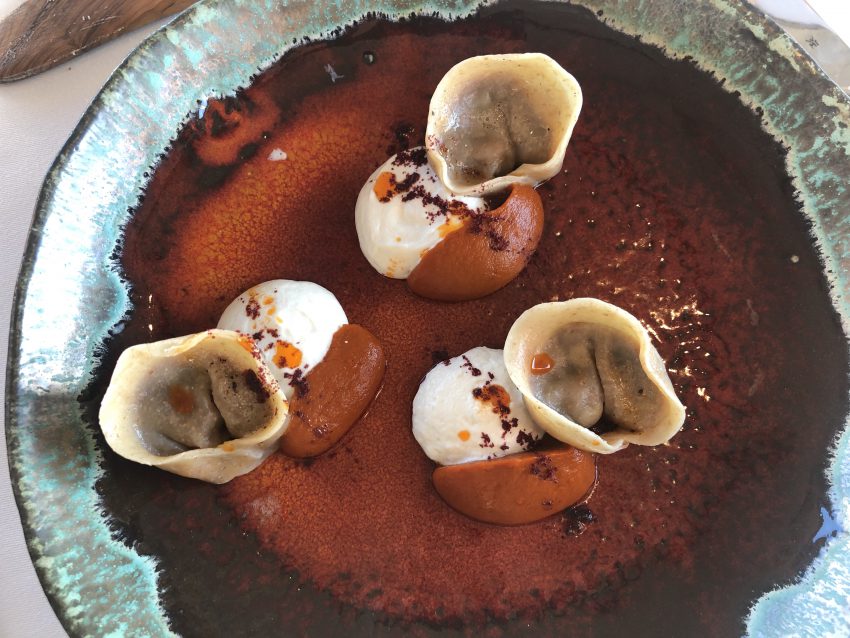 MENU HIGHLIGHTS Manti; steak
VALUE 7/10
AMBIANCE Sweaty tourists and international foodies
SERVICE Good
WOULD I GO BACK? Recommended for the view and the rooftop bar if you have some spare cash, but not if you’re saving up for a select few Michelin venues on your Eurotrip

Mikla is a destination restaurant for lovers of fine dining visiting Istanbul in Turkey. The most redeeming quality of this restaurant is the view of Istanbul from the rooftop of the Marmara Pera Hotel. Get there early and order a cocktail in the sun.

In 2019, Mikla was the 52nd best restaurant in the world. The more I delve into the World’s 50 Best list (which actuallly ranks the top 100 restaurants in the world), the more I’m disillusioned. After Attica was named 20th, which, although excellent, I don’t think tops Melbourne, my expectations of the list were watered down. But my curiosity remains.

What seems to qualify a restaurant for this ‘World’s Best’ list, joining the dots of my visits to other restaurants on this list, includes: being tourist-friendly, championing local cuisine, having excellent service, theatrical presentation and innovative food. Flavour seems to be a long way down the criteria checklist. I never prefer a polished glass to a buttery bite. Many people dine out to be doted on, whereas I go to put magic in my mouth.

Mikla drew us in, as we found ourselves in Istanbul wanting to branch out from the kebabs and döners that dominate local diners (which we loved! Not to mention gozleme!)

$80AUD per person (if we were strict with ourselves) seemed more than reasonable, given Mikla’s claim on the world stage. My estimates turned out to be too conservative, getting away with three courses for $111AUD (the most minimal option).

Manti was easily the nicest dish, and it deserves its signature status, typically pictured beside Mikla’s name. It was very simple. A Turkish ravioli is filled with slow-cooked lamb shanks (with nothing else detectable inside). The three parcels would have been dry and bland if it weren’t for two simple accompanying sauces: harissa and smoked buffalo yoghurt.

Instead of ordering dessert, we opted to order a second entree. The prawn was sweet but the bean paste stuck to your palate and had dried out. Duck was ordinary but not bad.

We deeply regretted filling up on bread, which was the highlight of the meal for me. The crust crumbled and pulled on the elastic fluff inside that steamed as it was set down on a ceramic bread runway. No harm was done by the salt flakes, pond of oil and small scoops of blue-cheese style sheep’s butter marshalling the slices up and away.

The beef rib steak was fabulous, but sadly over-cooked. There was no juice-bleeding pink centre (we asked for ‘medium’, but it was ‘well done’). The height of sin at the table, in my opinion, is waste. And we simply couldn’t finish the last two pieces of beef. I can only think of two other times when I’ve ever left food on my plate at a restaurant. The strange, shy, teaspoon of seeded mustard on the side was unnecessary – but the plate of vegetables we each received was the saving grace of this dish.

I can never defame a snack, because it’s a gift from the chef to prepare the palate. It’s always appreciated, and always necessary. But if we’re talking about an opportunity to impress, these guys fell short. The anchovy laminated onto a crispbread (also a signature dish) was disconcerting. The anchovy lacked the familiar oily, salty flavour and was grainy, like eel. The gurken topped with cheese was so lightly pickled that it’s short life tasted unprepared.

As you can tell from the way the light falls on the food, the tables quickly became hot and we became sweaty. It’s not somewhere you feel like eating rich food.

Overall, it was a good restaurant but its world ranking is a bit silly.

Experiences from earlier in the day