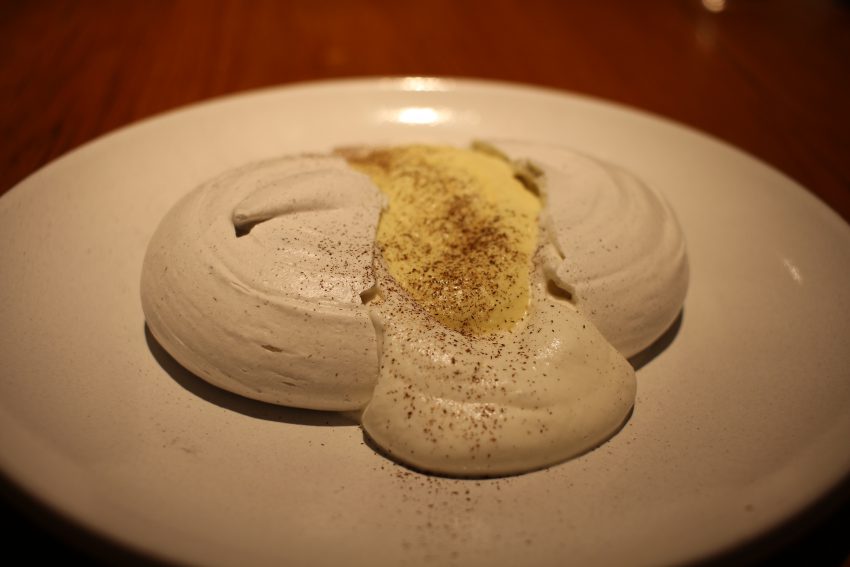 MENU HIGHLIGHTS Husk meringue
VALUE 5/10
AMBIANCE Spotlit tables trying to raise Mexican to what it is not – the fanciest brunch you might ever go to
SERVICE Good
WOULD I GO BACK? No

They really sell you with that irresistible image of oozing meringue. And it’s the cover photo for this review. Cosme’s corn mousse and meringue dessert was a clear highlight, but boy was this place overrated. Cosme is listed as number 23 on the World’s 50 Best Restaurants list. It certainly is not.

If you read more deeply into the food media creating the hype around Cosme, it can be distilled into: fancy Mexican food. The hype is an understandable political tribute, raising the bar on what we might ordinarily perceive to be street food. But who says street food can’t be better, and tastier, than a deconstructed, high quality version of the same?

I am so glad we visited Cosme for brunch, with a cheaper, abridged menu.

More rhetorical questions follow: who couldn’t like a tostada? Of course, we ordered the Arctic char tostada with salsa macha ($25). It was basically cured fish on toast, which was good.

Underneath another surprise, grey-purple tostada, lay the seafood sea buckthorn aguachile with red onion and avocado ($27). This reminded me of crudo but with a sauce. Nothing special, but I liked how much seafood was on the menu.

We could not go past the sound of duck enmoladas even though we had no idea what they were. It was quite shocking to be presented with the black sauce that was the ‘mole negro’ (a Mexican sauce including chocolate, chilli, herbs and nuts). We did not like that sauce, although the duck was good. It definitely needed the side of crème fraîche. Ugly, but not delicious.

The black bean puree with lobster and chorizo ($27) was delicious, and definitely worth ordering. I savoured every bite. Again, this is not blow-your-mind food, but it was good.

So far, we’d spent a lot of money, but shared between four people, we were still pretty hungry. Thank God for the lamb barbacoa with shishito peppers, quelites, avocado and salsas ($79). The lamb fell apart and was the most well cooked item we’d eaten so far.

Dessert was the famous husk meringue with corn mousse ($19). This was the climax of the meal. For an Australian diner, this was a really special pavlova.

At the end of this meal, we’d spent US$219, excluding tips. For US$50 per person, it just ain’t worth it. I would prefer ‘ordinary’ Mexican food.