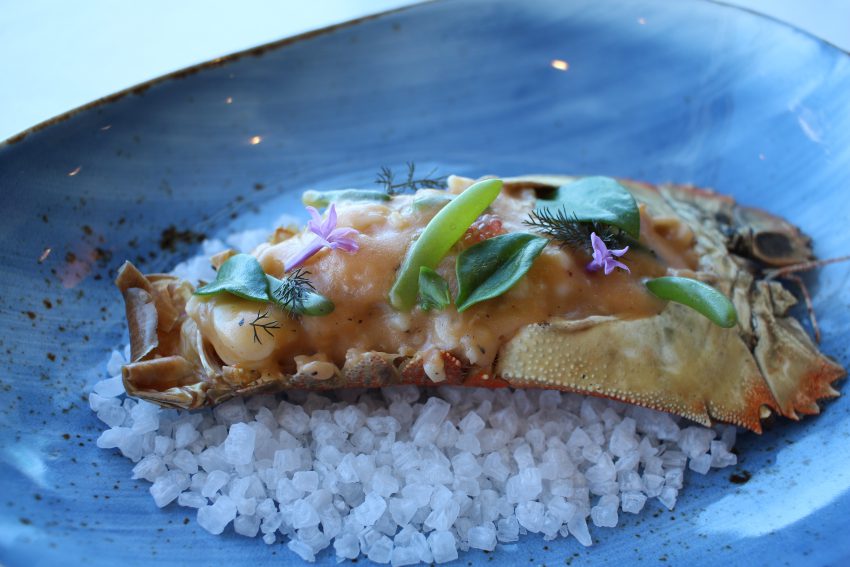 Still the better-than-Icebergs of the northern beaches.

MENU HIGHLIGHTS Any pasta and any seafood entrée (or stick to the seafood tower for two)
VALUE 8/10
AMBIANCE Wedding bells and windswept couples
SERVICE Ideal (if you disregard some in-training youngsters)
WOULD I GO BACK? I do every year for my birthday!

Jonah’s is quieter, with a better view than the other main fine dining option on the northern beaches – Bert’s.

This was my third birthday visit to Jonah’s (previously reviewed in detail here). Some significant changes to the menu since my last visit include removing the mind-blowing crispy seaweed potatoes from the menu. Some other of my favourite things have disappeared, namely: the complimentary chocolates gifted at the end of the meal, and the parmesan snow over the squid ink pasta.

I can never fall out of love with a window table with that glorious view over Whale Beach.

We went for the three-course menu for $110. Two of the three of us were very grateful to the restaurant for being flexible enough to allow us to order two entrees rather than a dessert each for dietary reasons.

It’s always amusing and delightful the way their complimentary snacks are presented in a tiered wooden box. I liked the potato gems best, served warm, but that feels like cheating.

We were not disappointed by the complimentary bread rolls either, also served warm. I have to admit, nonetheless, I miss that stellar focaccia they served on my first ever visit.

My partner order a very liquidy, creamy basil risotto with crispy pancetta, pine nuts and aged balsamic vinegar. I had a cheeky spoonful and it was delicious.

We could not help but laugh when they brought out a hiramasa kingfish dish with a little jug of green tomato water. Which was the lightest, healthiest ‘broth’ we’ve ever had.

I ordered the Moreton Bay Bug as my second entree, with a thick, generous ‘bisque béchamel’ that knocked my socks off. The garnishes were unnecessary but aesthetic. The Bug was slightly overcooked as it was not as juicy as expected.

Crab and linguine are two words I like to see next to each other. Although this iteration is less exciting than the carbonara version served on our first visit, the roasted cherry tomatoes and crunchy pistachios, with a chilli kick, was packed with flavour.

I was surprised by the masterfully formed veal and pork ravioli when it came out very much swimming in a smoked leek broth. The broth was quite charred and salty. That fantastic parmesan custard, at risk of being hidden and overtaken by the broth, was a game changer.

We all ordered fish for our main. Nothing to see here folks. Just some clever little flavour bombs accompanying sweet, soft fillets. The Murray Cod came with chicory, an orange and saffron emulsion and chives. The special (‘wild caught fish’) came with a bell pepper cream and caper leaves.

Faithful to our savoury theme for the day, the cheese option for dessert was such good value. Four cheeses, including a Pecorino and a brie, was buddied with Jonahs’ own honey, a fruit-toast and thin crispbreads, pecans, dried apricots, dried figs.

We got some nutty and delicious chocolate treats for by birthday enjoyed at the end. Jonah’s reaffirms itself as a very special, long-lunch beachy treat. We usually go for a swim afterwards, even on a colder afternoon. It’s a transportive experience to be savoured.