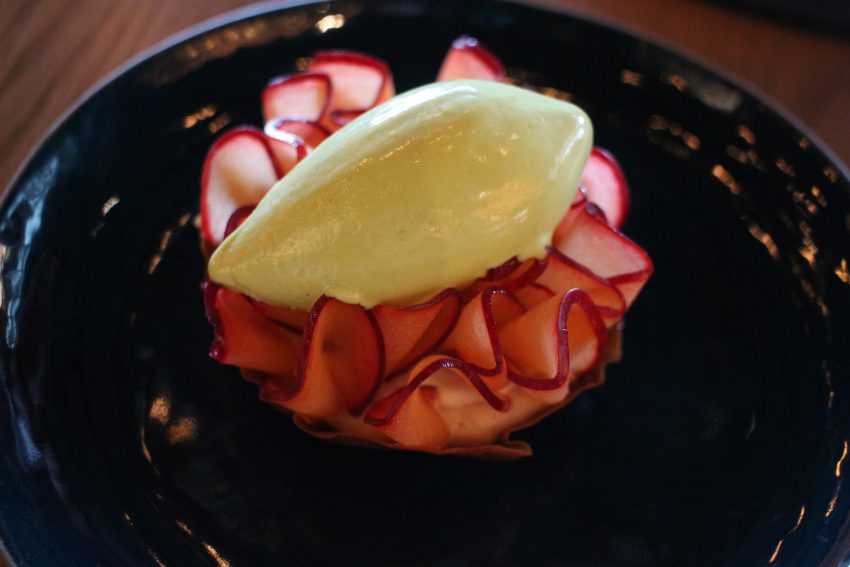 MENU HIGHLIGHTS The. Beef; fruity dessert
VALUE 7.5/10
AMBIANCE A fancy adventure through sea and land
SERVICE Good
WOULD I GO BACK? To explore the labyrinth of the menu further; when I am rich enough to order that top-end beef

Only after visiting this restaurant do I now understand what seemingly overly critical critics mean when they say “I was confused”. Maybe I was more overwhelmed than confused, but I thought this menu was ‘too much’. This was evident in two of our dishes, having ordered 5 of the 56 items on the ‘Food Menu’, being presented in exactly the same way, covered in supermarket-style nori sheets (discussed below).

Don’t get me wrong, Woodcut is excellent. The beef is outstanding.

The concept of the restaurant, we are told, is to organise food by the method of cooking, including: raw, wood oven, wood grill, ash grill, salad wall, vegetable counter, cold seafood counter, and steam kettles. There’s a very wide range options and they don’t all seem to marry. Nonetheless, if you want to experience Woodcut in all its glory, you have to commit to surf and turf, leaving room for dessert.

The space is large, with (seemingly) three open kitchens: one near the entrance, one in the middle, and a split kitchen in the back.

It’s only after you’ve visited that you are in a position to decide on where you wanted to sit. Outdoors seemed too risky, as Barangaroo can be windy. Indoors risks being too dim or noisy (which it wasn’t). I must admit I regret not picking a ‘bar’ seat, where you can sit around the middle kitchen and watch the food being prepared. There’s plenty of room and the seats don’t look uncomfortable. Having said that, the chef’s timers going off every few minutes was rather alarming, even from the indoor seating area.

I was pleased to see seedlip on the cocktail menu, last seen at Dinner by Heston. Seedlip is a masterful, non-alcoholic spirit often blended with botanicals. With half an eye on the serious-looking bar, I couldn’t resist the mention of elderflower in the Rosie Cheeks cocktail ($19).

This is not a restaurant that brings you bread on the house, so we ordered the sourdough and cultured butter ($6). With four tempting bread options to choose from, Woodcut is starting to feel like Ross Lusted, Woodcut’s chef-creator. The couple across from us were politely battling through a storm of sesame seeds, so beware of the wood oven sesame bread ($7).

The crab cakes ($28) were fresh and juicy, although needed a little more crab and a little less cake. I really didn’t notice the oyster in the oyster mayonnaise underneath, which I think was a good thing.

I also think they should specify on the menu that you’re ordering three crab cakes. Mind games were resolved by splitting the third in half with my partner.

A surprising highlight was the grilled raw beef with salted duck egg ($32), scattered with radish and enoki. The beef was superficially charred, the smokiness of which blended so well with the egg mayonnaise. The beef must’ve been offcuts from top quality leftovers because its quality was stunning.

As a side dish to the main course, we couldn’t resist the shiitakes, piped with a mushroom butter ($18). I recall mushrooms being one of Lusted’s speciality ingredients at his previous, once-three-hatted restaurant The Bridge Room. Lusted’s fungi skills remain intact.

It was disappointing to have a few pathetic seaweed sheets covering two dishes in a row in the same way (as pictured in the two photos above). It felt like lazy plating. The semi-limp, semi-crisp seaweed added nothing to the beef dish, which needed another kind of fresh vehicle (such as a lettuce leaf). The sheets were too large to be integrated into each bite.

Given the price tags on these dishes, your ordering strategy has to orient to one of the showstopper dishes – from a $140 wood-grill Scotch Fillet, $200 Rib eye, $660 caviar to a $57 lobster. We went with a humble, bone-in, dry-aged sirloin ($65).

Burnt by experiences at other top restaurants, I’ve often found the pricier, dry-aged meat is simply…too dry. I also find expensive, lean cuts to lack flavour. Meat cooked on the bone is the tastiest, and this sirloin was no exception. Perfectly seasoned and faultless.

If you order from the wood grill, you face an agonising choice between condiments: béarnaise sauce, mustard, Paris butter or veal jus. They calmed us down by allowing us to order the latter two. A major positive was that they brought the sauces out in mini jugs, so we could pour them over periodically as we pleased. And we were pleased. I’ve never been served Paris butter as a sauce before but it could not compete with the thick, salty jus.

Dropping from high to low, the Maremma spiced duck ($65) was very disappointing. It was a must-order dish for me because Lusted had, at his previous restaurant, served a very memorable, crispy segment of duck. This was a huge, half duck, slow cooked. It was pink on the inside, slightly dry, without much fat and no crispy skin. It had little flavour and, frankly, was boring.

The only solid expectation I had of Woodcut was to be blown away by the desserts. Lauren Eldridge, the 2015 Young Chef of the Year winner, awarded by the Sydney Morning Herald, is Woodcut’s pastry chef. Well, she was at the time we visited. She has since been poached to the kitchen at Berowra Waters Inn. As the best restaurant I visited in 2020, I will be back there once she’s settled in. I have been drooling over her desserts for years, but she’s been working interstate at Stokehouse (and previously overseas at three-Michelin-star venues Le Cinq and Guy Savoy in Paris, as well as Osteria Francescana in Italy).

Ribbons of plum surrounded a wondrously thin tart shell filled with a salted caramel creamy element (mousse, diplomat or crémeux?), topped with an impossibly-creamy pistachio sorbet. This dessert was excellent – the best value (and second best) dish at $19.

The second dessert we went for was far richer, mysteriously described on the menu as chocolate, wood toasted hazelnuts, hazelnut milk ($19). The chocolate could have come to the table in any form. This chocolate was a very dense, very rich version of a mousse. Basically Nutella. The hazelnut milk was not strained and added a graininess to the dessert. I was impressed with the clever, visually indistinguishable, pops on the top. What looked like a roasted hazelnut on the spoon could be a light-as-air, white or brown, kind of giant rice bubble.

In many ways, Lusted is clearly trying to ‘keep it simple’ but luxurious. There is no doubt Woodcut is working with Australia’s finest ingredients. I was a little underwhelmed, but the breadth of the menu will require saving up for a return visit. I’d like to know how close Lusted is to the passe at Woodcut.