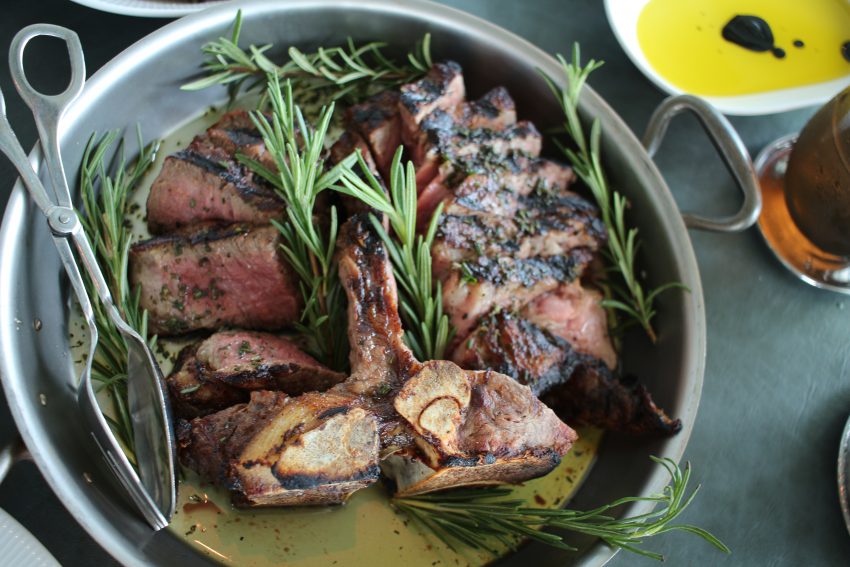 MENU HIGHLIGHTS Pesto at the table; tuna tartare
VALUE 6.5/10
AMBIANCE An invitation to wear designer, seated on velvet
SERVICE Enthusiastic
WOULD I GO BACK? Maybe for the signature cotoletta, or if they become more like Ormeggio

A’Mare is more like the Otto of the west side of the Bridge than it is like Ormeggio, its sister restaurant. It attracts the same demographic as the Finger Wharf in Woolloomooloo. The food, like the fit-out and the view of the harbour, is for show. There is no danger of forgetting you’re in a casino.

Alessandro Pavoni is one of my favourite restauranteurs and operates a’Mare, as well as the standout restaurant of the Sydney Restaurant Group, Ormeggio.

I recommend entering Crown’s ground-floor restaurants from the water side (a’Mare, after all, means ‘by the sea’). If you enter from Barangaroo Avenue, you face queuing behind guests checking in, luggage collectors and lost tourists.

My favourite dish was the first one we were served, the famous trofie al pesto ($35) crushed at our table with a giant mortar and pestle. Trofie is a thin, fairly short, twisted pasta. A perfect hiding place for the little bits of crushed basil, macadamia nuts and pine nuts.

Casoncelli ($34) is our second course, and the second type of pasta I’d never eaten before that day. You’re meant to be impressed, and you are. What may seem try-hard is really a tribute to Pavoni’s Lombardian heritage. What is essentially a ravioli is filled with pumpkin and topped with toasted hazelnuts, crispy sage and snowed over with Parmigiano Reggiano in burnt butter.

We could not decide whether to spend our budget on seafood or meat but we went for the jugular. The bistecca fiorentina ($160) is the showstopper on the menu.

Expecting to be blown away, we were disappointed when our ‘medium-rare’ order came out very well done (where none of the sliced pieces of meat were pink) and dry. I have never in my life, until now, sent a steak back at a restaurant. I was ashamed to do so but this meal was simply too expensive to eat tough.

The waitstaff immediately agreed to replace the dish. On round two, we got the 1.2 kilograms of dry-aged Angus beef in rosemary oil we’d hoped for the first time.

In addition to round two, the restaurant apologised with a side of sweet potato rosemary wedges (usually $14) and some focaccia ($14).

Those side dishes really were a guilty pleasure. Carb on carb.

Another great dish which displayed a hint of Ormeggio aesthetics and standards was the Yellowfin tuna tartare with colatura di alici (the Italian, anchovy version of fish sauce), toasted slivered almonds and finger lime. This is no longer on the menu.

Given how fantastic the desserts are at Ormeggio, we expected the tiramisu ($18) to blow us away. This one was blissfully mild on the alcohol front, but didn’t seem to be set. Guy Grossi and the folks at Fratelli Paradiso still do the best tiramisus in Australia I think!

I had huge hopes for the gelato, which is absolutely outstanding at Ormeggio. I was initially disappointed to see only one flavour on offer, and a plain flavour at that: fior di latte ($20) (milk and cream, i.e. milk-flavoured gelato). This gelato was less aerated and more icy than the one I’ve gone back for many times at Ormeggio. On the upside, the waiter offered us a selection of toppings to choose from – like a bougie Cold Rock. We chose pistachios, pistachio cream, cocoa nibs and chocolate sauce (the latter was bitter and oily). You’re not meant to mix up all the flavours, obviously, but, like Terry Durack, we could not decide. I can confirm the pistachio combination is the way to go.

It seems to me the pasta, as expected, is easily the must-order part of the menu. I’m already saving up for another visit to check out the seafood in more detail.