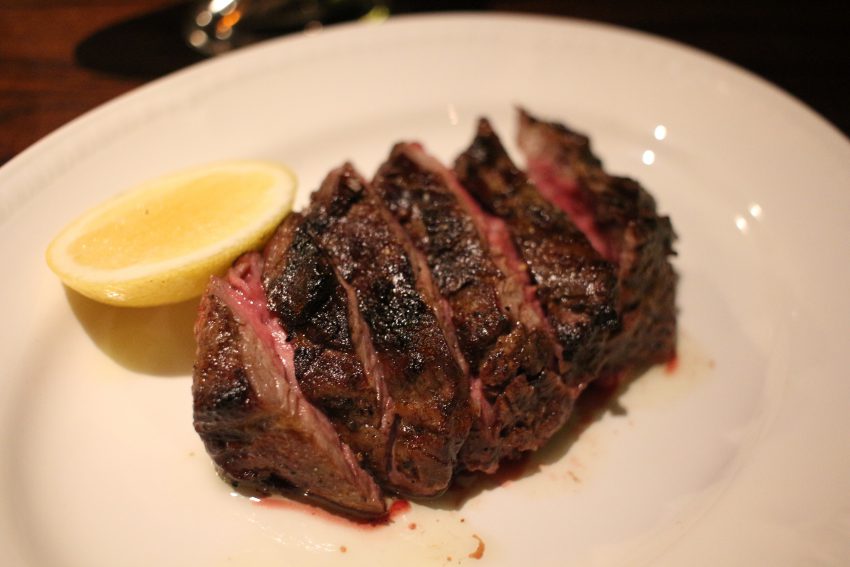 A carnivore’s underground den of fat-niquity.

WOULD I GO BACK? For sure

A meat house that’s not a steakhouse. The Gidley is original.

Enter the carnivore’s den from street level, down a decent set of stairs and into a bar serving an abbreviated version of the restaurant’s menu.

The walls are lined with large, round velvet booths around which a curtain may be drawn. Similarly, in the main dining room, every now and then waiters disappear through a barely perceptible black door in the back corner of the room. The yelling and laughter briefly emanating from the door when it opens piques our curiosity as to what goes on in that private dining area (with a minimum spend of $2500 + 10% service). There’s also a hidden ‘library’ back there somewhere, where games of poker are hosted by the restaurant.

Be warned, the waitstaff take away your phone and put it in a monogrammed purse somewhere it won’t distract you. “Immerse yourself in the experience”, they seem to be telling you, “it’s compulsory”.

If you are directed to the bar on arrival while you wait for your table, you might order a banana split old fashioned ($22) and a burger. Both need to be unpacked here as they’re extraordinary.

For me, at least, a whisky glass with a giant ice cube in which a single, dried slice of banana was suspended was not what I envisioned when I read “vanilla ice cream washed Jack Daniels, Tempus Fugit creme de banane, salted maple syrup, smoked water” on the menu. Ignore why I would order such a ridiculously-named drink. It turned out to be the most palatable old fashioned I’ve ever made the acquaintance of.

Now, the Gidley burger ($23). They’re not exaggerating when they try to convince you to order it because it’s “the best burger you have ever had”. It melts in your mouth in the most literal way. The meat is juicy and not over- or undercooked. The melted cheese is American cheddar. Plastic, but not too plastic. It’s balanced with pickles and the most gloriously light and toasted bun.

I’ve since been back to the restaurant to re-order this burger, which was still fantastic although slightly less ‘pink’ and moist (when overcooked, the retired-dairy-cow patty gets dryer). The fries ($9) are delicious and overtly comparable to non-soggy Maccas fries.

As a complimentary starter, the restaurant served us a savoury bagel that was almost like a hybrid of shortbread and focaccia, it was so light and flakey. One of the highlights of the meal for me was the beef fat butter. The fat must’ve come from their highest quality cuts, as it was just superb. The butter was whipped and light in texture.

Of course, I’d done my research and read some reviews of the meat dishes before coming. Whenever you have to choose between a range of pricey meats, you want to know what you’re doing. Luckily, The Gidley make your choice reasonably simple.

First, there’re the two rib eye choices. Either on the bone ($16 per 100g) or the ‘spinalis‘ ($60), described as: “220 grams, arguably the most succulent cut in the world”. This was the highlight meat for me, although I would be very curious to see how much more moist it would’ve been if we’d ordered it on the bone. This cut was good value because you could eat 98% of it (there was no gristle or inedible fat).

Second, recommended by Sydney’s top food reviewers, is the English cut ($53), 300g of prime rib roast. As you can see in the picture, there is a lot of inedible fat, and the meat is extremely rare. This was my partner’s favourite, but I found it was so rare that the flavour from the melted fat was missing. Bonus points for real shaved horseradish though. This cut also benefited from the moisture of the somewhat-caramelised meat juices that the spinalis was missing.

Predictably, our waiter convinced us into getting a side dish, probably expecting us to choose a less fatty option. Maybe a salad? We seemed to disappoint him in selecting the Mac and Cheese ($17) with gruyère, cheddar, parmesan and truffle oil. Although they nailed the crispy top, I found it slightly watery, with not enough cheese flavour (saved only by the parmesan).

The least impressive dish was the dessert. I did not like it. I ordered the ice cream ($11) which was a trio of buttermilk vanilla, chocolate cherry ganache and burnt caramel. The ice cream was icy and watery and too quickly became a soup. The cherry flavour of the ganache tasted fake in a slightly medicinal way.

Set your sights on the meat and the fats and you will do well for yourself.