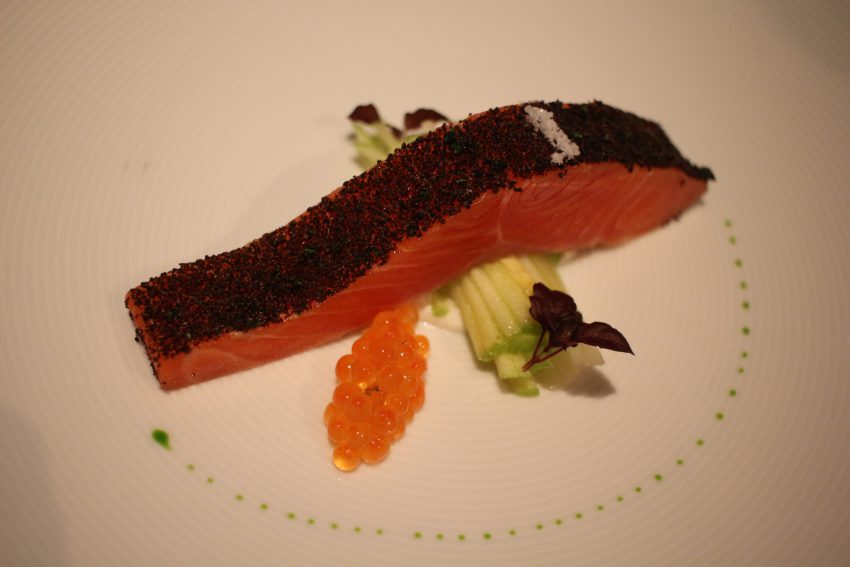 MENU HIGHLIGHTS Everything was equally good…the truffle butter was the cherry on top
VALUE 9/10
AMBIANCE Tranquil, classic and tasteful
SERVICE Ideal
WOULD I GO BACK? Money is the only reason not to come back every day of the week

Tetsuya’s has idled on my hit list for a number of years, as the menu doesn’t change dramatically and the establishment is so entrenched in name that you can easily predict what to expect. White tablecloths and a well-spaced, quiet dining room – apart from the trickle of a Japanese garden pond. This is where modern Japanese meets conservative fine dining.

Unlike most restaurants, Tetsuya’s consistently serves excellent dishes. Nothing terrible, nothing a cut above the rest.

I was surprised from the very first dish at the chef’s softening of stereotypical Japanese precision. Whilst the elements on the plate were daintily placed, they were not arranged together in any sort of exact symmetry. The Yellowfin Tuna sashimi was not sliced into a sharp-lined row and the charred eggplant dip underneath followed no pattern, with a thick texture and Mediterranean flavour.

The bread course was bound to be a highlight and satisfied my expectation that it be served warm with a ‘creative’ butter. Tetsuya’s butter was whipped, light and spiked with truffle. We would have bought it and taken it home if that was on offer.

I was surprised how quickly they brought out the signature dish of confit Tasmanian ocean trout, as I though this would be the climax of the meal. As the second course, it was light and eaten quickly. It felt strange to tear away at this thick fillet with teeth and chopsticks (we were hit by the impetus to cut it up and eat it more slowly).

The Patagonian toot fish with asparagus, smoked pil pil and finger lime was a show-off dish. The Japanese are the masters of toothfish, and this dish was no exception. As you can see, it was slightly overcooked, but not dry. I wasn’t sure if Tetsuya’s was adding native Australian ingredients to kick itself into this decade of indigenous food fashion, but it didn’t make a noticeable difference to the dish and seemed just for show.

On the other hand, the NSW Rangers Valley wagyu sirloin was slightly underdone (or at least, served too cool) because the fat in the centre was still fairly solid, locking away that melt-in-the-mouth flavour that would have heroed the meat more.

Served with pickled shiitake mushrooms that could be mistaken for sliced abalone, and wrapped in radicchio, it perhaps needed a jus.

Dessert time already, and we have a chocolate stone with a honey and milk gelato. The crumb provided the standard textural and structural aid to the quenelle, and cracking the chocolate ring around the pebble ticked the theatrics box.

Also meeting my expectations, petit fours were provided at the end of the meal. Both were delicious and French in style, which in turn is Japanese in style. The French techniques adopted by Japanese chefs struck me the first time I travelled to Japan. They are superior chocolatiers and I think they improve on the French.

You won’t be disappointed by a visit to Tetsuya’s, with few criticisms to make. Will it be the most memorable meal you’ve ever eaten? Probably not. The food is not rich, so you’re not bowled over by any of the flavours. It’s also not one of those ‘experience’ meals. It’s no frills, classic and delicious.