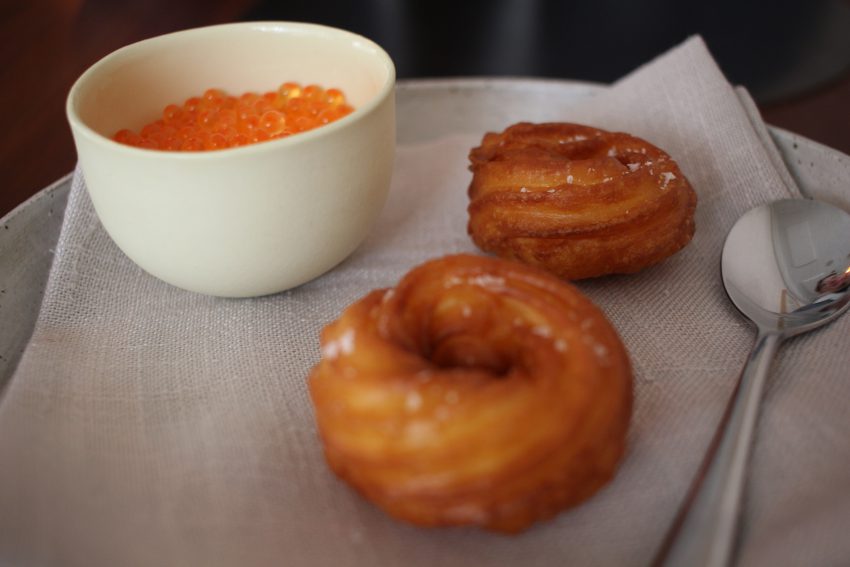 Reasonably simple and clever contemporary food. You won’t be overwhelmed by too many elements or ingredients. Sixpenny is tame enough for first-timer long-lunchers (who come hungry) and wild enough for those looking for an adventure.

MENU HIGHLIGHTS Cruller; malt vinegar and custard
VALUE 8/10
AMBIANCE Woke foodies (what else brings you to Stanmore?)
SERVICE Ideal
WOULD I GO BACK? I came back this time for a tart and the beef that was unluckily ‘out of stock’ on my visit; wouldn’t risk that again!

I like to start a long, expensive meal with something small, innovative and complicated. Sixpenny delivers on the brief.

I had never heard of it before, but the first bite of Sixpenny’s $175 seven course (changeable) menu was a cruller with mascarpone. It’s a savoury doughnut, to be topped with mascarpone and roe. These ones could have been cooked a little longer (a little doughty inside).

My heart swelled at the sight of their bread, which I KNOW is good. I have been looking forward to this bread since my last visit (read my previous review here). The butter is simple and the crust is crustaceous.

A wheel of three highly unusual bites were presented at the second round of snacks, trendily including a raw seafood element. Pai Tee with tuna resembles, but is not as good as, the tuna cone signature snack at LuMi. The other two snacks were also carried in tart vesicles, which were delicious but a bit disappointingly repetitive – a hemp seed tart with pear and artichoke and kombu tart with smoked eggplant and parsley.

Crunchy tart shells were cleanly followed up by cured bonito swimming in a cucumber and citrus pepper bath. I didn’t like the drowned raw fish with the skin left on, but the flavours were pleasant.

It seems Sixpenny is not above surprise-style presentation. The classic ‘look-what’s-underneath-that-you-didn’t-see-before’ technique is cliché, but if the flavours are there, I don’t mind. And they were in the kangaroo tartare hidden underneath a thin, circular sweet potato crispy topped with shaved dried cheese.

The most disappointing dish was the Spencer Gulf squid with mushroom and smoked squid broth. The mushrooms were amazing, and I would love to recreate them. But the shape and rawness of the squid had the texture of ABC spaghetti.

I was so looking forward to round two of bread. Coffee bread. It wasn’t as good as I remembered because you couldn’t taste the coffee!

The plates start to begin more sophisticated when the fish washes up. Sure, the Hapuka’s golden on the top but not overcooked, basking in a sour beer foam (which lives up to being sour), and somewhere in the background there’s a hint of lemon myrtle. I am not blown away. I want to be transported!

So far, it’s one of the least rich degustations you’ve had, so at this point you’re ready for their ace card. What is the big main that will knock your socks off? Last time, it was the chuck steak that left a lasting taste in my mouth. I was disappointed by the few slices of Borrowdale Pork loin, served in the malted barley and black garlic sauce that usually accompanies a solid slab of red meat. This plate was saved by a piece of fried kale and some spicy broccoli. You don’t pay the big bucks for a few pieces of pig. Very well done though.

I was licking my fingers after the dangerously soft and sweet pork ribs with fermented chilli. Pork two ways is certainly unusual.

And finally, I had come all this way in hope of trying their famous Saint Honoré tart garnished with black truffle during truffle season! Alas, I had the same insanely delicious dessert as I had on my last visit. Impossible to be sad about the Mead Vinegar custard with hand-plucked frozen raspberry seeds in a strawberry consommé. This dessert is what shows that Sixpenny belongs on the top shelf.

I also enjoyed the poached quince dessert, which was somehow so light and subtle in flavour. However, it is strangely similar in structure, sweetness and appearance to the previous dessert: sitting in a syrup, with a panna cotta texture and fruit on top.

The Madelines were absolutely perfect and impressively steaming.

Is it a coincidence that, in 2020, only Quay shares the same accolades as Sixpenny in the whole of New South Wales? And both restaurants finish their meal with the same petit four? There must be an important reviewer out there who loves a canelé.

Sixpenny ticks all the boxes of a celebrated and superior restaurant. I wouldn’t put it at the top of my list to come back to, but it was an excellent meal that I have critiqued on behalf of similarly priced restaurants which are not rated as highly. Uneasy is the head that wears three Good Food crowns.