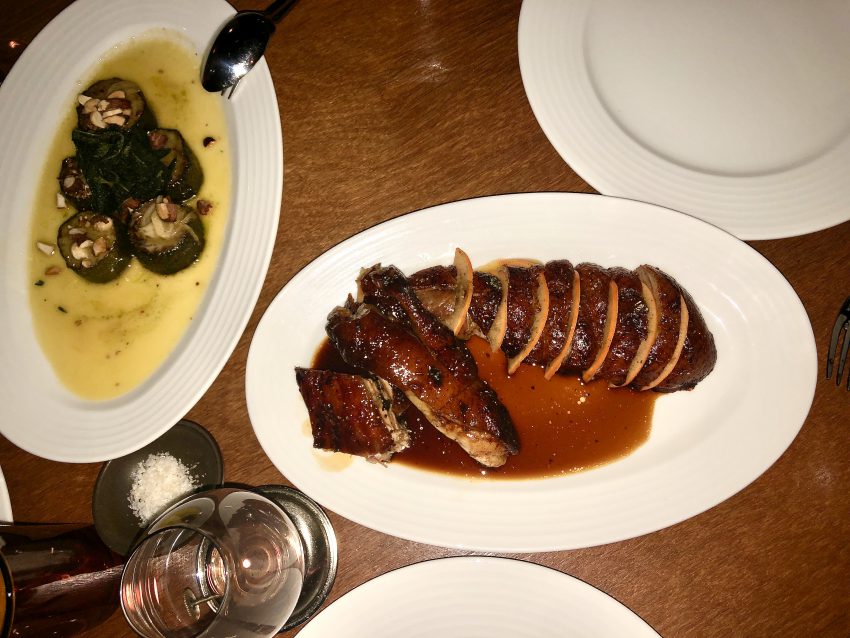 Jazz at the dinner table.

Mary’s Underground seems like a better venue to go drinking than eating. On most evenings, a few steps down to the sub-street-level restaurant takes you into a screaming den of jazz off Reiby Place in Circular Quay. The venue is dark, with low, red lighting.

Similar to Marys’ other venues, the ‘Get Fat’ theme prevails. The food is enriched by buttery, fatty flavours. Service is punk-rock professional.

Examples of small and pricey options include a single raviolo ($23) filled with an organic egg, pecorino and button mushroom. For $65, you can snag the most enticing, signature item, a dry-aged half duck. Segments of duck are infused with blood orange, and steeped in a persimmon and anise myrtle sauce. With no accompaniments, it’s hardly bang for your buck. The duck skin wasn’t nearly as crunchy, thick and fatty as the masterfully basted birds across the Quay at Mr Wong. With the exception of the jus that came with this duck–which had the yeasty concentration of Vegemite–Mary’s talent shines brightest in its sauces. Plates were scraped clean.

One such saucy example is the cauliflower velouté, poured over the vegetable pie ($34) filled with chestnut, cabbage and montagne cheese. Second best is the roasted and confit Jerusalem artichoke tortilla ($25), but there’s also a spanner crab, bottarga and salmon roe version on offer ($30). Simply note that your preconceived notion of a tortilla will not match the mound a waiter sets in front of you. It’s more like a thick, round frittata, cut in half.

Staring off with Cherry Moon malt sourdough ($3) and cultured butter won’t be a mistake, although the roll isn’t fresh enough to be warm. Likewise, the duck fat potato pave ($13) crunches as well as it sounds. The dutch carrots ($15) were my favourite sides, topped by an anchovy crumb.

Vegetarians survive the night as equals, if you order the pie, tortilla and truffle celeriac ($34). Roasted and braised zucchini ($12) is rendered acceptable by a scattering of crispy sage and smoked almonds.

I will never miss the opportunity to order a Bomb Alaska for dessert. This version ($18) was heavy on the alcohol, which permeated the meringue too much. The otherwise sweet igloo of eggwhite and ice cream hardly saw the light of day.