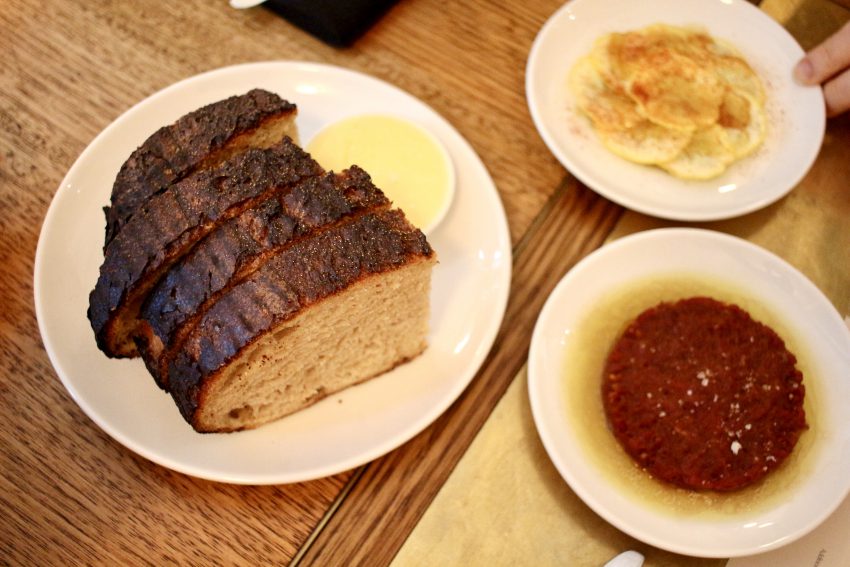 You need to do your research before coming to Arthur, otherwise the inflexibility of the restaurant’s menu might be a shock, particularly to your pocket. Arthur works out to be $80 per person, with absolutely no choice regarding what you’re served (apart from dietary requirements). I dined with a vegetarian friend, and three carnivores – we tried the vegetarian version of each dish, and it was consistently better than the protein-based dishes. I’d highly recommend impersonating a vegetarian for the night if you’re not allergic to greens. Nevertheless, if I was a vegetarian I’d feel a bit ripped off paying $80 – they’re not using expensive ingredients.

My two biggest criticisms of Arthur are the portion sizes, and the serving style. I disliked how small the portions were considering the meal was share-style. Sharing one small plate between three people (see pics below) meant, for instance, eating one thin slice of tomato each; one carrot each; or only having one third of a small fish fillet. This is not well adapted to sharing. Nor was the food itself appropriate for sharing. (Who shares a fish fillet? Or an already small tomato salad loaded with tiny elements which had to be dished out painfully evenly in order for everyone to taste everything?)

There’s also a bit of wankery involved in the decorative flowers and organic-sounding sprinkles of bush dust swallowed undetected.

The dish descriptions are typically mysterious and misleading, to the extent you don’t know the form or quantity of any ingredient listed. It’s been fashionable for a while for restaurants only to list the main flavours/ingredients in a dish. For instance, “vanilla, berries, malt” turns out to be a vanilla slice, possessing an upper layer of berry jelly, served with whipped malt cream. “Carrot, verjuice, nasturtium” is a carrot and white wine puree topped with four small carrots.

Other dishes answered more to their labels, since they were just that simple. “Dry aged Borrowdale pork loin, leeks, mustard greens” was a sliced lineup of porky softness, sided by token greens.

To begin, we all get a slice of well-risen Arthur’s sourdough. It’s not warm. The cultured butter is your usual Pepe Saye type. This is the standard I expect of one-hatted basics.

Tightly packed in a circular pond of oil sits a kangaroo tartare with bush tomato, shallot and mountain pepper. It’s superb when stacked on the bread, but they’re cheating here a bit. Serving the bread at the same time as the tartare means the one slice you’re allocated has to double as your tartare vehicle. They should have separate crackers/vehicles for the tartare.

One scallop each, with flavour that was hard to detect. This dish certainly wasn’t buttery.

The tomato dish was fresh, but ultimately hugely lacking lardo. After being divided into three portions, I only got one almost invisible lardo strip (and only one disc of tomato).

The lamb fat must have been used to roast the beetroot in, because this dish didn’t taste particularly fatty or rich.

The mango parfait must have been removed from the freezer just before being served, because it was far too hard to eat when it arrived at the table. We had to wait a while for it to defrost. The mango flavour was too subtle. The best part about this dessert was the macadamia biscuit on top.

Overall, you come away feeling clean and lean (and hungry!) I wouldn’t go back unless I was on a health kick or bringing a vegetarian, because it’s neither super tasty nor filling. None of the dishes were terrible though, and I enjoyed the consistent standard. They seem to have the potential to do better.