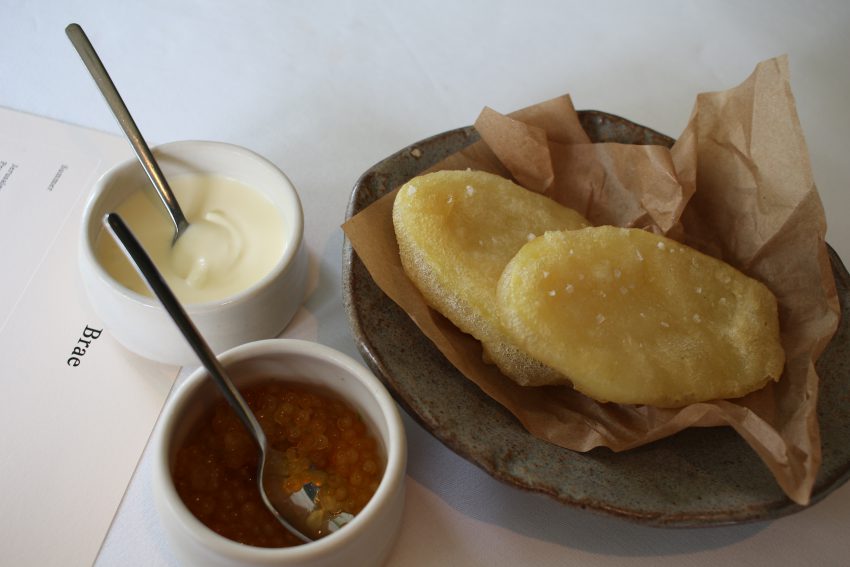 MENU HIGHLIGHTS Jerusalem artichoke and lobster; prawn head and kohlrabi
VALUE 5/10
AMBIANCE Foodies with petrol and money to burn
SERVICE Ideal
WOULD I GO BACK? No

If you haven’t read Hans Christian Anderson, please update yourself here before proceeding. You really need to understand that this restaurant epitomised Anderson’s story of The Emperor’s New Clothes. Everyone, including the country’s top critics, raves about this restaurant. Apart from Attica, it’s the only Australian restaurant in the world’s top 120.

The best part about Brae – by a long shot – was the service. We had extremely friendly, unpretentious and courteous waitstaff. My friend didn’t like how almost every interaction was with a different staff member, so we didn’t build a rapport with anyone in particular. Nonetheless, they each did a great job and were able to laugh in sympathy with our reactions to many of the dishes.

After each dish we were asked questions like “did you enjoy that?”, “that one’s great, isn’t it?”, “how was it?”… We did not know what to say, except to nod or say something non-committal like “great” or “mmm”. Criticism wasn’t going to give us back our money.

Who could believe we drove for four hours (two hours each way), only to pay $290 EACH for a disappointing meal, PLUS $12 for coffee and tea. We were shocked at the cheapness of the ingredients (wagyu, where were you?) and the small quantity of food on the menu. But this $12 addition at the end (without warning us of the additional cost) put the nail in the coffin. Without wanting to sound wholly jaded, the tea wasn’t even good.

Our experience was so surprising, and we were in such disbelief, that we spent most of the four-hour-dining time observing the other people in the room. We had to know if we were being too picky. Interestingly, nobody else appeared to be in ecstasy, or even raving or talking about the food. Most people were preoccupied by wine, staring into blank space, or making quiet conversation. We weren’t the only ones who found talking points in the art on the walls, or giggled when one of the chefs mysteriously sprinted past our window and sped off into a paddock to restock (on a herb?) only to come running back to the restaurant’s kitchen.

Matt Preston was seated across from us with some other delicious magazine celebrities, including Anthony Huckstep and Warren Mendes, and they spent as much time outside as inside. The head chef Dan Hunter came out to converse with Preston’s table and greet them towards the end of their meal, but did not talk to any of the other diners. This was another notable absence of the courtesy shown by some other world-ranking chefs, like Ben Shewry or Massimo Bottura, who serve and greet their guests at some point during the meal.

The first two ‘dishes’, if we are to give them the respect of not calling them ‘snacks’, or ‘bites’, were my clear favourites. The first was a bite of fried Jerusalem artichoke filled with southern rock lobster. The second was a flash-charred prawn head with kohlrabi, which you were supposed to roll up like a wrap. But what did they do with the prawn tail? Does this take the concept of ‘no waste’ too far, where the head is served without the tail? Can you believe that these two items were listed as the first TWO courses? At any other top restaurant, these would be considered snacks (not even starters).

Rather than serving each course individually, the prawn ‘dish’ was on a plate above a bowl of broad beans, young garlic and asparagus, with egg yolk and fermented rye. Apart from the freshness of the greenery, there was nothing special about this.

Certainly the dish that made us laugh the most was the “dutch cream potato cake with cultured cream and brook trout roe“. It was a hot potato scallop. And the local fish and chips shop might win in a blind tasting. The cultured cream was just like normal double cream, which melted off the potato cake (without enough body to remain on top of it). The roe didn’t seem to do the cake any favours.

The rationale for serving an iced oyster still confuses me. “Don’t eat the rocks,” joked the waiter. “Once you find the oyster, eat it one small spoonful at a time.” Meanwhile, the couple on the table opposite us downed their oyster ice cream in one gulp, and did not appear pleased in the aftermath. My friend felt nauseous from the spirulina/matcha sprinkled on top. We particularly observed the reactions of a few other diners to see whether we were the only ones who weren’t happy. Unsurprisingly, one guy handed his oyster straight to his girlfriend, who took two for the team. The waiter who collected our plates described it as “mind-bending”. Not untrue.

Now we were getting to the point where the disappointment had really set in. You have to be kidding us when this singular bite of mysteriously described ‘croissant’ counts as AN ENTIRE COURSE on the menu. And it was served at the same time as THREE OTHER SNACK-SIZED ‘COURSES’. I was flabbergasted. Here they are:

The third snack-level satiator was a green soup. “This is the sort of cabbage soup that I imagine Charlie’s family lived on in Charlie and the Chocolate Factory,” observed my friend. It certainly was watery and tasteless (apart from the seasoning).

After these three ‘main’ courses, my friend was convinced we were in the Truman Show. At any moment, the walls of the restaurant would fall down and we would be told that this was all a joke, to mock whoever was going along with this. They cannot possibly be charging $290 per person for this. How could this be compared to Attica, or Vue de Monde, or any other two or three hatted restaurant?

And, just before the final main course, we received bread…?

The waiter boasted that this butter was unbelievably light. It turned out to be more like accidentally over-whipped cream. The cream was sour and the bread was bitter, with a burnt crust that was more crumbly that crusty. Remarkably, I only ate the one piece I was given. The bread was cold.

I quite liked the hapuku and brassicas with crustacean butter. The fish was clean and steamed, as was the wanky mustard plant. “This reminds me of a dish for people who need to go on those FODMAP diets who can’t eat flavour,” was the feedback my friend gave.

Aged Pekin duck roasted on the bone was served with whipstick wattle and slow cooked beets. We were already disappointed by the missing letter in the description of “Pekin” duck. Turns out this was a duck refugee. Pekin is an American breed. So much for the natives.

The beetroot had the texture of dried figs – chewy and very sweet. The duck skin was not crispy at all. The dish was served cold.

Certainly the best dessert was the palate cleanser, known as red flowering eucalyptus ice cream, on a bed of red currants stewed with rhubarb and mead. This dish was the only one that caused the couple adjacent to us to genuinely compliment the waitstaff. We also thought it was refreshing. Strange, though, to serve two ice creams in one degustation, neither of which had the perfect texture. They were both icy.

Another savagely accurate comment from my friend on the hot and cold choco lemon: “this is like one of those gimmicky things you get handed when you first enter a Balinese resort hotel”. It didn’t taste any better. It was neither hot, nor cold. There was some sort of luke warm liquid that could have been watered-down lemon juice underneath. Otherwise, this was just dolled-up dark chocolate mousse.

The parsnip and apple cigar was crunchy and sweet. One bite led to half the filling dripping out the other end of the cigar and into our empty lemons. We didn’t bother to delve into the lemon to retrieve our losses. Overall, it tasted like a banana chip.

Instead of bringing petit fours, we were gifted a small plate of strawberries grown on the property. They were room temperature, and squishy. “I imagine this is how strawberries taste when you accidentally leave them with your groceries in the car boot overnight,” said my friend. Brae had included some absurdly mini ones to prove they were organically imperfect. As far as I’m concerned, all that matters is delivering something delightful to end the degustation. I can’t say I was delighted.

The dining room was small, covering the length of the refurbished house, with about ten round tables. We enjoyed the natural lighting of the space, and how it looked onto Brae’s green property and carpark.