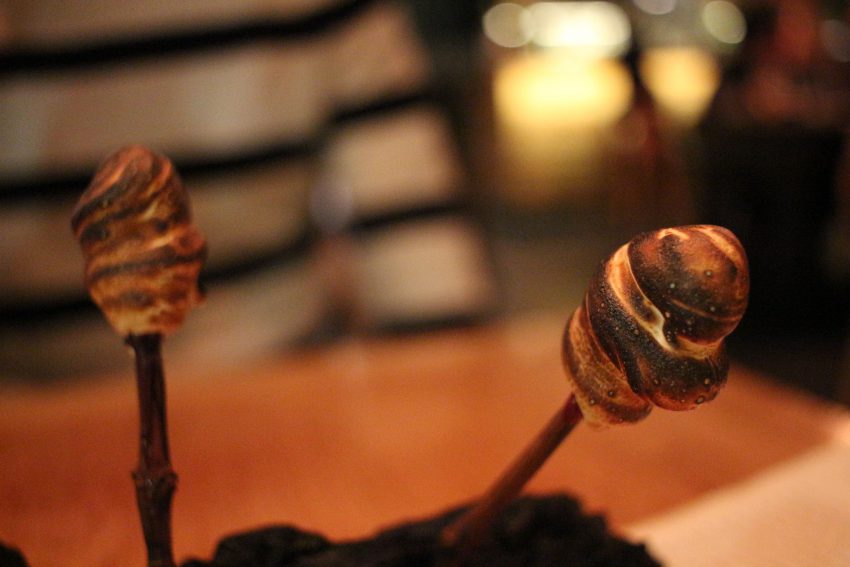 Now that I’ve had the chef’s menu for $150, and tried the famous rib eye steak on a former visit, I’ve seen what Firedoor has to offer. I found it impressive in a technical sense – fire and food meet in a considered and innovative way. The flip side of fire, I suppose, is that nothing is warm enough because it is more difficult to time the co-ordination of all the elements of a dish.

Firedoor’s been in consistent possession of its two Good Food hats. It’s very highly ranked (26th in Gourmet Traveller’s 2019 rankings and 7th in the Delicious. top 100 NSW rankings). The standout feature of the restaurant is that everything is cooked to order using fire (smoking, charring, roasting, on coals etc). Their website bluntly claims: “We kill shellfish to order and work with live fish from our fish tanks.” As a result, the menu is said to change each day, although between May and October 2019, 5/10 courses on the chef’s menu remained the same.

Head chef Lennox Hastie is famed in the media for his rustic, fresh and fiery approach. I’ve interviewed Hastie before for an article I wrote about cooking with fire, so if you’re interested in hearing from him, give it a read here.

The first four dishes were snacks. Plus two pre-snacks: a fresh-but-fatty, mini, green capsicum wrapped in guanciale and my second favourite item of the evening, a cracker with a thin slice of Swordfish belly, layered over a corn puree, with finger lime.

The first of four lighter courses is a potato winter broth. We’re presented with a piece of black garlic to mash with a pestle. This is pure theatre to get the diner involved in their meal, rather than enhancing the meal in any way. The broth is poured on top by the waitress. The broth’s good but dirty , and nothing special.

I was majorly disappointed when the words smoked burrata turned out to mean a spoon with only a mouthful of un-runny cheese on it. This was one of my favourite-sounding dishes. It didn’t have the creaminess of burrata, and could have been any old soft cheese.

Snippets of kangaroo, alternating with squares of onion, arrived skewed together at the table – and were swiftly de-skewered in order to ‘taco’ them. It’s always a pleasure to try kangaroo, because of how unusual it is. The flesh was tougher than kangaroo you’ll get at Attica or Orana, but the add-ons made it really enjoyable. Unlike the broth, the DIY element enhanced my enjoyment of the dish, choosing my own balance of skewer, sauce and lettuce.

Like the burrata, I was very excited to see sea urchin (‘uni kulcha‘) on the menu. ‘Kulcha’, Firedoor tells me, is a “mildly leavened yoghurt flatbread from Northern India”. The bread is baked over ironbark embers, and topped with slow-roasted Queensland blue pumpkin from Moonacres Farm. It’s extremely unusual to serve uni on a rather dense flatbread, which, for me, along with the roasted chilli shreds, overtook the creamy joy of this essence-of-the-ocean delicacy. I also prefer creamy, daunting texture of uni to be matched with something crunchy.

Nevertheless, I can’t help but appreciate the admirable attitude of the produce sourcing here – a marine conservationist (Craig Shepherd) hand-dived for these urchins, and the post-brood honey on top is from Tim Malfroy in the Blue Mountains. I notice Quay also boasts its use of ‘post-brood’ honey, which Firedoor explains contains the highest amounts of fermented pollen and propolis (= “outstandingly rich and complex flavour”).

I’ve never liked mackerel, so this blue mackerel dish wasn’t a favourite, although the fingerlime and wasabi combination was thoroughly appreciated.

We paid an extra $32 per person (in addition to the $150) to try the marron, which is always a must-order for me. This iteration was overcooked, but I give it full points for the chutney-like grapefruit that filled the head of the killed-in-house creature. The ice plant acted as a garnish.

Twice-charred Caraflex cabbage is served over an exceptional mussel and wine must sauce. This cabbage is more tasty and interesting than any of the protein dishes served so far, and I wish I had the recipe for that hat-deserving sauce. Apparently I’d have to grill mussels over orange wood; grind some wine pomace; and toast and grind sesame seeds and ume plum to even begin to replicate this dish. I would never have thought to use wine pomace, which is the pulp, skin, seeds (etc) that are otherwise wasted after pressing grapes. And I much prefer non-alcoholic sauces. Lennox Hastie does what you’d struggle to do at home – it’s his feel for fire and fidelity to fine, enviro-friendly farming in all its forms that make this restaurant special. I wonder if cabbage credit is due more to the producers, Living Earth Farm, than the cooks. Firedoor concedes this cabbage has a natural sweetness which intensifies when it’s roasted slowly.

The bread was dense, soft, and, disappointingly, not warm enough to melt the butter. That’s not to say I didn’t have three servings of it. Being a glutton for gluten, I became obsessed with how delightful it was to squish the sprouted rye into the butter, adding extra crunch to each bite. I’d never eaten sprouted rye before (which I will describe as wheat popcorn).

Murray Cod was nothing special for me, until I hit the cos and the pil-pil. The latter is a northern Spanish sauce with garlic, chilli, cod bones infused in Cudgegong Valley arbequina olive oil (giving the sauce its gelatinous, thick, buttery quality). As with the previous charred-cabbage course, the charred cos was the highlight innovation on the plate. As with the previous fish course, the protein was moist but basic. The story this cod repeated to me was: “I haven’t been tampered with. I’m natural and ‘properly’ sourced. My flavours are simple and subtle.”

Wagyu with radish and tomatillo (a Mexican, dense tomato-like fruit), as expected, melts in the mouth. The meat is so beautifully caramelised. The tomatillos are charred into a chutney, combined with yuzu koshu and nasturtium. This meat gives Firedoor the Factor-X quality that makes it deserve its rankings.

Koshihikari rice cream, rhubarb granita and ginger was a light and naturally sweet dessert that would have disagreed with fructose-free freaks or anti-custard complainants. I was pro.

I am the wrong person to serve a wood-fired rum baba for dessert. I am very open-minded, but rum baba is one of the foods I can count on one hand that I dislike. I always try it, because I want someone to change my mind. The best one I’ve had is from Osteria Francescana, because it hardly had any rum/alcohol flavour. A ‘poor man’s orange‘ cream redeemed this baba to some extent.

I always expect at least one (outdated in name, as most restaurants only serve one) petit four to end any tasting menu, and Firedoor didn’t disappoint. In fact, homemade marshmallows are one of the best things you can give me as a petit four, because they’re simultaneously light, substantial (protein from egg) and special, because fresh ones are just incomparable to those you buy in the supermarket. These ones had a toasted marshmallow exterior and a contrasting, cool, chocolate-ice-cream-y centre, similar to the ones served at Vue de Monde. Spice Temple‘s giant passionfruit versions are my favourite (although they’re not ‘free’).

So that was my second visit to round off my already-satisfied curiosity after trying the most famous, signature item on the menu on my first visit – the dry aged beef. But now I notice it’s not on the current menu at all! If we’re talking beef ribs, this had the reputation of being Sydney’s showstopper. I thought it was much better than the bone-boggling, carnivore’s-heaven beef served at Rockpool. No one in Sydney does beef like this, except Sixpenny. I paid $167 for this cut – almost a dollar for each of the 168 days over which it had been aged. This vision was better than the single piece delivered on the chef’s menu above, and I hope they bring it back.

Firedoor’s price point ( ≥ $150) has to deliver something spectacular to make me want to come back before there’s been any significant changes (e.g a menu or structural change). It ranks highly enough that it’s an essential restaurant to tick off the list, and form your own opinion of. I think a lot of the kudos given to this restaurant is due to it being ‘different’ rather than ‘better’.

Hastie isn’t too hasty with the pace of the courses. And he hasn’t charred everything, so that you don’t get fed up with fire too quickly. I commend him for the risky and unruly nature of his flair for flames.

Pro tip: sit at the bar which surrounds the kitchen, order a la carte, and Hastie might serve you himself!