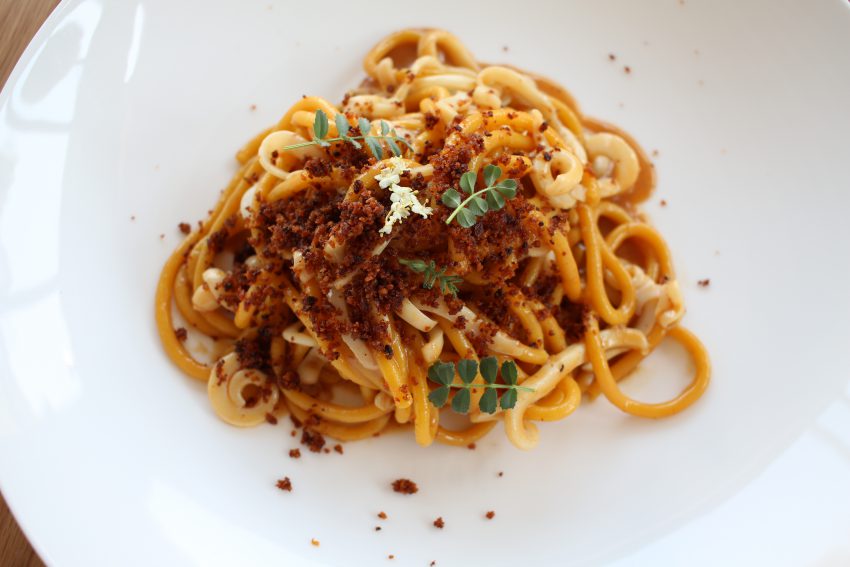 Sardinian food on the beach.

HIGHLIGHTS Culurzones (Sardinian ravioli)
VALUE 8/10
AMBIANCE Surfers’ Italy
SERVICE Slow but friendly
WOULD I GO BACK? For a healthy(ish) celebration

Sitting on the unusually comfortable armless armchairs at the front of this L-shaped restaurant makes you realise Freshwater is an underrated Sydney beach. The water is Fijian blue, and on a windless day it would be just as pleasant to dine on one of the three outdoor tables.

I’ve already written a review about my first visit to Pilu, when I ate in the narrower, fly-filled, carpark-facing side of the restaurant to try the degustation. I preferred the complimentary ‘extras’ included this time, compared to those served on my last visit, because the bread came with smooth ricotta, and a coconut and chocolate truffle ended the meal.

Like last time, my partner remarked that the food at Pilu is subtle, and not too rich. You can taste the influence of the Mosman mothers seated across from us in the clean-and-green flavours of the dishes. Butter, oil and fat are largely absent.

Prices are now $130 for five courses, and $165 for eight. We maximised value by going for three courses for $98, plus we shared a dessert. Well, we shared everything.

You can’t go wrong with a buratta beginning. I was tempted to be more adventurous, but visions of bursting cheese plump with creamy shreds of mozzarella was too desirable. Sophistication was added by the sweet, marinated baby cubes of tomato, playing on the classic cheese-tomato-bazil combination. Varying textures (fried basil leaf, basil oil, and crostini) made friends with naked, zesty orange segments. Simple enough that the burrata was still the hero, and standing out from standard burrata dishes due to its generous centre and a small knot.

Familiarity was quickly displaced by curiosity, ‘Catalan’ style, with a Magnosa alla Catalana (Moreton Bay bug dish). It was a somewhat regrettable pick. There was a $10 supplement (adding $10 to the $98) to have this as one of the three courses, but I attributed that to the cost of the bug. Sadly, the bug was lost in a sort of mayonnaise-ish salad. It might as well have been a prawn salad, as the flavour of the bug was lost and its texture was soggy. I chose it because Moreton Bay bug usually has firm, juicy flesh that resembles marron. A watermelon consommé was poured on top, which added liquid to an already unbalanced dish. Inadequate crunch was provided by the kelp topping.

As anticipated, the highlight was the culurzones, described as a Sardinian ravioli of Juncu (blue) cheese with blueberries, walnuts and duck jus. The jus was wiped clean from the plate, and although the pasta was very al dente (almost like raw dough), I loved the rich blue cheese filling.

I also enjoyed the saffron spaghettoni, mainly because of the generous use of calamari ringlets and a spicy, blow-you-nose-inducing ‘nduja sauce. That capsicum-pork sauce was a highlight, but I thought the pasta was almost like a hokkien noodle – too thick and dense.

Although categorised on the menu as a pasta, fregola risottata is more like pearl cous cous. It was bound by a thin, green sauce dotted with asparagus and taleggio cheese. It’s as light and summery as risotto could possibly be.

The waiter warned us that the Spencer Gulf Hiramasa Kingfish would be pink on the inside, because it’s cooked over charcoal, and if overcooked it would be “ruined”. I love raw kingfish, but Dad needed some convincing, also pointing out that it’s a white fish, not pink. Textures of fennel, radicchio and bottarga were subtle additions. Excellence in seafood is Pilu’s answer to a seaside lunch, and it has won a gold medal in the Delicious produce awards for its bottarga, which I’d hoped would have a bigger role to play in this dish.

We paid an extra $15 to have a dessert to share added on top of our three courses. A sweet gianduja (a chocolate spread, not unlike Nutella) and almond mousse, mirto (liqueur), juniper and Domori chocolate ice cream came in the form of a mousse log with an almond biscuit base. It had a jelly-like juniper centre that sweetened the deal.

I wasn’t ‘wow-ed’ by this experience, but I’d set my expectations high. With a fairly new à la carte menu, a second visit had become overdue. For a two-hatted restaurant, service was languid and time-poor. They definitely need more staff. I’m not in a hurry to go back, except for the culurzones and the view!