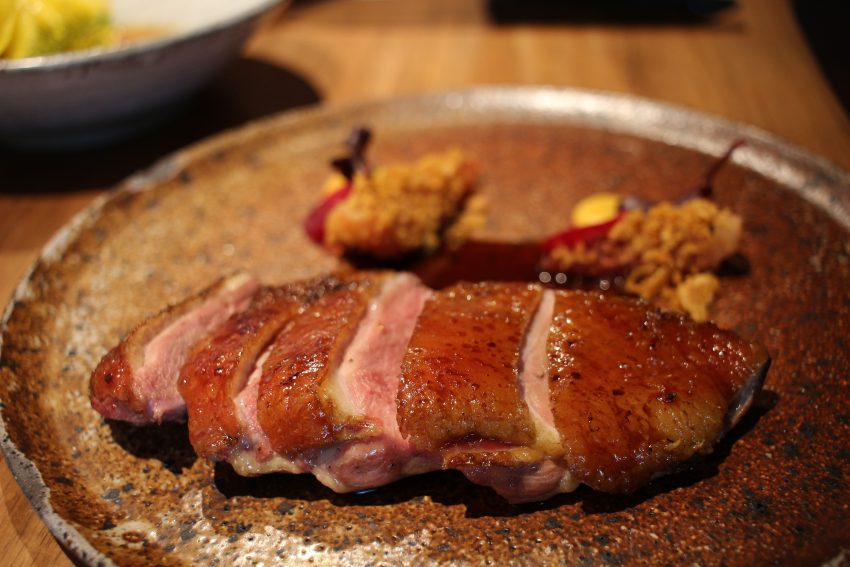 MUST ORDER Spanner crab
VALUE 8.5/10
AMBIANCE A leather-lined log cabin
SERVICE Hard to understand, but popping over to pour water like lightning
WOULD I GO BACK? I’d try (and exhaust) Scott Pickett options elsewhere first

For me, Vue de Monde is the pinnacle of Australian dining. The maître d’ there once said to me his favourite place to eat in Melbourne was Estelle by Scott Pickett. Estelle, as it was, has closed forever, but Pickett has been experimenting with other, new restaurants. Currently, his only two-hatted restaurant is Matilda159, so I decided that would be a necessary port of call on my next trip down to Melbourne.

Sadly, Matilda159 is not all it’s shaped-up to be. But to compensate, the space is excellent, and the venue makes for a beautiful winter’s long lunch. Our table (uniquely, though) was nice and wide, and there was a large, brown leather bench to sit at. This is well-lit, comfortable dining.

Wood-fired food is always exciting, because you expect that caramelised char on all of your food (which is particularly transformative of vegetables). Disappointingly, there was no octopus on the menu on the day we visited (wood-fired octopus is also delicious).

Sardine on toast ($6) sounded better than it was, with roasted garlic on potato focaccia. Despite the label, the bread was nothing like focaccia (more like toast). The sardine dominated, whereas it could have benefited from a creamy element, and more heavily-toasted bread (for warmth and crunch).

On the other hand, whipped John Dory roe and finger lime was worth $6 a bite. It reminded me a bit of the whipped bottarga at 10 William Street in Sydney.

Frustratingly, these two snacks, along with the spanner crab ($34) were brought out all at the same time. None of them were hot enough – which was meaningful when it came to the flat bread (which you wanted the butter to melt on) and when ‘fire’ is the heating method entrenched in the restaurant’s philosophy. Other than the flat bread, the second condiment (with the crab) was a prawn butter, in which the ‘prawn’ flavour was undetectable, but the butter was creamy and soft.

Not to be missed was the surprising side of Brussel sprouts ($12). Lardo and macadamia cream made for creative flavour boosters. The other side dish we ordered was cauliflower with smoked stracciatella ($12) because it sounded like a wood-fired version of cauliflower cheese. We should have known that a fine-diner would be overly restrained and avoid such homestyle comfort. There were only one or two spoonfuls of stracciatella (see pictures below), and then a watery white sauce at the bottom of the bowl. There were no traces of fire to flavour the cauliflower (compare with Ester’s cauliflower!)

Macedon Ranges duck for two ($98) was famed in the media, so that was our main course. We each got five large, blushing slices of duck breast. There was a separate bowl of broth surrounding confit duck leg and a blanket of golden beetroot. This dish was a glimpse of serious skill and an interesting pairing, with preserved pear.

Dessert was an absolute highlight, where you began to notice the use of fire. Although the vanilla flavour was weak, the smoked ice cream put the fire into the apple tart tartin ($22).

The strangest red thread to this entire meal was that nothing strongly tasted as though it had been cooked by fire and coals – compare this to Firedoor in Sydney, where the cooking method is a real feature.

It was very difficult to understand the woman who was front-of-house, and sometimes we weren’t sure if she was speaking English. We were only one of two tables in the whole restaurant on this cold Saturday lunchtime. The pace was very strange; we waited half an hour before any food; suddenly 3 of our now-cold orders arrived together; another half an hour until main and sides; and then, finally, only ten-minute wait til dessert.

I am determined to give Pickett another go, so I’ll visit his restaurant called Estelle on my next visit.