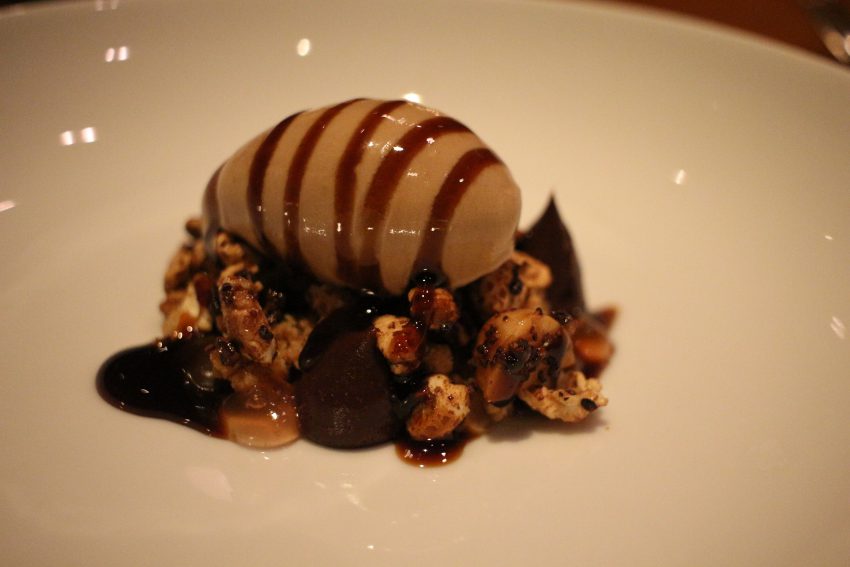 Dinner by Heston has a new history-based menu, but maybe it should bring back the past.

MUST ORDER Well, you have no real choice now (but the meat fruit and snacks are the highlight); seedlip drinks and triple-cooked chips at the bar
VALUE 8/10
AMBIANCE Fire-breathing den of secrets and flashes of delight
SERVICE Perfection
WOULD I GO BACK? Not unless they bring back the red meat; yes, for the bar

Dinner by Heston has recently taken a turn, I would say, for the worse (although it is still an excellent restaurant).

In the middle of 2019, they evidently decided to bring themselves into the modern age of the fancy-but-forced degustation, while insisting on remaining in the past. By this I mean, the menu is historically oriented, celebrating culinary discoveries and innovations of old. Where once Dinner by Heston offered us an à la carte menu (see my previous review of Dinner by Heston), they now present only one dinner for the diner: one degustation (see the new menu here).

This change deserves close critique because of the random price jump. We move to a compulsory $295 menu, before we even get tea and coffee. This price is the main reason I would not come back in a hurry (I would only do this to eat the meat fruit and the snacks again). Apparently there will be seasonal changes to the menu (truffle: case in point). Hopefully reflective of global warming, we’ll be seeing extreme improvements.

The atmosphere, partly appropriated from Crown Casino, is still there. Fireballs whoosh upwards like a live artwork from the Casino’s riverside concourse below, and the Yarra’s reflection is calming. One of the best features of Dinner by Heston is the comfort of the setting. There’s plenty of room between the tables, you can have a private conversation, it’s quiet (blissfully music-less), you can be a silhouette, and your table is wide enough to accomodate your arm span. The chairs are a rare triumph (hardly anyone gets the chairs right).

‘Savouries’ come out as three separate snack courses, and they are all brilliant. A bone marrow tart with anchovies and panko crumbs announces a crunchy, creamy beginning (if only this level of flavour continued!) A creamed oyster slips freshly down with cucumber cubes and dill. And now – a hint at the creativity we’d come here for – a shiitake broth over prawn tartare.

The hay smoked kingfish did not stray far from the ordinary, ticking all the classic flavour pairings with what tasted like sashimi (the smokiness was very subtle) accompanied by a pickled lemon ‘salad’, gentleman’s relish (got a kick to it!), sorrel and smoked caviar.

Rice and flesh, on the other hand, is justifiably transferred over from the previous à la carte menu. It’s like a risotto with crunchy chicken skin on top, bound by an almond cream, saffron, lamb sweetbreads and smoked olive oil.

I will have to take a pause to mourn for the bread…I miss the old bread! This new bread is thin, not hot at all, and much more dense, without a good crust…super disappointing (see my old review for pictures of how great the bread used to be here!) Luckily, the soft, rolled butter remains.

The biggest relief was seeing that they’ve kept the meat fruit on the new menu. It wasn’t as aerated, nor as large, as the previous version. But I am still grateful that the combination of spiced red wine, chicken liver parfait and grilled bread haven’t been tampered with.

Since it’s truffle season, I decided to take the vegetarian supplement to the meat fruit, a truffle parfait (while sampling my partner’s plum). It displayed a unique skill that Heston should boast more about in his dishes – his ability to transform cream into something beyond its own magic. A silkiness is produced in a way that I’ve never experienced before.

So far, we had been impressed. This joy abruptly ended with the main courses, the significance of which exacerbated our disappointment. There are three alternative mains to choose from on the degustation menu: fish, duck and chicken. I chose the spiced duck, which paled in comparison to what they’re doing at Vue de Monde or Igni. The next day, I also had better duck at Matilda159. This one was, for starters, not very generous. It was tougher than usual, not hot enough, and didn’t have a super crunchy skin. I could not finish (THIS ALMOST NEVER HAPPENS TO ME) one of the duck accompaniments, which was a watery bowl of boiled vegetables and internal organs, although the cracker on top was nice (because it was 80% pistachio). This side bowl is inexplicable and didn’t complement the duck in any way (self-acknowledged by the kitchen, by being contained in a side bowl!?). I liked the Jerusalem artichokes, ale and malt on the same plate as the duck, but they were nothing to write home about either.

The chicken and cauliflower was more palatable, but no more interesting. It was cold. It was very, very pink. I could not detect any flavour from the smoked cauliflower puree. The brown butter was likewise MIA. The saving grace was the parmesan and truffle ‘macrows’ (a fancy, less tasty version of macaroni and cheese) served in a separate pot. Mysteriously, this also seemed to have no flavour correlation to the chicken.

We seemed to be getting back on track with the sambocade, essentially a light cheesecake, with a midlayer of tuffle and honey. The smoked walnuts on top really made it delightful.

The Lamington Cake is a newbie, and a beauty. As usual, Heston kills it in the presentation department. The coconut cake looks soft and fluffy, with a restrained (not too sweet) starring of raspberry and lemon myrtle, and chocolate cream.

The famous ice cream with Vegemite dessert was a must-try on this trip for me, as I had the tipsy cake last time. The Vegemite ice cream takes centre stage over puffed rice, a barley chocolate ganache and verjuice curd, with malt caramel drizzled on top by our waiter; but according to SBS, there’s a “biscuit sourdough-crumble base with puffed spelt, cocoa nibs, burnt honey and macadamia nuts”. I think a Masterchef judge would say the Vegemite flavour is too restrained. I can barely detect it (it could be renamed as a salty, chocolate dessert). It’s mostly just the salty aspect of Vegemite that’s been captured. This was excellent, but not Peter-Gilmore-level excellent.

Another relief was that they’ve kept up the tradition of bringing around the ice cream cart, with the entertainment of watching liquid nitrogen freeze your scoop, and the power of selecting your own two toppings (see videos in my Instagram highlights).

Petit fours were all very creative, but missable. Perhaps they were to ‘out-there’ as a way to end the meal. A cherry and marscapone tart, a beetroot jelly and a tiny prism of chocolate caramel.

The dominant word to describe this experience is strange. With so much talent and creativity, I know I can set my expectations high for a Heston meal. I like Heston’s unusual selection of ingredients, and the historical justifications he offers (you have to be prepared to spend 1-3 minutes before each course listening to the waiter recite a history of each dish). But demanding so much of the diner’s ear needs to be justified by complementary (even if new/unusual) flavours. I don’t mind bad-rich. I mind bad-mild.

You absolutely MUST visit the bar, order the triple-cooked fries, and a non-alcoholic cocktail. They’ve got some seedlip drinks (and others) that will knock your socks off.

It’s just such a shame that this menu didn’t even offer a red-meat main. This is Heston’s forté! I still dream about that bone-marrow-topped Angus I had last time. I’d fly down from Sydney just to eat that again.