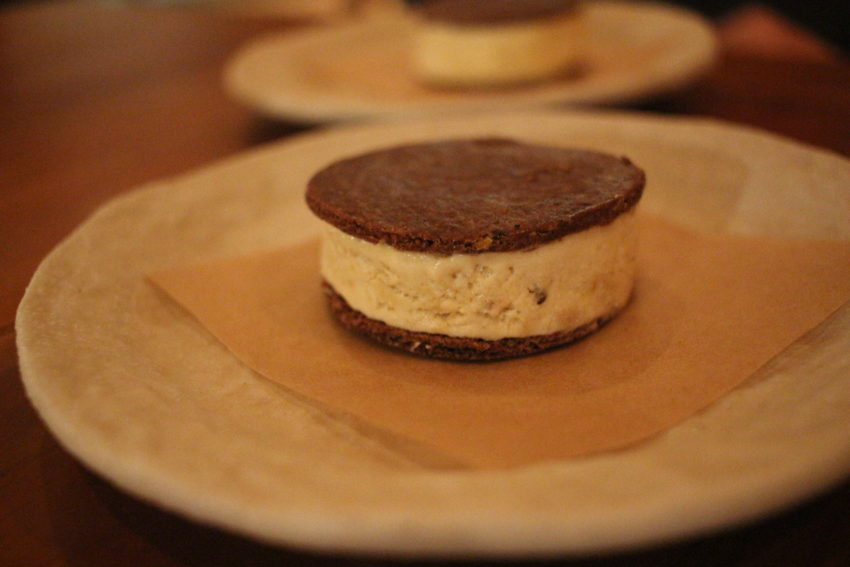 Biota’s food is clearly farm-inspired, as head chef and owner James Viles, of the Viles Group, serves Bowral on a plate. Sydney favourites present themselves for duty–like cheese from Pecora Dairy and trendy Japanese inspired combinations (evident in the roe tart; the chawanmushi transformation of mud crab and egg; shrimp in broth; kohlrabi; fushimi pepper and nashi pear).

The décor enhanced the dining experience, playing to its countryside appeal–with branches attached to the walls, a hand-felted bowl for the bread, and plates the texture of a forest floor, impressed with the ‘biota’ seal underneath.

The two ‘current snax’ were superb. The first was a nashi pear with jam and guanciale. Guanciale, like cultured butter and lardo, is a trending ingredient that gets me excited. The smoky strip of fat went so well with the crunchy pear, although the (intentional) under-ripeness of the pear meant it would have been better balanced if they’d cut the pear segment in half. Too much underripe fruit is sour and flour-y. The creamy, roe-topped tart had loads of flavour, and made for an excellent savoury start.

It was a shame that we weren’t instructed how to eat the Pecora curds and kohlrabi, because at first it seemed as though each folded disc of kohlrabi encased its own portion of the curds. However, the curds only came all in one lump at the end. Pro tip: slice through the kohlrabi vertically to get some cheese with each bite. The pond of warm bacon oil at the bottom of the dish was balanced so well with fresh zest. Yes, I said bacon oil.

A clever new take on a chawanmushi came in the form of creamed eggs and mudcrab with fushimi pepper. The eggs were the definition of ‘perfectly cooked’ (an illegal food writer’s phrase). Basically soft scrambled eggs, served hot, with the benefit of sweet crab flesh and sage.

I’d already fallen in love with Biota when I tried their kangaroo jaffle at the Carriageworks night markets in 2018. Their kangaroo bolognese jaffle was on the same level of deliciousness, with salt and herbs on top, and plenty of cheese inside. In no way should this filling be described as bolognese. Soft, large chunks of meat were distributed unevenly within their bread case, between gaps and cheese. Shockingly, there was BONE is my partner’s jaffle (pictured below). Still delicious, though.

Scarlet shrimp in a game-bird broth was a new combination for me, with the poop still inside the just-cooked, soft shrimps. Charred greens were suspended in a clean (not rich) broth. Simple.

Muntries felt at home on top of a barbecue steak with smoked yoghurt, the best part of which was the caramelised jus on top. This was superbly side-dished by pine mushrooms topped with thyme.

A banana and burnt treacle ice cream sandwich was delicious. The ice cream was far from technically perfect (icy) but it was ‘not too sweet’ that it made for a very satisfying dessert. The treacle biscuit was thin and bendy (because it was sticky), rather than buttery or crumbly, and the banana was omnipresent.

The amusingly described ‘sashimi style’ quince (code for: thinly sliced fruit) made for a fresh, fanned-out, circular bed supporting frozen vanilla milk ice cream, and a drizzle of quince syrup. Like the game-bird broth, the syrup was poured onto the dessert in front of us at the table. These basic tricks are too try-hard for Biota, who are better than this (it seems to juxtapose their country-chic style. Especially since the waitress had to laugh and apologise for the newly purchased broth vesicles, which had no spout and meant the broth dribbled everywhere. She did very well, and handled the awkward pour with finesse and humour.) Two different but successive ice-cream-based desserts was strange, and the second ice cream was just as icy (but good) as the first.

The food at Biota was simple and trend-aware, but should stick more to its roots. The staff were all extremely young, friendly and professional, which meant the courses were strung together casually and with a frank humility that did not paint the fine-dining picture they were going for. It was better this way. Biota should be proud of itself (it should lose the glimpses of modern French fanciness, and take on the full force of its own rustic character). No more broth-pouring or misleading dish descriptions, and amp-up bush tucker and hearty flavours. More focus needs to be on simple things, like a non-icy, smooth ice cream; warm and fresh-from-the-oven bread; balanced flavours (e.g less of the pear in the first snack and evenly filling the toastie); buy a jug with a spout; check the ‘bolognese’ for bones…

I was disappointed to have to pay an extra $6 for two slices of ‘live seed sourdough’, which wasn’t even warm. That was an expensive meal, even in Sydney language, and bread should be a given thing. The cultured butter it came with, sprinkled with large salt crystals and a bacon crumb, was not a sufficient justification. There was also a hair baked into the bread, but luckily we weren’t phased by that.

This is probably the healthiest degustation I’ve ever eaten, with the least sugar. None of the food was mind-blowing enough to be something I’m going to crave and dream about later (probably because it wasn’t rich enough for a glutton like myself), but still worth the drive down from Sydney if you stay the night. I want to do a cooking and eating experience on the Viles’ farm.