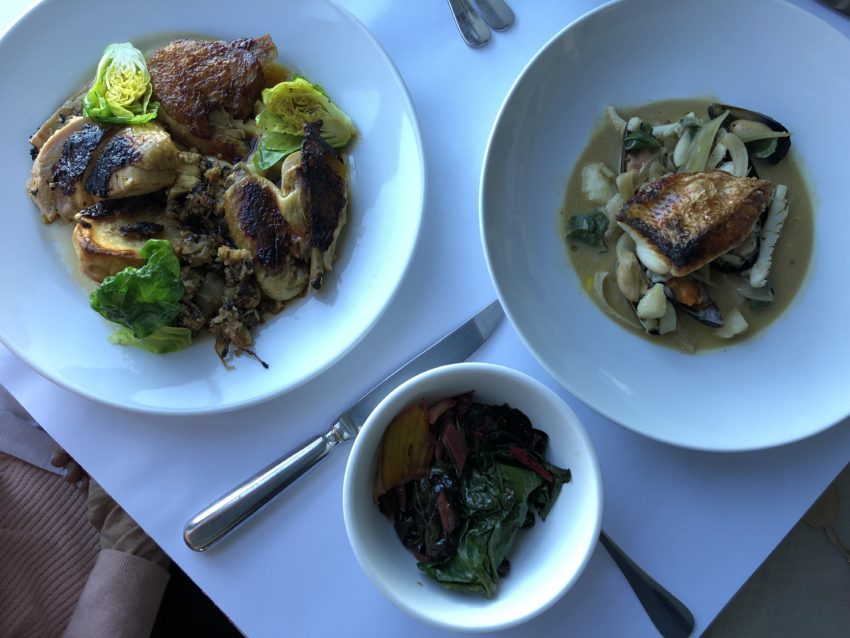 Farm-to-table in a personal, Bondi way.

MENU HIGHLIGHTS Custard tart; pipis
VALUE 7/10
AMBIANCE Squeezed between farm plates
SERVICE Ok
WOULD I GO BACK? Not for a while

My boyfriend is convinced that Sean’s Panaroma is so-called because it combines the words ‘pan’ and ‘aroma’ (cooking!). He rang up the restaurant to confirm that this is in fact the origin of the name. Sean is its owner. There’s an angled view of Bondi to be seen from window tables, but it’s not a panorama (so there’s no typo or pun going on there).

This is one of those restaurants where my first and second visits were contrasting.

Sean’s menu is hand-written in chalk on a wall, which is rather irritating. The venue is curved and some tables have little-to-no visibility of that wall (let alone the issue of legibility of the writing). We had a table of twelve people and the waitress had to explain everything separately to parts of us–and I cannot fail to mention that three of the menu items were no longer on offer!!!(“Ignore the board, we’ve run out” or “It’s not quite what’s written up there”) Isn’t the point of having a chalk menu that it can easily be rubbed out and rewritten?

Although Sean’s is not the only restaurant to adopt this practice in Bondi, I also don’t like how they have a weekend surcharge for $5 per person, when the mains aren’t huge and are $45 per person.

My first visit entailed a delicious but $45-each lunches: saddletail snapper, mussels, calamari, braised with fennel with a to-die-for sauce; and holmbrae chicken, roasted turnip and brussels sprouts, dubbed by my sister to be “the best roast chicken I’ve ever eaten”. I was keen to return for a visit on my birthday.

On my birthday a few months later, starters were all listed on the left hand side of the blackboard segments. Although I found the minuscule vegetables collected on a farm plate to be grossly overpriced at $28, all of us agreed that it was a fresh way to start. I was a big fan of both the oily sauce in which sat pipis steamed with fennel ($33) and the barley and skin of the quail in a salad of black barley, grapes, seared raddichio ($29).

Just like Sean pride’s himself with using ingredients from his farm (e.g the ‘farm plate’), he also puts his mum on the plate. It strikes me as clever to describe a dish on the menu as: Murray cod ‘mum’s style’ ($45). I’m sure mum would have patented her name is she knew she could’ve been charged $45 a head. After all the freshness of the previous dishes, this crumbed cod seemed out of place, particularly upon a generous bed of mashed potato, and no other significant elements. Is this a fish schnitzel?

Unlike the chicken we had at lunch, this free-range chicken, roasted with tarragon, leek puree, and artichokes ($45) was not nearly as interesting, and was bright pink on the drumsticks. Being so undercooked, I was rather unimpressed.

The worst dish by far, which was unfortunately the most-ordered among our group, was the farm panaroma lamb bollito, leg, sausage, turnips and borlotti ($45). The lamb was super dry (especially the sausage), boring and fairly tasteless (the only flavour coming from a few spoonfuls of wayward jus).

The only main worth its value was the $33 rocket tagliatelle with peppers, Vannella buffalo mozzarella and Pecora Ends cheese. The cheese made the whole dish and sung on its own, whereas the tagliatelle was overcooked and a mere vesicle.

Somehow, all three protein-ed mains were the same price. Here to save the day, however, is the highly anticipated custard tart with rhubarb ($19). It had a nutmeg brûlée-style crust and no pastry (just a square prism of gelatinous custard). I loved it. But it was “nothing we couldn’t make at home”, as my neighbour commented to me. To be fair, we’re both decent cooks, and good at making custard.

If I removed my concern about the extremely overpriced nature of the restaurant, there’s still an issue with the service. We found it very hard to get the waitstaff’s attention, and they didn’t speak loudly enough when explaining the menu, which is essential when that was the only way of finding out what was actually on the menu.

I’d come back for dessert or perhaps for lunch, when I have the benefit of better light and a view of the water. Not otherwise.