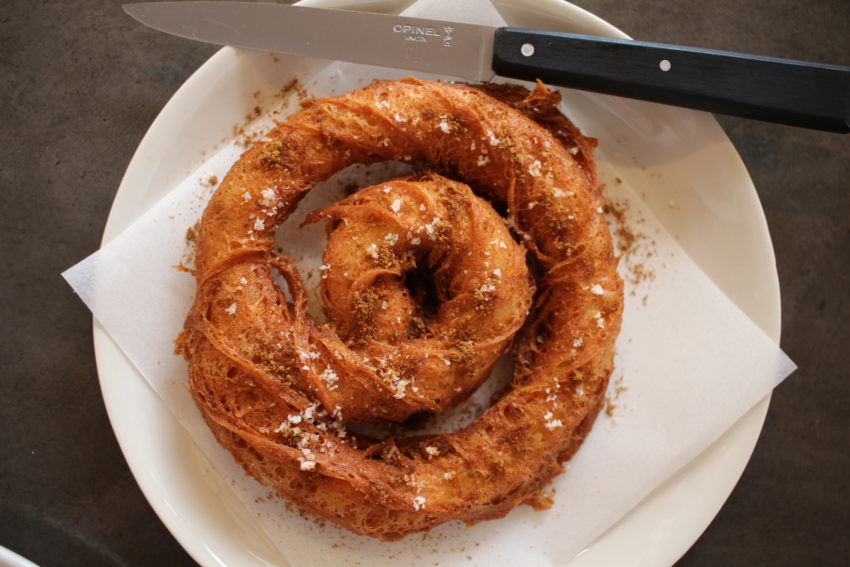 Smoke and mirrors (or some sort of magic).

Poly is not a restaurant you’re likely to discover without the aid of social media, but you will be glad you did. Opposite Chin Chin near Central Station (Surry Hills), you’ll find a dimly-lit, well-spaced gaggle of tables sandwiched between a bar and an open kitchen.

I’ve sufficiently sampled the menu to be able to say that the standard is consistently high, and underrated. Poly is the younger sister restaurant of Ester, Mat Lindsay’s two-hatted restaurant in nearby Chippendale. I think Poly is just as good (the only reason I might say Ester is better is because of two dishes: fermented potato bread, and pasta with caramelised yoghurt). The style of cooking at both restaurants is very similar e.g potato dashi broth, and smoked and wood-fired dairy dishes.

Like Ester, when it first opened, Poly served a complimentary snack (buckwheat popcorn). I was disappointed that, like Ester, they didn’t serve it on my second visit. I think having some sort of complimentary snack or petit four is an unmissable characteristic of a good restaurant, as a show of generosity and unexpected creativity.

Presentation is simple. Individual ingredients are visible. Any tricks with flavour are played with a sauce, dip, oil, jus, broth or condiment, but we aren’t talking ‘one thousand ingredients and liquid nitrogen’. As usual, these days, it’s all about seasonal ingredients.

The open kitchen confesses organisation and calm communication. The head chef Isabelle Caulfield claps her hands once per minute, as she waits for service to collect finished dishes on the pass. She never shouts, and doesn’t even use words (a clenched jaw appears after three claps).

Sourdough rolls with whipped sesame ($4 each) are fabulously fermented and had my fellows wondering “what is in that bread?!” (magic). In resemblance of Ester’s fermented potato bread, these rolls come to the table warm, sour with age, and with a delicious butter alternative. The whipped sesame could be mistaken for a cream. It’s not as interesting as Ester’s version, which has the intrigue of the roe, jelly and kefir. But at $4, these rolls are not purporting to be a standalone dish.

Do not go past the nduja and honeycomb toast ($6). You can share two toasts between four, if you want each person to have a taste of the dripping honeycomb in the centre. If you haven’t eaten nduja before, it’s a trendy, pureed halfway house between capsicum and chilli. Indeed, toast is a go-to order at Poly. Their anchovy toast ($12) is one of those dishes that make you go home questioning why you don’t eat anchovies more often.

Last time, the comte doughnut ($15) was a highlight–I loved cracking it like a hardened croissant, although the cheese flavour was too subtle. This time, when ordering the waikato gouda gougère version ($5 each), there was a cheesy piping in the centre, but I thought the gougère sandwich was a bit stale. Loved it nonetheless.

On both visits, I ordered the ricotta gnudi with pumpkin and smoked whey ($24). It’s an Italian version of a dumpling, filled with soft, freshly made cheese. The smoked whey sauce is like a béchamel. The first version was served with shiitake mushrooms, sailing between gnocchi (pillowy) and ravioli (filled tightly).

Enoki ($24) is like a divine, pasta-less carbonara. It’s got bits of pork, well-peppered and white-sauced.

The beef tartare ($24) was covered in a giant disk of hardened melted cheese. There was not enough egg yolk flavour.

Bone marrow with mustard and toast ($22), married conveniently to a contrastingly fresh salsa verde. It would have been better without the overpowering mustard, and, as usual, there was too much toast for the amount of marrow.

If you need some token greens, there is only one salad-like option. And it comes with cheese and anchovies (vegans beware). Cos, radicchio, anchovies and buffalo curd ($16) is delicious, don’t get me wrong, but the leaves are unmanageably large for the sake of screaming “I came from a real garden!”

Whole Greenback flounder with burnt curry leaf butter ($40) fell softly apart, and it was easy to serve without bones.

I appreciated the foresight of the restaurant giving us good knives, not just for the red meat course. A sharp knife is useful for all sorts of unnatural levels of sharing and dividing. Pastrami brisket with alliums ($40) was slow-cooked to the right level of fatty, soaking in a drinkable jus.

One of my favourite dishes was the smoked milk ice cream with whipped honey ($15), which seemed to be seamlessly topped with uncooked meringue. The texture of the ice cream was smooth and slightly aerated, without being too sweet.

Poly is the sort of place where you remember multiple dishes days or weeks later. Restaurants tend to remove their most popular dishes after a while, to prove their creativity and their capability (critics often get bored with unchanging menus). But Poly should have the confidence to let their best plates stick around.