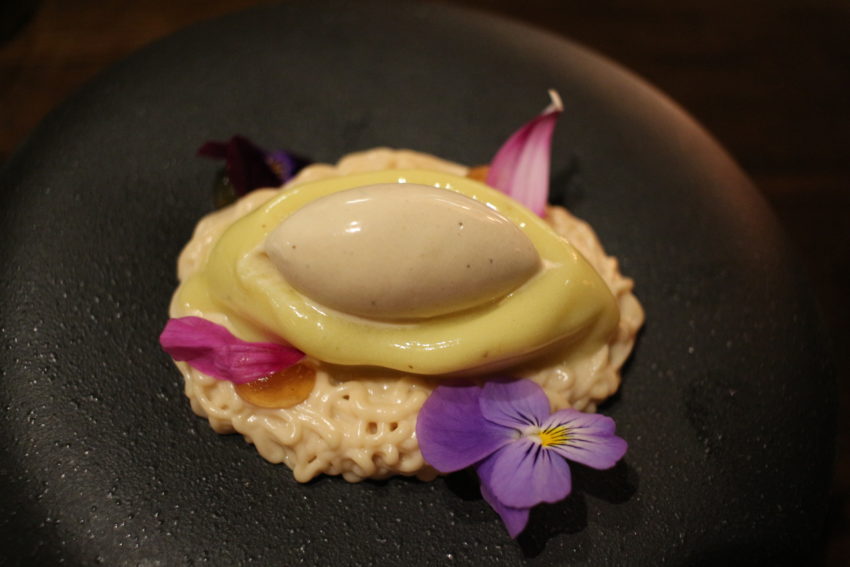 Detailed and thoughtful creativity in modern and miniature, degustation style.

I’ll satisfy your curiosity immediately and let you know that Nel. is named after the head chef, Nelly Robinson. The menu changes every ten weeks, and I went on the second day of a new menu with a Disney theme (called ‘once upon a time’). I hope Disney doesn’t sue, and Nel. has lawyers.

Eight courses for $118 per person is serious value, and the standard was fairly high. They should have a hat.

They were a bit understaffed. Having visited on the second night of their new menu launch, I’m supposing their co-ordination and memorisation of the menu was still undergoing a learning process. The bar woman frequently had to supplement service to get the dishes out.

You can easily have a good conversation, as there isn’t any loud music. But the music that is playing is wonderful. We loved the Disney soundtrack.

A few serious mistakes included not presenting us with a menu that had a price on it (since there was no dish choice) and the complete absence of an explanation for the alcohol options listed on the menu (we assumed the italicised items were going to be served to us, but they turned out to be part of the drinks pairing menu).

I loved walking downstairs from the street into Nel’s underground, dark, low-rooved den. It probably seats about 30 people, and everyone has a view of the kitchen and the pass, so it’s nice and heated (a great winter restaurant). The courses were well-paced (although the pressure on the waitresses was palpable).

‘A spoonful of sugar’ was an extremely unusual way to start. Like Quay, the first bite of the meal is raw fish. There was a cube of tuna soaked in Asian alcohol, wheat caviar (tonburi), and a shot of caramelised pineapple juice with coconut oil and shiso ponzu gel in a test tube. Already, a lot of people would roll their eyes at this. It’s very try-hard modern. But put your prejudices aside, because ultimately, it was a bright beginning.

I really appreciated the innovative Pinocchio shape, and the warmth, of the ‘telling porky pies’ pastry, which was a truffle mushroom gougère topped with mushroom puree, and encasing Maffra cheddar and espelette pepper. I think I would have listed this as a menu highlight if it wasn’t so fleeting–they should make it slightly less thin so that there was enough of it to savour.

‘Tick tock’ was a smoked chicken and crocodile croquette (which comprised of confit chicken thigh, chives, crispy crocodile and tarragon crumb), crowned with crocodile fat mayonnaise (saved it from being too dry), gold dust and tarragon powder.

‘French Lumiere’ is a scroll with cheddar cheese and turmeric chicken. On the side was a beef fat candle (we were supposed to dip the scroll in the melted fat). The candle had been burning during the previous course, and we had no idea why it was there. I thought this was the most clever bit of theatre used throughout the dinner, because it was unexpected and unusual. Unfortunately, the melted fat tasted a lot like candle (a sort of burnt/kerosene taste), but the novelty was great.

A dish I thought was genuinely brilliant was called ‘under the sea’–it’s spanner crab, tomato bubbles, seaweed and miso hollandaise. It had the balance of crunch from a nori chip, creaminess, protein and sweetness from the crab, and fascination piqued by the bubbles.

I was glad they didn’t use too many cheap tricks, and were selective about the use of vapour (a restaurant cliché). ‘Bippity boppity boo’ was spiced pumpkin veloute (basically a puree/soup), popping pasta (raviolo) filled with sour cream, pickled pumpkin, pumpkin seed oil, garlic and parmesan croutons. It arrived inside a giant pumpkin that had been filled with smoke, and the cap was lifted up gracefully to present us with literal pumpkin bowls. We were intrigued about how they clearly reuse the pumpkin bowls with new customers (how would they clean them properly?) but luckily I’m not picky about that. This was fantastic, and had the crunch from roasted pumpkin seeds and the surprise of the submerged sour cream pasta.

‘Kiss the tramp’ would have been the least impressive savoury dish, mostly due to the fried spaghetti (it was super hard and just didn’t feel like it was meant to be eaten). It didn’t add anything to the dish except for the sake of the concept resembling Lady and the Tramp. The pork meatball was average, with a tomato sauce and basil puree, but was bolstered by an understated mozzarella foam.

The most technical excellence I noticed was in the cooking of ‘Bambi’s mum’–venison backstrap. And what a fantastic version of the classic combination of horseradish and mustard potato dumplings (basically liquid-cheese-filled gnocchi)! I could have eaten ten of those! There was also a leek and mushroom salsa, beetroot salsa, beetroot sauce and parsnip sauce. We were given a little ‘bullet case’ filled with extra ‘shotgun seasoning’ with wasabi sesame seeds, buckwheat and quinoa, the leftovers of which I devoured on its own on my fork.

By the time we got to the ‘Mad Hatter’s tea party’ I was expecting great things, and I wasn’t disappointed. What a wonderfully-executed lemon myrtle and charcoal scone, which was cold and topped with persimmon jam, clotted cream and beetroot powder. The other treat was a red velvet ice cream mascarpone sandwich, served with a cup of lukewarm Earl Grey and Rosella tea.

Nelly’s favourite character in the Lion King is apparently Rafiki, who sings “asante sana squash banana”. I love the movie, and I have to say, I really enjoyed this green apple sorbet, with saffron banana fritters, spiced banana crèmeux and tamarind caramel. Peanuts and banana is a pretty classic combination, and I loved the level of richness–I’d been waiting for a flavour punch like this.

‘Seven moods’ was a chance-based petit four. We had to pick one of seven cards held out by the waitress, so each diner would inevitably receive something different. I got dopey (piña colada ball) and my friend got sleepy, which was a malt ball.

I walked away thinking: on the one hand, this is a very underrated restaurant. On the other hand, it was certainly one level below what it is trying to be. So much thought has gone into each dish. However, not all of the flavour combinations work, and it’s hard to articulate why. The only explanation I can think of is the technical application of the idea. For instance, the gnocchi just wasn’t the most well-made, well-cooked gnocchi, but the flavour combination (the idea of it) was good. And the scroll was not made by a master baker, because it was dense and stale (unless this batch was an exception, or had been sitting out uncovered for too long). Maybe some dishes are pre-made and reheated? There wasn’t a hero to each bite (i.e there were lots of competing and subtle flavours).

Nel. is too conceptually focused, and many diners would find it too overwhelming and too diverse. However, a lot of diners would be charmed by the persistent and complex implementation of the theme entertaining. I admire the risk that’s being taken–but plenty of people wouldn’t know Disney as well as we did.

Although the waitstaff are extremely casual, their manner is professional and they are trying to be very focused. I would definitely come back if intrigued by the next menu, as the not-quite-there technical excellence was still fun, and there were several winner dishes. Nel. is definitely entitled to describe itself as “a unique dining experience”.