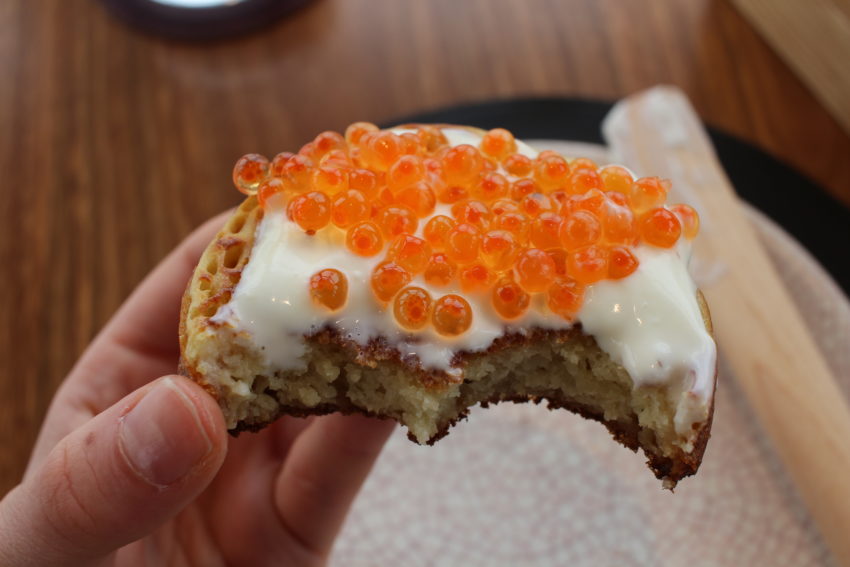 Three hats off to thee, Peter Gilmore, Master of Cream and Custard.

MENU HIGHLIGHTS Smoked pig jowl; white coral
VALUE 8/10
AMBIANCE Couples hankering for the Sydney experience
SERVICE Ideal
WOULD I GO BACK? When a new menu comes out (or for specials)

Peter Gilmore has been widely recognised as the pre-eminent chef in Australia. He’s the Executive Chef at Quay, and also Bennelong in the Opera House. Although Quay has held its three hats for over six years, it’s bowed out of the World’s 50 Best Restaurants list, where it once held a spot for five years. I’ve visited before and after, so I can see why.

Everyone is curious to know what Quay is like now that the ‘snow egg’ dessert isn’t on the menu anymore. If you don’t know what the snow egg is, you really missed out (sorry), but please refer to the final episode of MasterChef in season two, Gilmore’s own video, or Pepetual’s video to give you an idea of who Gilmore is. The egg was so popular it stayed on Quay’s menu for ten years, until the most recent refurbishment was unveiled in July 2018.

The view really is half the fun. I got the table of the house, which is the central table upstairs (the restaurant is split-levelled) that is best positioned to admire a 180-degree vista spanning the Harbour Bridge and Opera House. I’ve lived in Sydney for my whole life, and this spins a new angle on an old sight. Looking through the windows of the Overseas Passenger Terminal is like putting on the glasses of a foreigner and re-appreciating your own hood.

For $225 you can experience a six course menu, with a choice between two mains (duck or pig) and two desserts (caramel or chocolate). You also get two petit fours (salted caramel canelé and post-brood honey tart– see pics below) to finish, and one amazing snack to start (a shiitake custard and pork crackling tart). The ‘bread’ course (crumpets) was counted as one of the substantial courses rather than as a snack. Otherwise, the lack of carbs was disappointing, since a fine-dining carb is is usually a memorable one. For example, the difference between normal pasta/bread, and a chef’s finest, fresh, handmade pasta/bread…they’re chalk and cheese. People usually turn up hungry, knowing they’re about to down a two-hundred-plus dollar degustation. Bread is expected. It feels like they’re catering to a health-conscious crowd. Usually, you leave a degustation feeling unbelievably full. I felt less full at the end of this than I would after a normal meal.

I decided to responsibly keep my wits sharp and my palate clean, with a PG glass of French champagne from Reims, NV Charles Heidsieck Brut Réserve ($34).

Hand-harvested seafood with virgin soy, seaweed and aged vinegar was an extremely unusual way to start a degustation. Instead of a fresh, vegetable-based starter (or fresh bread), we had very fishy pieces of octopus, scallops and pipies. Even more novel is the method of eating this dish – with tweezers. Luckily, I am familiar with tweezers, thanks to growing up with a father who was a tick-riddled landscaper by trade. One would hope the percentage of surgeons in the room will allay complaints. Otherwise, Quay’s tweezers are gonna give unexacting people seizures, not in the least because I have discovered this signature item can be purchased for a trifling $75 from the front desk. They’re only missing a signature scalpel on your way out – you’re bleeding money at this point anyway.

Smoked eel cream with slivered young walnuts, fine milk skin and cold-pressed almond oil was silky smooth. The milk skin was dried into stegosaurus shards which matched superbly with the underripe nuts. I think it needed a tad more of the toppings to go with the cream. I was relieved to find the eel flavour wasn’t strong.

Poolish crumpets with smoked roe and cultured cream were a big disappointment for me. I’d seen them in the media a lot, and expected them to be the highlight of the savoury dishes. The ‘poolish’ technique involves adding flour more slowly to get a more aerated and less yeasty tasting crumpet. I didn’t notice, to be honest. My idea of a good crumpet is being super crusty (like toast) on the bottom, and bubbled on the top, so that you bite through the soft depth with a toasty undercrust to finish. Crumpets by Merna at Carriageworks are a good example. Quay’s crumpets were very dense, and dense on both sides. The bottom wasn’t crusty enough (but rather limp), but not light and airy at all. I suspect this batch had been overcooked or kept warm somewhere for too long. It was more like a bubbled pancake. It lacked the deep holes and warmth to melt the cream and let it seep into its pockets.

Steamed Mud Crab shiitake custard with lotus seeds, bamboo shoots and palm heart reminded me of chawanmushi, a Japanese steamed custard. I was delighted by the wakame and kombu seaweed broth (made with squid, scallops, chicken wings, dried shiitake mushrooms and green spring onions!), and thought they’d been very generous with the big fragments of Cape York crab. This is a personal favourite type of dish (chawanmushi-like), so I’m biased. I also (uncharacteristically) appreciated the aesthetic addition of linaria flowers. I think most people would find this sort of savoury dish pushes their boundaries, when they’ve already eaten the eel cream (even though I loved both, and thought this one was better than the eel). I think Peter Gilmore is turning too Japanese-y.

Smoked pig jowl with shaved abalone, Lion’s Mane mushrooms, and sea cucumber crackling is my choice of main. This is Gilmore’s most prided savoury dish, and finally – we have crackling and crunch! We have a decent portion of protein! We have mouth-melting fat! We taste our dollar signs in the abalone! We have serious flavour! This is the sort of standard of dish I’d expect to have in every single course. I felt like I’d been warming up before, and now the sorcery was beginning.

I could not resist ordering the greengage plum sorbet because of the temping inclusion of pistachio brûlée underneath. It was surprisingly light and simply delicious. I am a sucker for a vanilla custard, and no-one does it better than Gilmore.

White coral is Quay’s new pièce de résistance. It genuinely looks like coral, but it’s a network of delicate white chocolate. Crack it a few times with a spoon, and it starts to sublimate. Underneath is a coconut creamy delight that resembles the snow egg’s custard foundation. The next layer is a pineapple ice cream, followed by a white chocolate mousse (which is the same mousse that forms the frozen coral). I think it can be objectively agreed it’s not as good as the snow egg on any level, but it’s certainly breathtaking. And this is still as good as dessert gets in Sydney (granting the snow egg was ‘beyond the beyond’).

I preferred the à la carte style of the old Quay menu, which was far more impressive in its variety. The new menu doesn’t give you any reason to come back, because it stays mostly the same conceptually (supplementing seasonal ingredients). I also didn’t think it was the best that Peter Gilmore has to offer. Although he whisks up a mean custard, and turns anything made of cream into mouth-gold, I think he exploited this too much. Four out of six courses involved cream or custard elements. That’s almost cheating when you’ve got Gilmore’s skills. Overall, the experience lacked variety in texture. There also wasn’t enough meat – there was no poultry, beef, lamb, or fish. None of the dishes heroed a vegetable, either.

If Vue de Monde only has two hats, this shouldn’t have three. I also don’t think it should be rated better than Bennelong, which has a comparable Harbour view, equally super food, and a wider variety of skills on display.

One of the most impressive things about Quay was how they handled the vegetarian menu. They were even able to do it mushroom-less (for those who dislike the fungi version). They certainly cater well to a range of dietary requirements.

I wouldn’t suggest a trip here unless there’s a special reason for coming, and you’ve already been to my top five restaurants on my The. Best list.

Some images from ‘the old Quay’ I’ve been talking about can be found below.