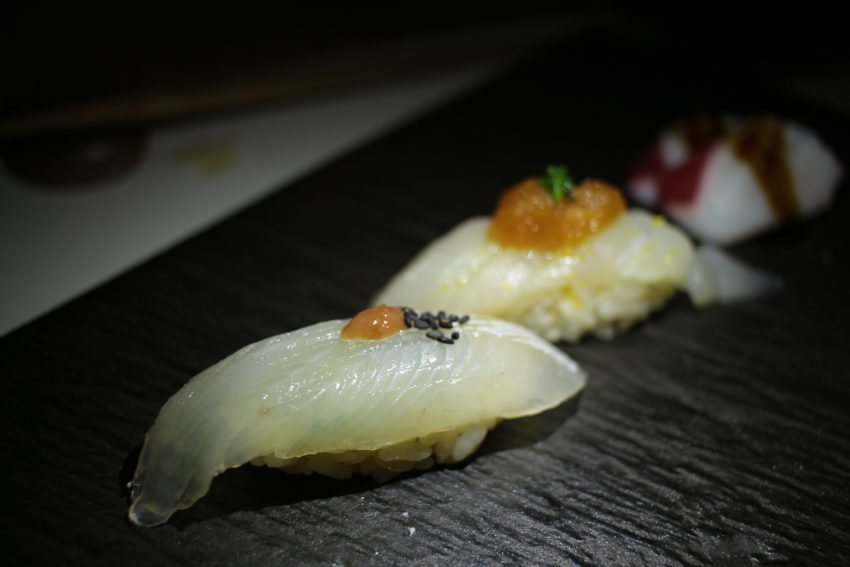 MENU HIGHLIGHTS Scampi; flounder nigiri; abalone; tea-flavoured white chocolate; soy sauce
VALUE 9.5/10
AMBIANCE Precision appreciators
SERVICE Excellent
WOULD I GO BACK? As Australia’s only three-hatted Japanese restaurant (where it’s easier to get a booking than at Sokyo omakase), I dang well would

Minamishima is, in theory, Australia’s best Japanese restaurant. When I visited, the base omakase price was $175 per person, but now it’s $185 per person. There is no other menu. However, we paid extra to get all three specials. Two of those were among my favourites of the night, so I’d insist that you branch out.

The whole menu is outstanding, and fairly consistent. Nothing was boring. Every ingredient is premium. In particular, familiar basics, like wasabi and soy sauce, won’t taste the same next time you go to a run-of-the-mill sushi train. Real, grated wasabi root is not ‘hot’, because the wasabi we’re used to has horseradish added to it.

Tsubugai with golden flying fish roe begins what turns out to be a series of never-before-experienced events. Sweet, crunchy, fresh elements are layered atop a sea snail, along with a banging brown and nori seaweed sauce. Tonight, I also try puffer fish, stingray, wagashi (plant-based dessert), flounder and gourd for the first time. The puffer fish (special #1) was clearly the most confronting dish, possibly because it was life-threatening. I trusted the three-hatted chef Koichi Minamishima with my life. For people wondering what puffer fish tastes like, it resembles a somewhat tasteless, paper-thin version of kingfish. The best part was the accompaniments (lemongrass sauce, peanuts), including the collagen (jelly). Overall, it was expensive and dangerous enough to be something you could easily live without. What made it interesting was the texture, not the taste.

Scampi (special #2) tastes as good as Moreton Bay bug; it’s warm; transparent; over a base of kelp and small, coloured, crunchy rice-cracker spheres.

Karasumi chawanmushi is one of my favourite Japanese dishes – it’s steamed egg (what Aussies know to be savoury custard).

Cured black cod with seasonal vegetables was warm, sweet, tender, and not too salty, while segments of the fillet still held together.

The waitress brought out what she called an “efficient morsel” of modestly fatty charcoal-grilled wagyu topped with crispy mushrooms and a mysterious foam.

Sakura (cherry blossom) tea and strawberry sorbet was also simple, but so tiny that it worked well as a palate cleanser. It’s not icy at all – and somehow creamy without containing any cream.

Next came three sets of nigiri. King George whiting, hapuka and octopus were a great start. The second set is the one I will remember forever. Ever since I shovelled that row of cold sweet prawn, pillowy, warm scallop and seared flounder fin methodically into my mouth, I have searched for flounder on every nigiri menu. This flounder was so fatty and buttery – similar to bone marrow. No one has ever done it as well (Sushi Dai in Tokyo came the closest, but raw flounder wasn’t as delicious as this seared version).

But wait. The most life-changing tuna I’d ever consumed (until I ate the nigiri at Sushi Dai half a year later) –Blue Fin tuna, seared Blue Fin tuna belly, dried gourd (fruit) strip.

An abalone interlude was so welcome. And a stand-out.

Whilst crab and bamboo rice was an unsurprising, sweet hit, the stingray fin broth was missable (loved the broth, bored by the stingray).

The dessert items were tiny and subtle. Kuri wagashi is a warm, sweet, chestnut ball, with a light custard inside. It’s floury in the same way that an uncooked chestnut is starchy. This dessert is traditionally eaten along with tea. Minamishima served it with roasted green tea, which tastes slightly burnt (roasted leaves are not my favourite).

The omakase went out with an insane bang, that shocked me into realising that the Japanese are underrated chocolatiers. Three variations of matcha white chocolate squares could have duplicated themselves a hundred times over.

Like Sushi Dai, Den and Narisawa (three of the top restaurants I visited in Tokyo), there was no salmon on the menu. I’m starting to think that eating so much salmon is an Australian thing.

Minamishima demonstrates the sort of brilliance that doesn’t exist outside Japan. It’s not wanky, and it doesn’t need your business (you will flock to them). There’s a lot of justified pride here, and I’d suggest any nigiri-lover should give them the satisfaction.