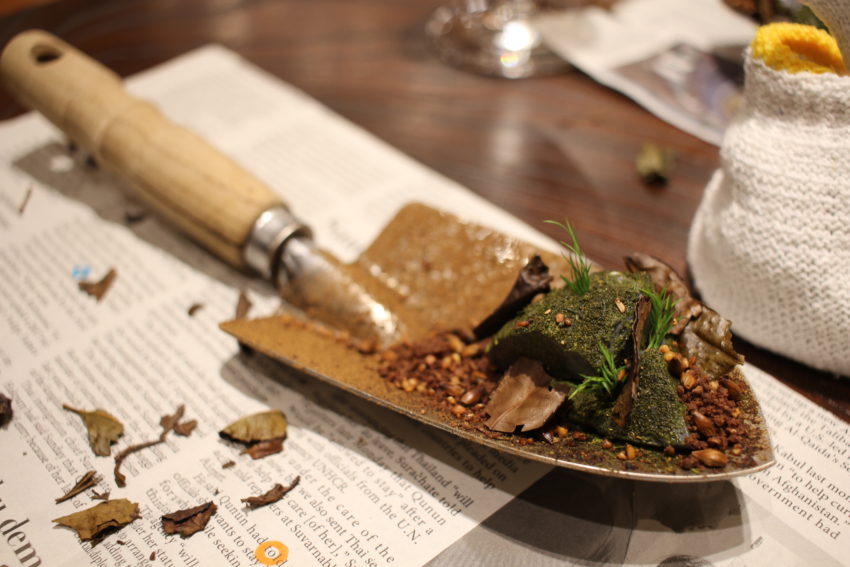 MENU HIGHLIGHTS Agedashi tofu; savoury monaka; truffle ice cream affogato
VALUE 8/10
AMBIANCE Neighbourhood couples with a playful attitude
SERVICE Ideal (and beyond)
WOULD I GO BACK? It’s unlikely I’ll have a chance, but it’s not the best in Japan anyway

Ranked as the seventeenth best restaurant in the world (and Japan’s best), my expectations of Den were set very high. I loved the décor of the restaurant, lined with a pastiche of kitschy trinkets. The head chef has a dog who says goodbye when you leave the restaurant. The kitchen is partially open, and you can always see three chefs working away (there are others in another kitchen out the back). The head chef Zaiyu Hasegawa came to greet us, and also sang my partner happy birthday. They were very friendly, professional, and spoke fluent English.

At AUD257 per person, this was slated to be a spectacular meal.

I love Japanese dining, because it always includes a warm, wet towel at the beginning of the meal. We were also offered some complimentary regional Saké.

First up was a savoury monaka, which is a Japanese wafer, usually served for dessert. Instead of sandwiching a scoop of ice cream, the warm, fresh wafer squares were filled with squashed, dried persimmon and foie gras. The foie gras was surreally smooth, and I still crave it.

Fried chicken is their signature dish. It comes in a KFC-like cardboard box, with logos and images of the head chef. The chicken itself was somewhat boring (the batter was very light) but moist. The champion was the stuffing of the drumstick, which included sweet crab meat and rice.

Makerel seems to be very popular in Japan. This one had a lovely charcoal skin, and a champion seaweed vinegar on the side.

Pork loin fell apart superbly, and I’d give it a 10/10. They love their broths at Den, and this one was mind-bowing. I’d argue the Japanese do broths better than the French.

Another signature dish is Den’s salad, with over 20 different vegetables, all cooked in different ways. It was a dry salad, but didn’t need a dressing, because there was SO much flavour from the sprinkles of dried kombi seaweed. My favourite vegetable was a tempura item – the unhealthiest part of the salad.

A starchy broth made with fermented rice and filtered sake featured cod, turnip, shiitake and carrot. The cod fell apart nicely under the pressure of chopsticks, but the milt (fish intestine) was very tough to handle. It was creamy, soft, and a bit gelatinous.

The most boring (and therefore surprising) course was a random and largely flavourless bowl of rice. Butterbur (a plant in the daisy family) floated on top of a miso soup. There was a side of turnip, Chinese cabbage, and dried fish flakes. The best part of this group of dishes was the gently fried bamboo in the rice.

Tea-ramisu was a highlight for me. It was a soil-looking dessert served on a shovel on a piece of newspaper. The ‘soil’ comprised mainly of cream cheese, coloured with charcoal, crushed tea leaves, toasted buckwheat and cacao powder.

The final dessert appeared to be a mug resembling a Starbucks frothy coffee. A milk foam went beautifully with a custardy element on the bottom. The middle of the cup was filled with truffle ice cream, melting from the dash of espresso.

Considering it’s ranking, I think Den was a bit of a disappointment. There were three outstanding dishes (as mentioned), and the rest I could forget about. Although not as good, in my opinion, as somewhere like Momofuku Seiōbo or Vue de Monde in Australia, I would definitely recommend it if you’ve got deep pockets. If you only have one restaurant in Japan to splurge on, though, I wouldn’t make it this one.