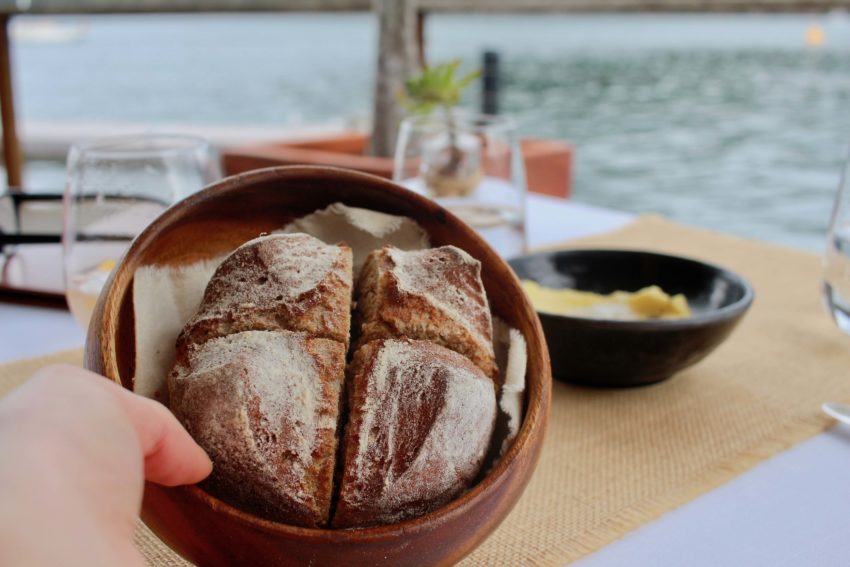 Come here for one of three reasons: to celebrate something, to be romantic, or to make some use of that pesky helicopter getting rusty in your garage. Throughout your dining experience, planes will land on the water and boats will moor and release their aliens onto the restaurant’s wharf.

You can sit inside or outside, which is a no-brainer. The chairs and tables in both areas are lounge-room-like, and yet the service isn’t wanky. The vibe is country-meets-city-meets-beach. Even on an overcast day, I’d recommend it.

Three courses will only set you back $105 (or you could get four for $125, or seven for $150). Additionally, Cottage Point Inn ticks the same boxes as every top restaurant. For all diners there was free bread, snacks and a petit four. These are signs of generosity and creativity. There was another mid-course (and crucial) surprise, discussed later.

The snacks were the right level of impressive for the sort of expectations you have of the Inn. Firstly, there’s a crunchy cone (like a wanton wrapper) filled with a generous tablespoon of salmon sashimi. Secondly, the little cucumbers were refreshing, but uninteresting. I think they were supposed to be pickled, but they seemed to be just seasoned.

The bread needs its own paragraph. Boy, did I eat it with my eyes. On the down side, it wasn’t warm and steaming. But I loved the texture, somewhere between a bread roll, brioche and a toasted loaf (fluffy, crusty, airy). Rye sourdough is like Batman teaming up with Superman.

Cured snapper with tahini, pickled onion, horseradish and saltbush was fresh and unusually lacking a citrus element. It all worked well, and the snapper was similar in flavour to kingfish, but less sweet.

Kangaroo tartare was a must-try for me when I saw it on the menu, as all tartares are. Kangaroo makes for some of the best tartare, in my experience. This was no exception. I loved the thin buckwheat crisp. The egg yolk was strangely gelatinous (rather than runny) and the wasabi cream was too grainy, but overall I had no regrets.

Quail with XO, butternut squash, mushroom and oats was superb. The quail had a slightly crispy skin, but was appropriately pink. Those mushrooms were hidden gems, and there should have been a few more. Don’t get me started on the pumpkin purée.

Charred octopus, sweet and sour radicchio, black pudding, hemp seeds was just as fresh. It wasn’t as good as the wood-fired octopus at Sotto Sopra, but on-par with Ormeggio’s. I say this because it was soft and yet well-cooked. Generally, I think cooked octopus needs a bit of char or crunch to make the suction caps palatable.

The best dish for me was the Bass Grouper with anchovy, peas, garlic and rosemary. It checked all of my texture boxes, with crunch from the crisps and from the burst of fresh peas. The sauce was absolutely unreal, with a light citrus component. That Bass Grouper was so moist and packed with flavour. This dish has since inspired me to order Bass Grouper when I see it on menus. It is yet to disappoint (although probably not doing wonders for the ocean’s ecosystem).

Swordfish was inspired–with miso caramel, barbecued cos, native herbs and salmon roe. However, it was dry and overcooked.

The meal was satisfying and delicious, with no major let-downs. It was all fresh, well-balanced, tasty and creative.

There’s a reason Cottage Point Inn has been here since the 70s (forgetting its delightfully charming past as a boathouse, general store and post office).

Parking can be difficult, but you should travel there by private car.