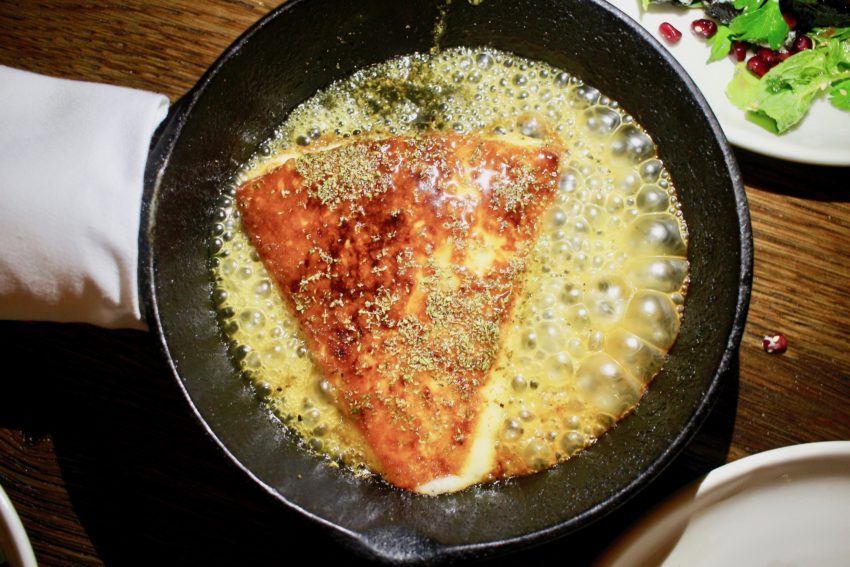 Greek without the grub.

I would recommend The Apollo to anyone who likes Greek food. The restaurant serves made-to-share, one-hatted dishes. There are plenty of great vegetarian options as well. Don’t expect the generosity of family-run, local Greek joint like the Corinthian in Marrickville or the affordability of Eat Grk in Beverly Hills. Whilst the food isn’t wildly innovative, it’s certainly Potts-Point conscious.

To start, it’s a good idea to order warm pita bread ($4 each) accompanied by the taramasalata mullet roe dip ($12). The pita is thicker and less cooked-through than you’d like, but it’s warm and hits the spot. If you’ve got any leftovers they’ll pack it up in a mini pizza (pita) box to take home.

I have two equal favourite dishes that I come back for. Firstly, the saganaki cheese ($17) is not to be missed. Saganaki refers to the pan it’s cooked in, but the dish itself can be made using a variety of cheeses such as graviera, halloumi, kephalotyri or sheep’s milk feta. I am yet to discover which type of cheese they use at The Apollo, but have since made the mistake of ordering Saganaki (e.g prawn saganaki) at other restaurants where it’s looked and tasted completely different. This version has to be the best. It comes to the table bubbling in a pan of sticky honey, encasing the fried cheese in a caramelised layer speckled with fresh oregano. It can be shared between two plump papou or four narrow nonas. Eat it quickly because, like halloumi, it hardens when it cools, and loses its appeal.

Next carb off the rank is the kritharaki pasta with braised oxtail, tomato and skordalia ($26). It’s a mouthful indeed. If you’ve ever had baked orzo pasta, this is similar. Kritharaki is pasta in the shape of rice. This dish is a hearty flavour bomb, and I think a lot of its sophistication comes from the skordalia mixed throughout—a garlicky, potato puree. There’s a solid crunchy topping that’s been baked just like the best part of the breadcrumbs atop a baked tuna mornay. Ever since I first tried this dish at Apollo, I’ve been hooked on oxtail.

The baked eggplant, pomegranate and almond salad ($18) was our side dish of choice. It’s like a Greek version of tabouleh, since the green body of the salad consists mostly of chopped herbs. I was just as tempted by the gorgeous array of healthy sides: roast cauliflower with anchovies and almonds ($13); green beans, farro and walnuts ($13) etcetera.

It would be difficult not to compare The Apollo to the other top Greek restaurant around the city, called Alpha. I found the lamb was better at Alpha than The Apollo. Apollo’s oven-baked lamb shoulder with lemon Greek yoghurt ($40 half, $85 whole) is more hard and dry. Unlike at Alpha, the loukoumades (honey doughnuts) with pomegranate, yoghurt and pistachio ($14) can be missed. The star dessert at The Apollo is the walnuts with filo pastry and coffee cream ($14), which, to my mind, is a pile of warm and flaky baklava balanced between cold, delicious cream.

The seating is extremely comfortable and accommodates both crowds and couples. The lighting isn’t too dim and the music is unobtrusive. Service is stretched, but at the end of the day, this is a good weeknight restaurant (there’re queues on weekends). The space accommodates an unusually high number of people (but there’s far less breathability than at Alpha). It’s a stand-out on Macleay Street for me.

Order next time: wild weed and cheese pie; calamari or octopus
Visit dates: three visits since 2016, once in 2019