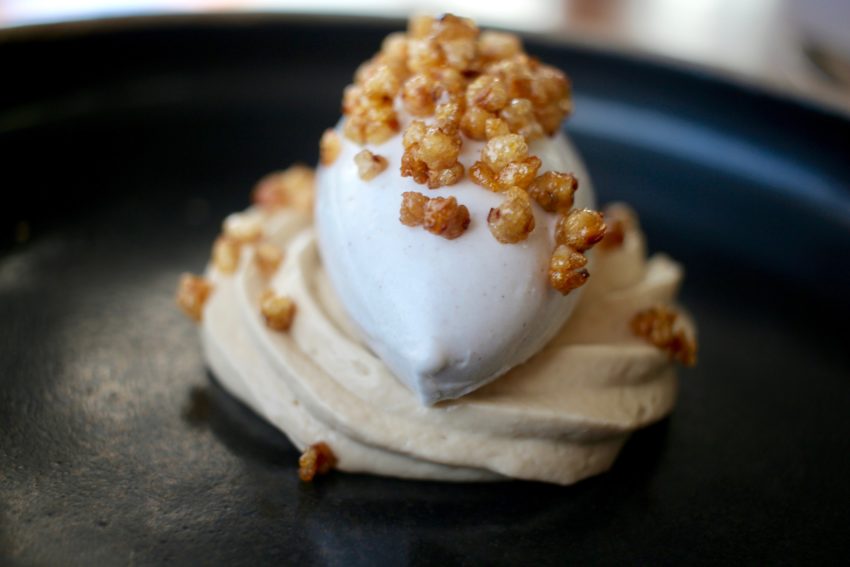 The LuMi experience is self-described as ‘casual fine dining’. After pondering the use of that phrase, I think it’s appropriately used, but not unique. Many of Sydney’s fine diners are diffusing stiffness by doing away with formalities, meeting a demand for ‘no white tablecloths’. Vibrancy, theatre and share-menus are replacing microscopic portion sizes and multiple layers of cutlery. I still like it when the waitstaff wear a simple, common uniform, though (at Bella Brutta, for example).

The open kitchen allows me to glimpse head chef Federico Zanellato nibbling at whatever he just shaved down a row of dishes along the pass. Gambero Rosso just dubbed this man the frontrunner of the best Italian restaurant in the world.

I ordered the ‘LuMi experience’ menu ($150), offering a wide range of the restaurant’s specialties. Fourteen courses sounds like too much, but the first six items are snacks.  Prices have already changed since my second visit in September 2018. These days at LuMi, it’ll cost you $155 for twelve courses, or $125 for the ‘small tasting menu’ of eight courses; or $185 for the ‘chefs menu’ with fifteen courses. Click to view.

The first snack was called an Italian gunkan. You think you don’t know what a gunkan is, until you realise you’ve seen it hundreds of times behind the display counter of a takeaway sushi shop. It’s like a palmful of sushi rice wrapped in a boat of seaweed nori and topped (usually) with caviar or tuna salad. This one combined stracciatella with sea urchin, and was sensational.

Wagyu tartare with smoked bone marrow on brioche toast could have been better. I didn’t like how the cured egg yolk was shaved on top rather than mixed into the tartare. I also couldn’t taste the marrow.

Despite the third snack being named ‘Jerusalem Artichoke’, the heros were the discs of raw mushroom. After searching for the artichoke, one realises it’s contained in a malt biscuit crisp (but I couldn’t taste it). The caramelised cream glued the mushroom layers together.

Moreton Bay Bug tart with guanciale, bug roe emulsion and yoghurt tasted as good as it sounds. Guanciale is a trendy cured meat, and I’m glad it’s in the house. I could not discern the sweetness of the bug flesh over the yelling of the yoghurt.

There was no going wrong with fresh Yellowfin Tuna encased in a sweet potato cone. Bubbles of roe pop in your mouth alongside fresh chilli and a squirt of spicy mayonnaise. This was the most well-balanced item on the menu.

Unlike my previous visit, where the bread was a highlight, this rye & spelt brioche disappointed me. This 2018 version was served with a very salty koji butter and (apparently) caramelised onion (I didn’t notice the latter). Serving bread as the final (rather than the first) ‘snack’ was a very filling and strange way to centre the degustation. Most disappointingly, it wasn’t hot and fresh, so the butter didn’t melt on it.

Blood orange with shiso leaf and shiso jelly with caramelised walnuts had potential. However, the puddle of extra virgin olive oil in which it was parked transformed a fresh and fruity salad into seven segments of slippery juice with too much sweetness added by the caramelised walnuts. I disliked the salt-on-citrus combination.

Chawanmushi with Spanner crab, yuzu dashi, dried prosciutto floss, tapioca pearls and coriander seeds is fabulous. Traditionally, chawanmushi is a Japanese custard, which is usually served with a prawn or a dash of broth. This one was covered in delightful and generous crustacean strips. I found the bowl too shallow, since the custard became shallow and thin, rather than a deep gelatinous dive for my spoon.

Agnolotti with truffle, pepitas and ponzu were soggy, oily and overcooked. There was no flavour explosion, as experienced on my first visit (the fillings have changed). 2017’s four agnolotti were one of my favourite dishes of all time. These three were watery on the inside, which happens when the pasta hasn’t been tightly pressed when it’s handmade. Precision is lacking. Although I am a truffle fan, I regretted paying $15 extra to have truffle shaved on top, and it actually detracted from the dish. (See the last few pictures below to compare my first and second dining experiences.)

Instead of going for the wagyu, I opted to switch to the oxtail gnocchi with orange, thyme and walnuts. I loved the cavolo nero in it, which is Tuscan kale. Kale infiltrating our fine diners could hardly have done more to deserve its place. The oxtail was soft and falling apart, but was flavourless and would have been boring without the truffle ordered as an add-on. The gnocchi is dry, chewy and tough, not light, smooth and pillowy—it needed a sauce. 10 William St and Bacco Osteria do better gnocchi.

Toothfish on the menu is another sign that LuMi’s on trend. This one was served with chickpea miso, and was a serious triumph. Much better than Ormeggio’s. Suddenly LuMi was serving me something truly fresh and hot. Flavour! Moisture! Technique, where have you been until now?

Dulche de leche with freeze-dried mandarin and yuzu snow was a crunchy, sophisticated marvel. It melts very quickly and disappears when it hits the tongue. The dulche is hardly sweet and nicely aerated.

Liquorice mousse and truffle ice cream is spotted with caramelised, puffed buckwheat that might be mistaken for popcorn. It’s one of the nicest desserts I’ve had in a while. The mousse is outstanding, made with xanthum gum and isomalt (unlikely I can match this texture at home, damn it). A chemical masterpiece.

The petit four is a caramelised steamed bun, pan-fried on the bottom, with chestnut cream and quince miso. This is LuMi’s version of a Mont Blanc, with weird cubes of fruit…and the bun ruins it.

After a second visit, LuMi went from being in my top five to top twenty best restaurants in Sydney. The star dishes of 2017—the bread and agnolotti—were reduced to shadows of their former selves. Glimpses of brilliance are visible behind a hit-and-miss food service. I’m withholding judgement and planning on coming back for a third visit, given the contrast in my two experiences. There’s no doubt LuMi is a leading Sydney restaurant.

LuMi Dining is located in Pyrmont, opposite Pyrmont Park near The Star.

Click on the arrows to swipe through the degustation I had.