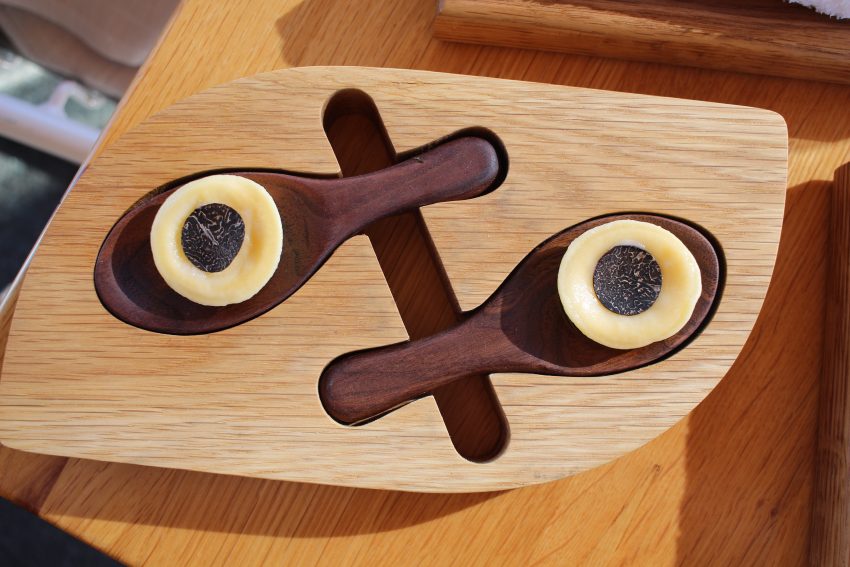 Italian at its most innovative.
MENU HIGHLIGHTS All of the snacks (particularly the Kangaroo taco, bottoni and manchego chip); truffle tagliolini; carrot cake
AMBIANCE Wharfside without the hustle
VALUE 9/10
SERVICE Ideal
WOULD I COME BACK? For a new Italian menu
Straight up, this is one of my favourite restaurants. It’s Italian, but it’s so untraditional that you find yourself wishing there were more than just a few bites of pasta in the whole degustation (they do pasta so well).
We had to ask them to pull the blinds down. I probably ordered about six glasses full of ice only, to add to my water. The champagne turned warm very quickly. Outside, Mosman’s waters were sparkling and there was a welcome breeze. The music and lighting here are ideal (except we sat at the hottest table in the restaurant).
Service is stellar. They bring you wet towels, are very respectful and polite, accomodating and friendly. These guys are very professional, and you can understand their accents (unlike at other high-end establishments, where the lack of articulation is frustrating). Their crockery and plates are luxurious, absolutely on-trend, and a pleasure to eat from.
A Trip Via Spain is the title of this year’s tasting menu. The menu is structured into: apertivo, pane, tapas (cicchetti) and petit fours. It’s lovely, but as far as I’m concerned the structure neither champions the best of Spanish nor Italian food. It’s a creation in its own right. Ten courses, plus snacks, costs $189.
Agua de valencia was ideal for such a hot day. It was like a vodka and gin granita, but not too sweet. It might have been better to have this dish after the snacks as a palate cleanser, because we were so hungry. Not a great first dish, but a great dish.
Yellowfin tuna tartare with pistachio purée and ocean trout roe was sandwiched inside a purple crisp which hit the spot. Just like the nori crackers at Saké or the crackers with tartare at Saint Peter, they’re fashionable for a reason.

Cold mussels were equally welcome. They tasted fresh from the lemon and lime dressing, the mussel cap and the cucumber.
After being at the restaurant for one hour, this was all the food we’d been given. The pacing was quite frustrating, because we hadn’t got to the bread yet and we were starving.
Kangaroo ‘tonnato’ was like a kangaroo tartare inside polenta and semolina tacos, topped with pine nuts. I could eat this every day. It was innovative, creamy and delicious.
Scamorza with a chorizo terrine is a dream come true. It’s basically two wafer-thin, round, cheese crackers encasing a chorizo dip. Not as good as the all-cheese version I had at the ‘Ormeggio v Pilu’ dinner, but still fabulous.
Porcini fritters were also a highlight. Partly because they weren’t fritters at all, but rather mini, warm logs of porcini terrine with the lightness of a tempura batter, and the taste of puffy shortcrust pastry.
Bottoni filled with truffle pecorino exploded with a delightful, milky, aged filling. A one-bite wonder.

Olive and rosemary sourdough bread is a much needed carb injection. It’s not as light as the focaccia at Jonah’s, but it’s nothing like normal sourdough. This version is more of a pita/focaccia/damper.

One of the strangest dishes was a royale of charcoaled white asparagus served on a mini log, with a separate dipping bowl of aged manchego consommé (a salty, lemon hollondaise).

Even though we were having the Trip Via Spain degustation, I really wanted to try one of the dishes on their special truffle menu – the truffle tagliolini (my favourite pasta). Thank god I did, because it was the best dish of all for me. It was creamy, full of confidently-shaved cheese and a dreamy sauce (needed more of that sauce).
Confit and charcoal glacier 51 toothfish ‘al pil-pil’ with salted cod mantecato had a cooling jalapeño sauce (sounds like tortology, but it’s true) and came with rich rye crackers. Apparently it’s Venezuelan.

Seafood carbonara left a lot of room for improvement. First of all, it needed the sea equivalent of bacon. There was no light cream or milk. Whatever the sauce was, it was far too starchy, glue-y and sticky. “It doesn’t want to be swallowed,” said my friend. It did the opposite of sliding down your throat, and we had to finish our waters to push it down. There was far too much roe, but at least we could taste punchy pinches of pepper. The tagliatelle itself was perfectly cooked and sprinkled in lemon zest. The worst part: it was cold.

Octopus two ways arrived on a makeshift robata grill, threaded through some lengthy sprigs of rosemary. It was slow-cooked and glazed, rather than being crunchy from char. Soft octopus tentacle is not my favourite.

Carnaroli risotto fitted into the same pattern: good, but nothing special that you’d expect from professional risotto makers. It was made with octopus sock, squid ink, smoked paprika and salsa verde to lend the surface three different colours: black, red and green.
I had been eyeing off the menu line that read: salad of rocket with parmesan, diced pear and Modena balsamic vinegar, because we were desperate for something cooling and fresh. This is not a salad. It’s more like a bowl of watery/icy green stuff (e.g the rocket was freeze-dried). There wasn’t much flavour, but it was incredibly interesting and beautiful to look at. Nasturtium ruins it for me, but that’s subjective (I just think the flavour is horrible). The parmigiano foam was the glorious saviour.

Pollo arrosto (roast chicken jus) with potato gnocchi and fresh thyme had my friend saying, “Did we just order KFC?” Flavourwise, it wasn’t much better than a plate of potato gems with rich gravy. It wasn’t bad, but didn’t demonstrate anything you’d come to Ormeggio for. Crispy chicken skin is nothing new, but the rosemary gel was awesome.
Charcoal wagyu with pimientos del piquillo (pickled Spanish capsicum) and fermented black garlic was the most disappointing dish. It’s hard not to love a simple hunk of wagyu. This one just didn’t have the flavour that wagyu normally possesses, nor any interesting elements to lift it up (I apologise to the pickled baby turnips). It wasn’t juicy, bloody, fatty and was overcooked. I suspect it had been resting for far too long, because it was hardly warm.

At this point we could have ordered the Ormeggio signature cheese box, but it cost $60 per serving. Instead, we were desperate for a fruit juice.
An absurdly delightful almond sorbet and date consommé poured at the table revived our lowering enthusiasm. Compressed Goulburn nectarines turned up the freshness.
The chef’s skills were displayed far more strongly in the desserts. Memories of Castagnaccio is a stunner. There’s a thin praline with rosemary and sultana gel, a honey and chestnut cremeaux with ricotta and honey gelato. The cremeaux is grainy and pastey, which must be from preparing the chestnuts incorrectly (raw chestnuts have that floury taste). What it lacks in smoothness is corrected by the lightness of the cream.
There were three petit fours. A pleasing santiago tart of almond sponge and a mixed spice shard that tasted like a piece of gingerbread paper. The final tiramisu truffle ball looks standard, but the filling is unexpected. It’s nice, but tastes nothing like tiramisu. The ‘marscapone’ inside is too thick and sweet (should be filled with piped coffee cream or something instead).
My first ever visit to Ormeggio was actually attending an ‘Ormeggio versus Pilu’ dinner given to me as a birthday present. Pavoni and Pilu (the respective Executive Chefs) are friends, so a collaboration dinner combining Italian and Sardinian food was sure to be a blast. My favourite item served was a manchego chip (a cheese cracker filled with some sort of parmesan cream). The snacks also included an ‘eggplant parmigiana’ and veal tonnato (resembling the same three snacks as above in the Trip Via Spain menu).  Absolutely outstanding.
Ormeggio also served a carnaroli risotto with parsley, angasi oysters, black garlic and majolini franciacorta brut (a sparkling wine). This was my first ever sample of roasted oysters, and admittedly I could hardly taste them underneath the champagne foam. I loved the dish as a whole. The carrot cake with fennel gelato, faro cream and vinegar caramel was likewise a huge success (despite sounding strange). It is the best savoury dessert I’ve had to date. Savoury desserts are in fashion, and this is a wonderful example of why. Every single dish at this dinner was better than the equivalent version I had on the Trip Via Spain menu.
I have been extremely critical, because it’s so obvious that Ormeggio (and the team behind him) employs many of Sydney’s best Italian chefs. It’s a shame they don’t try to display their skills and traditions more strongly. I cannot imagine what sort of lasagne they could blow my mind with if they tried. It feels like they’re trying too hard to impress with contemporary techniques. Innovation should never trump flavour. Perhaps it’s the Spanish element that I dislike (even though I love Spanish food). I hope next year’s menu has a dish that turns bolognese on its head, or serves up the best ravioli on earth. These guys could do it.
Visit dates: twice in 2018 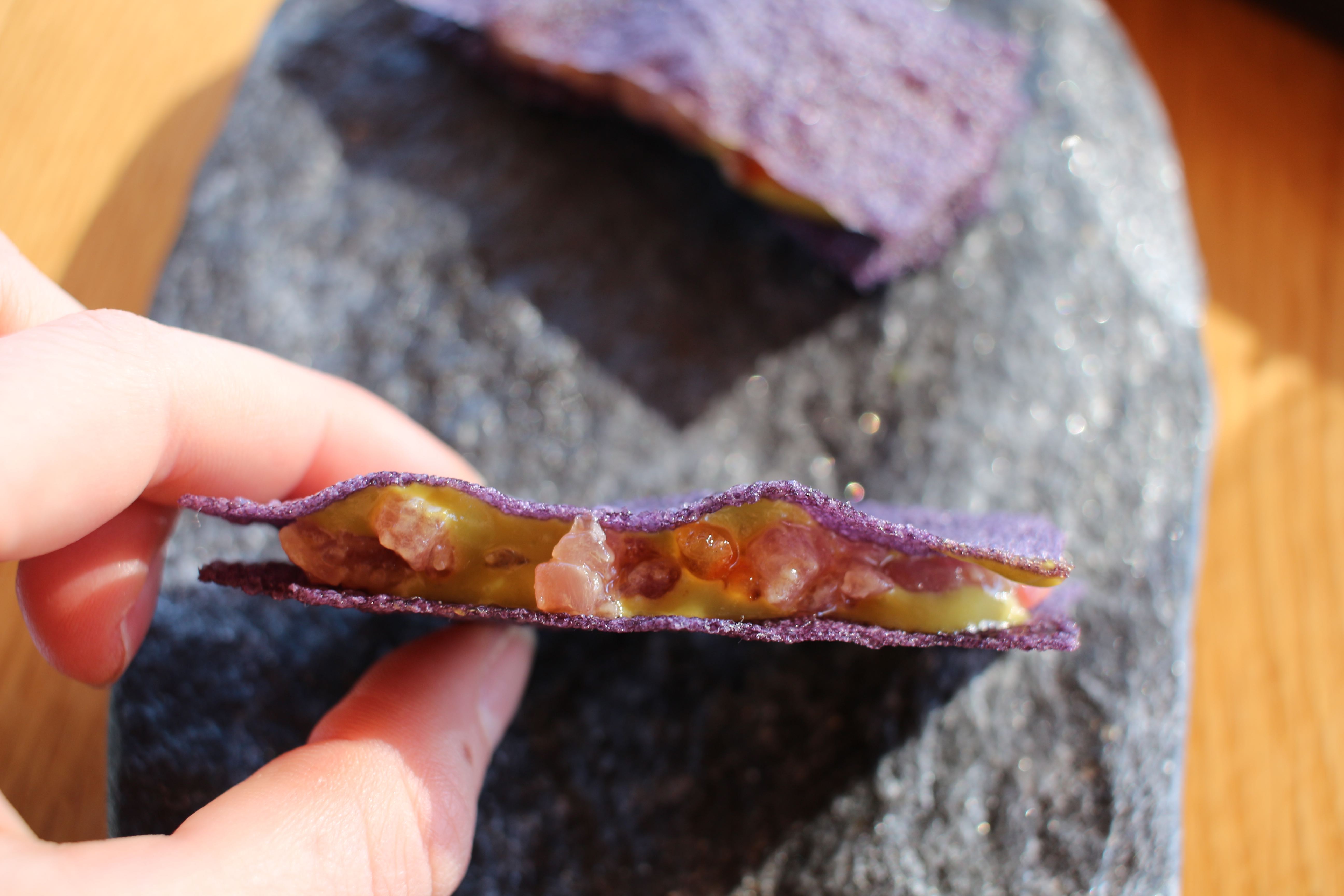 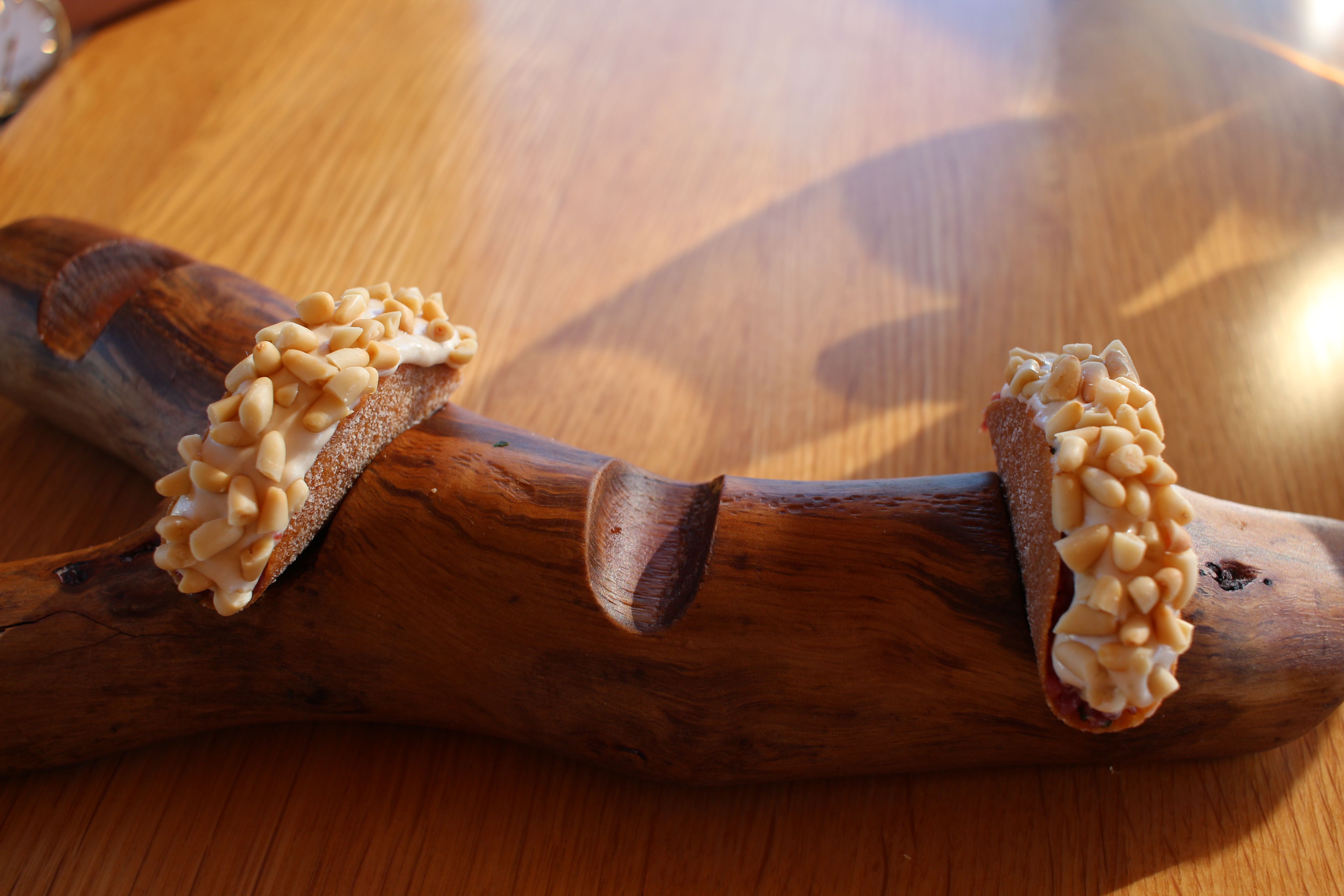 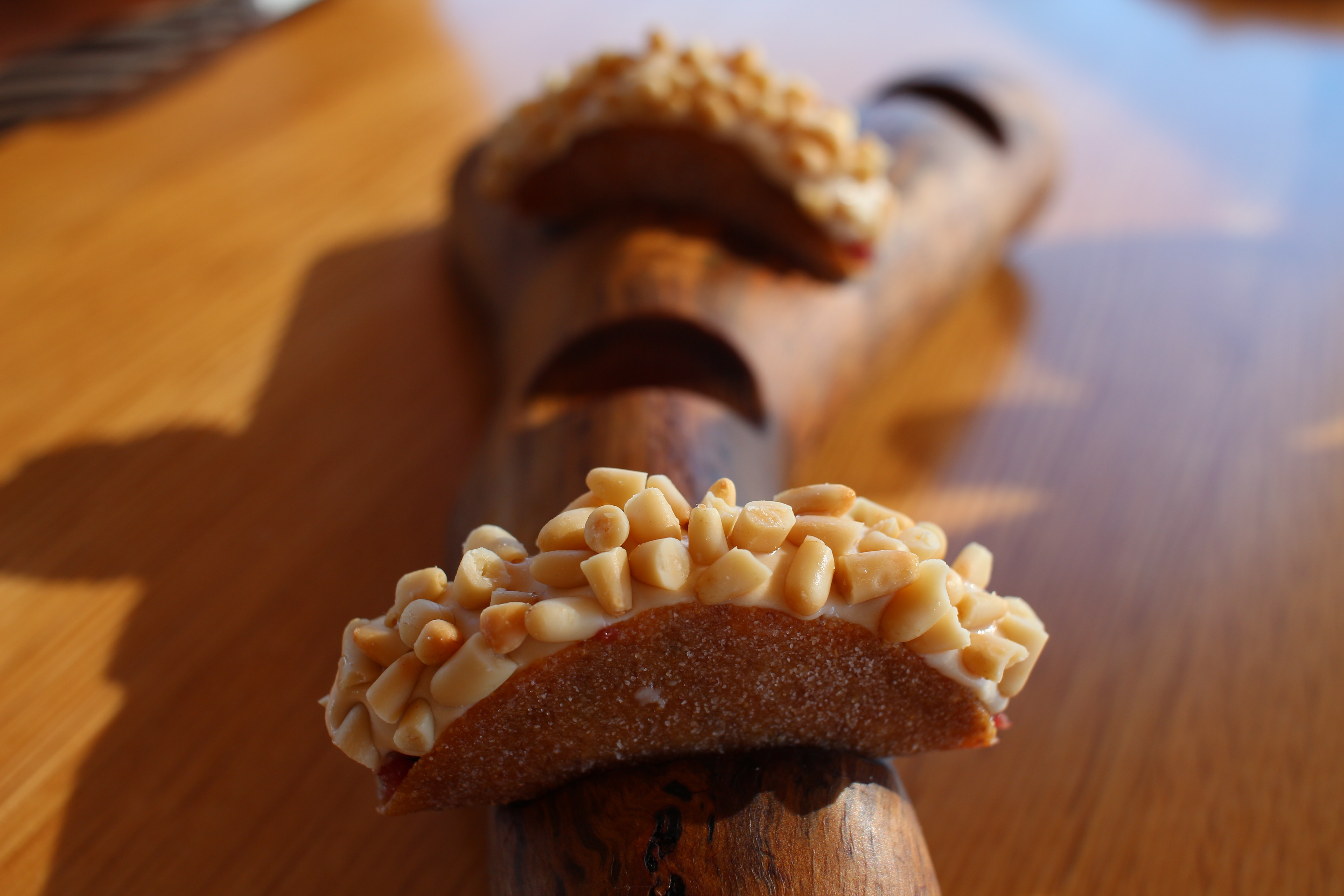 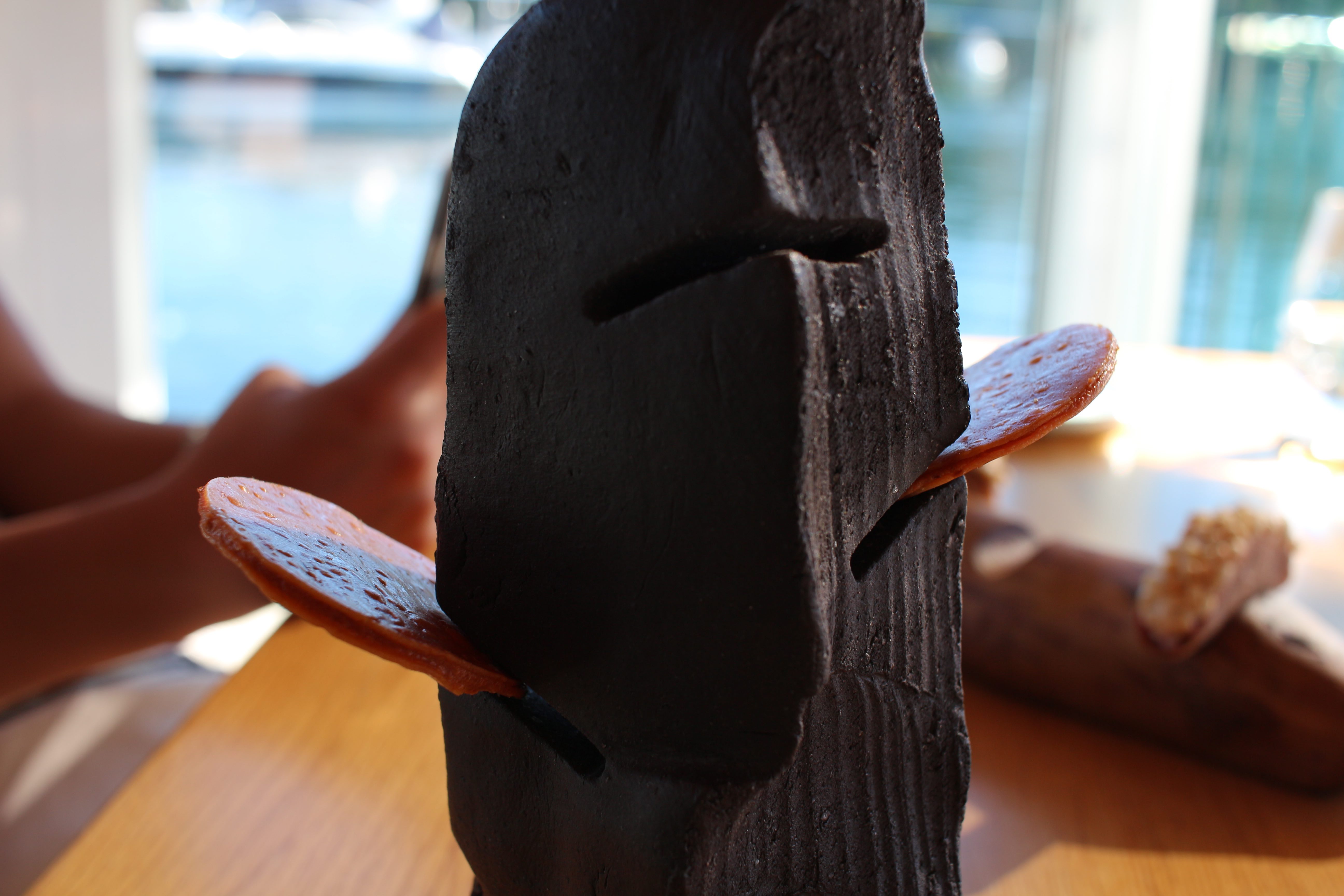 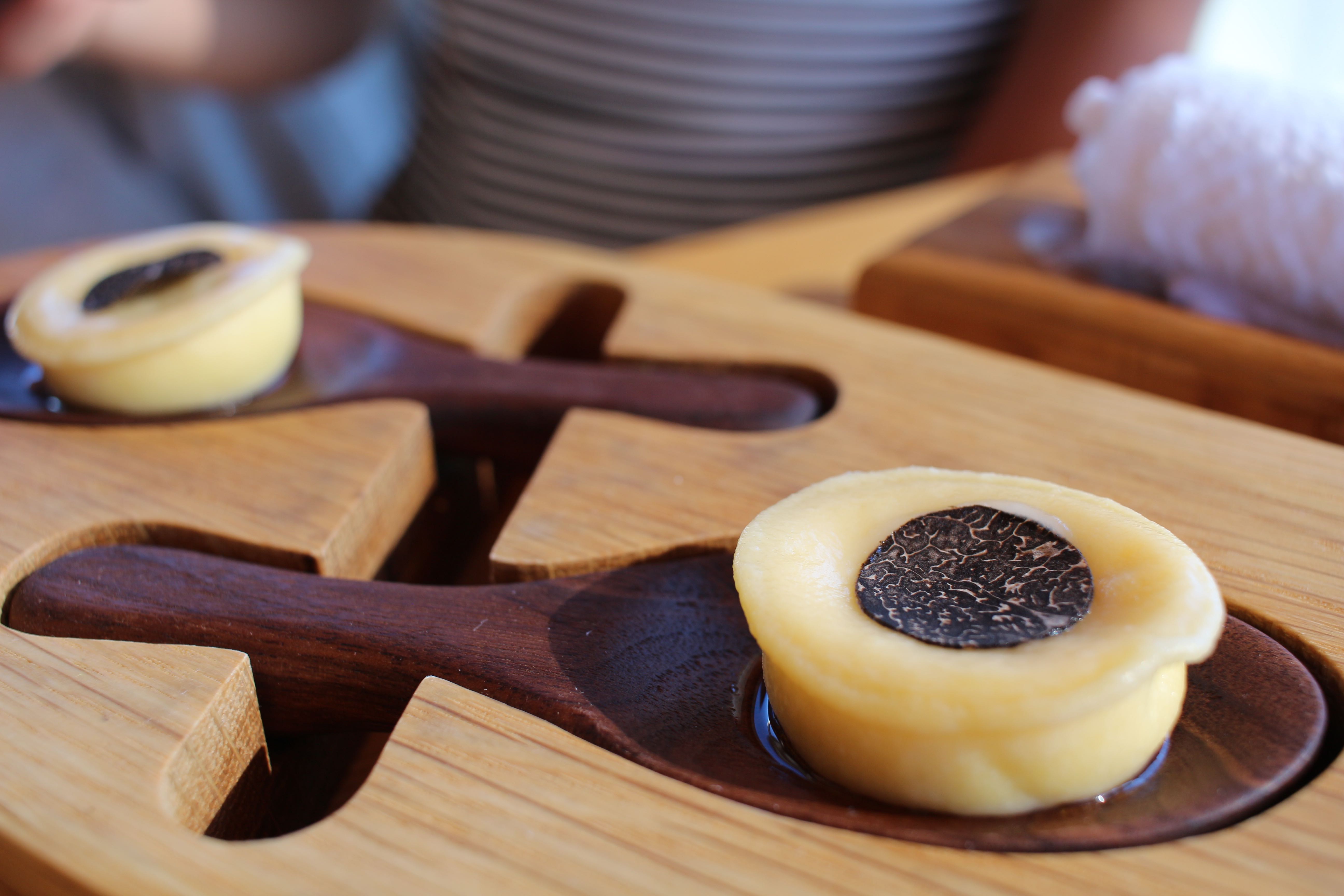 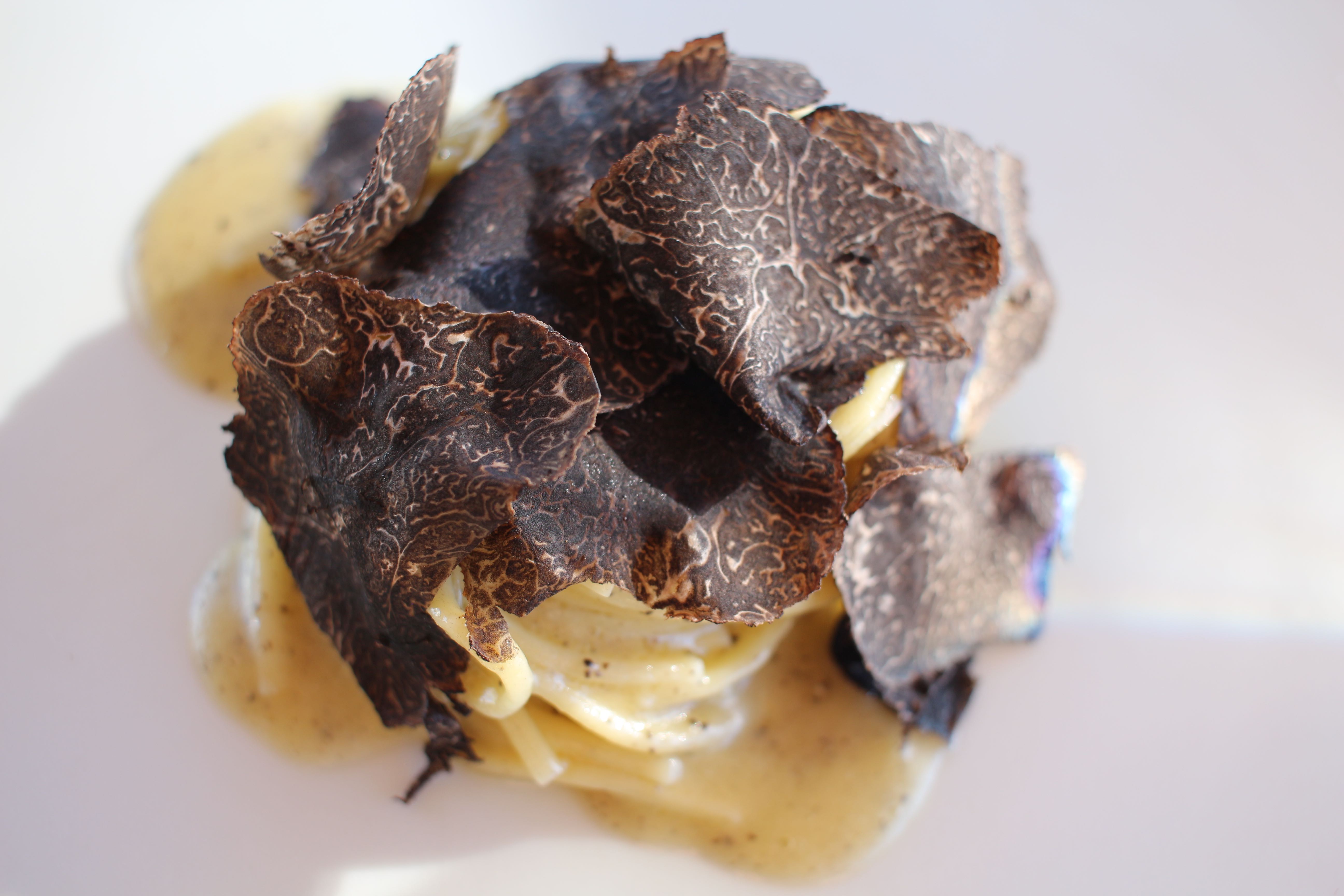 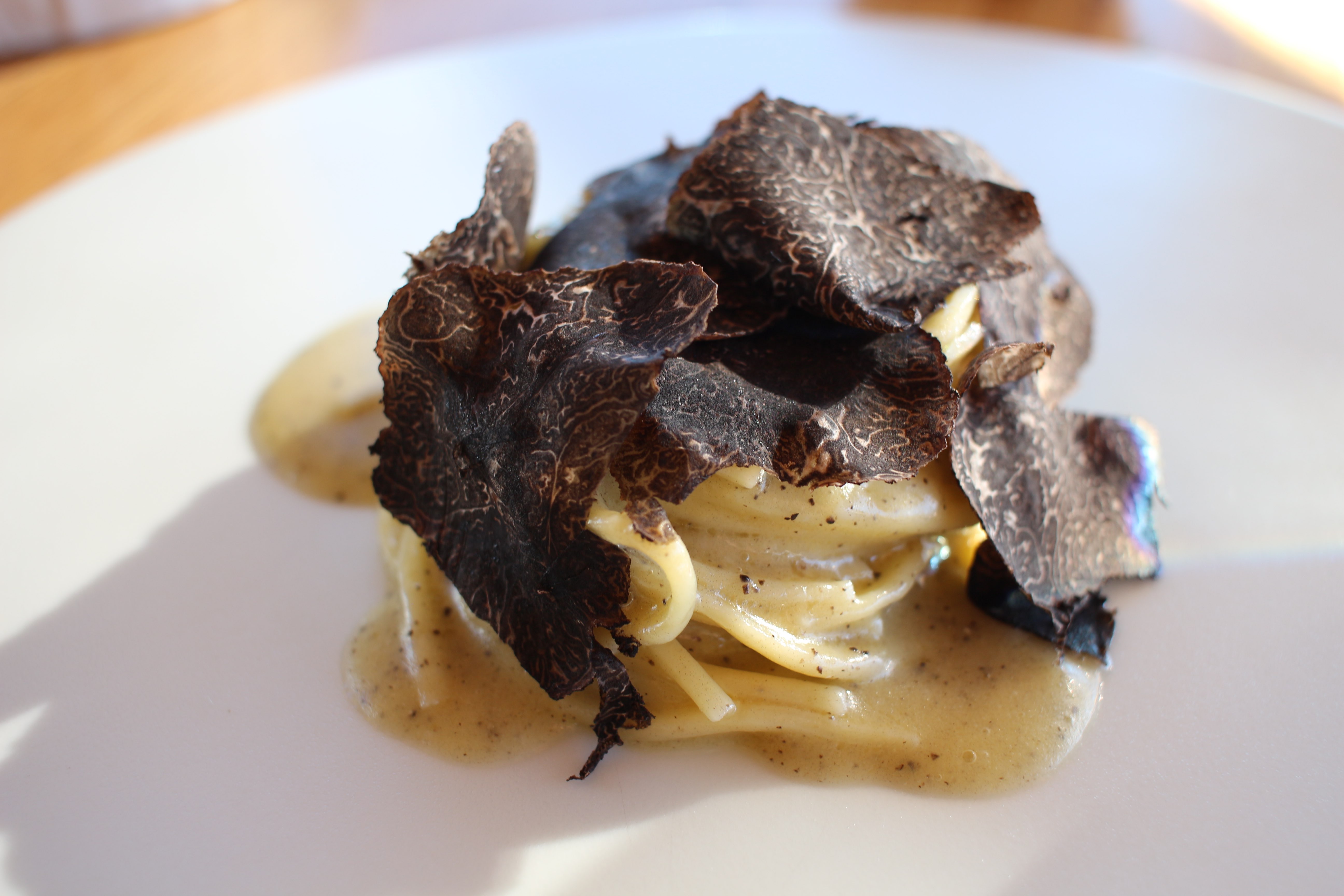 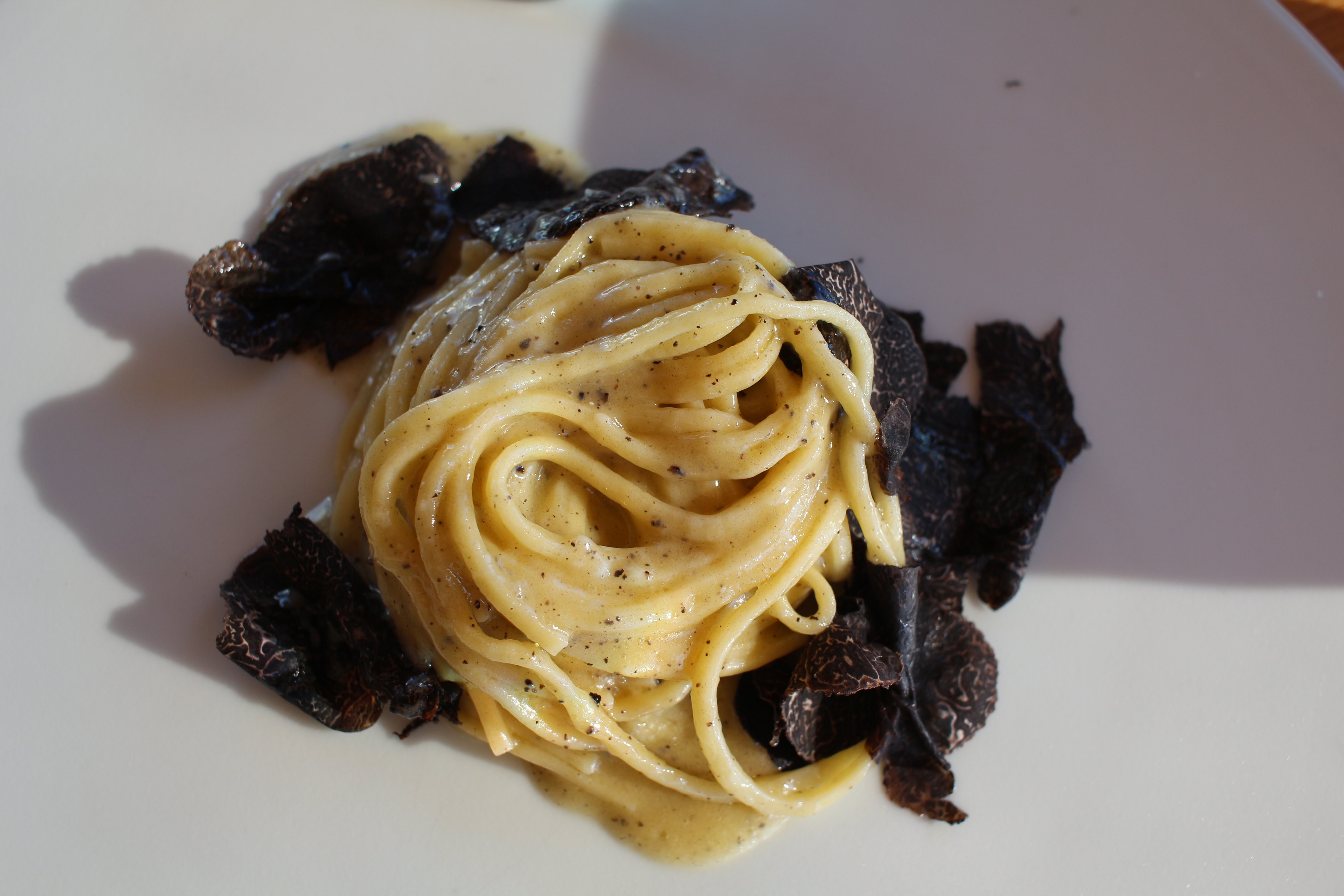 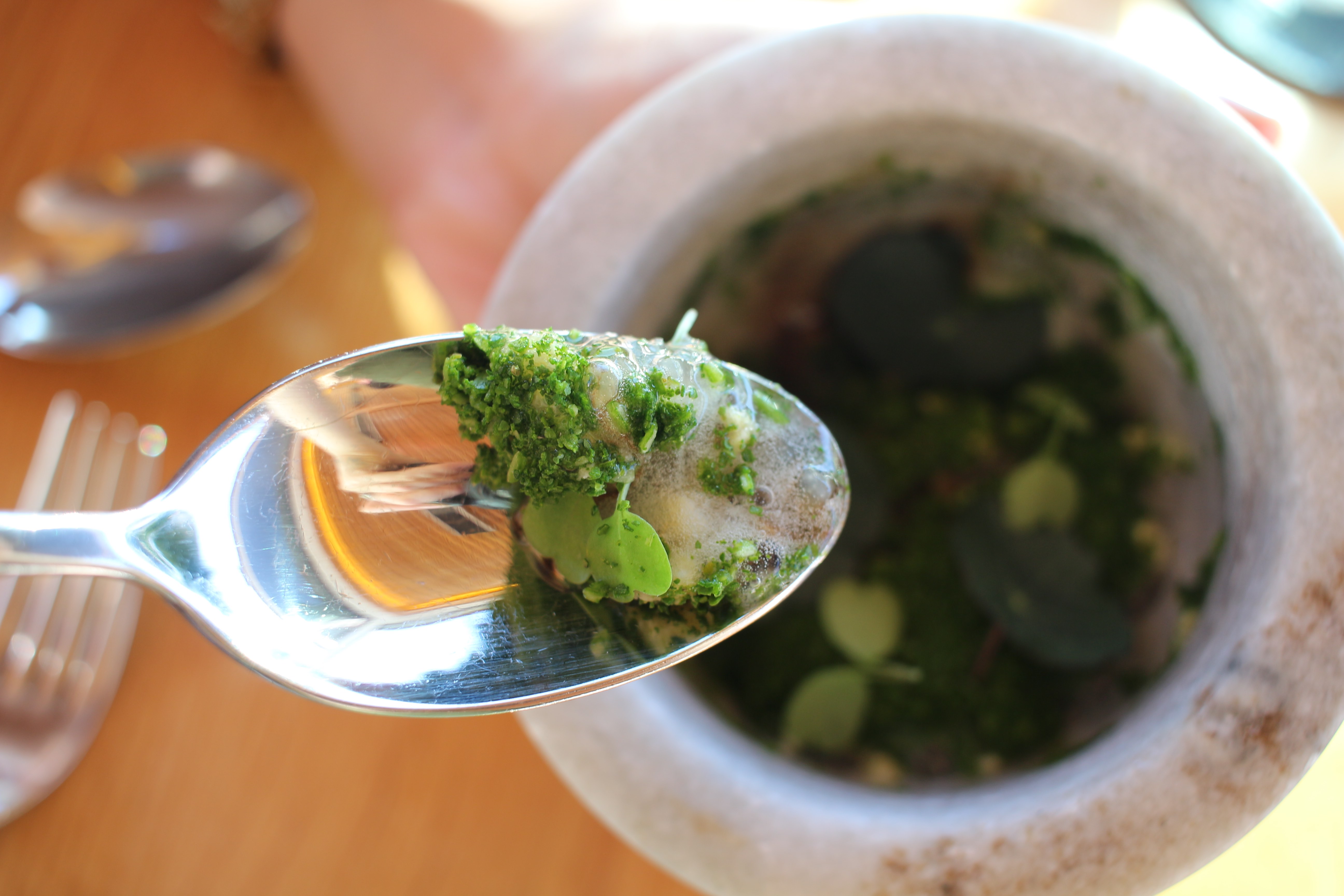 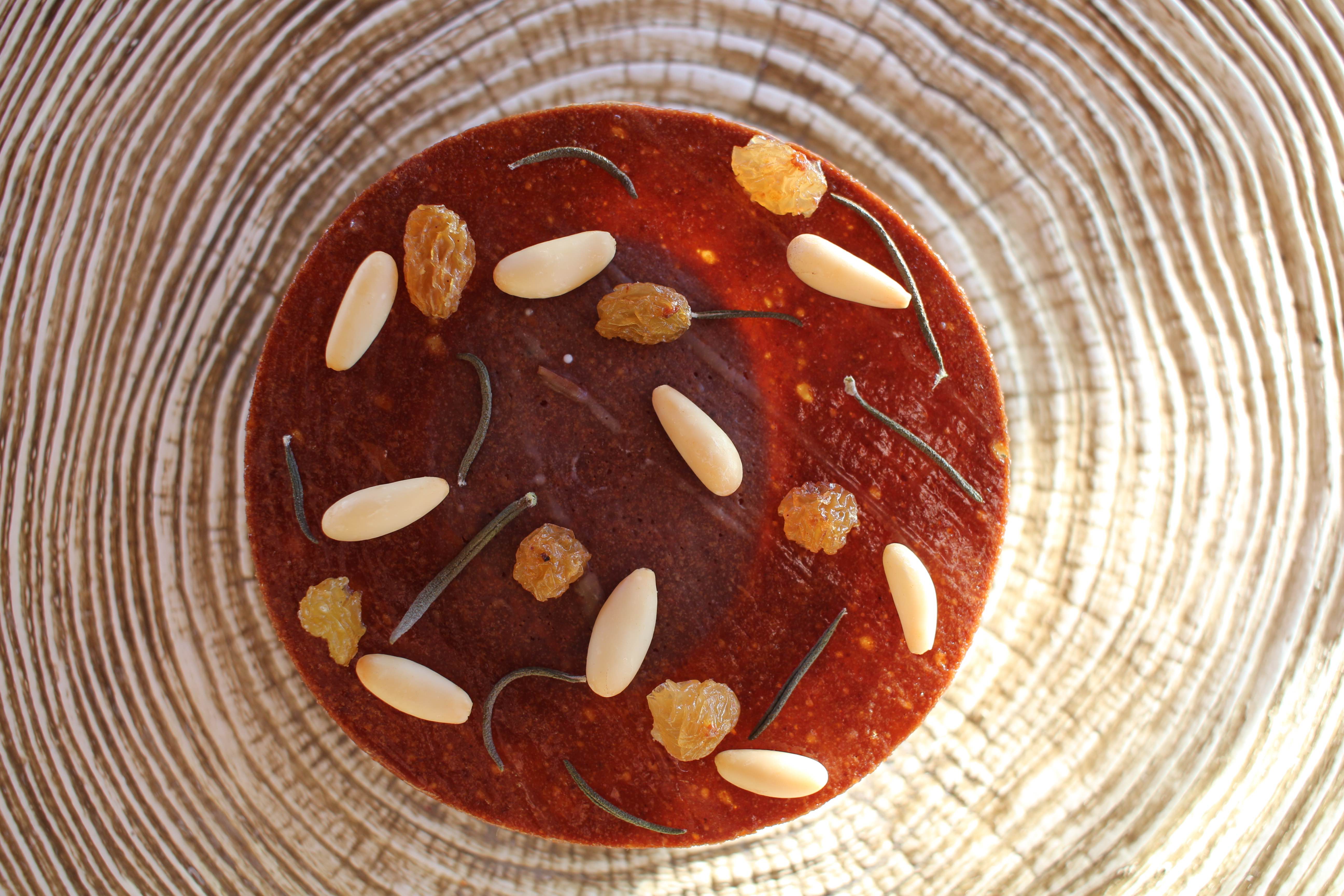 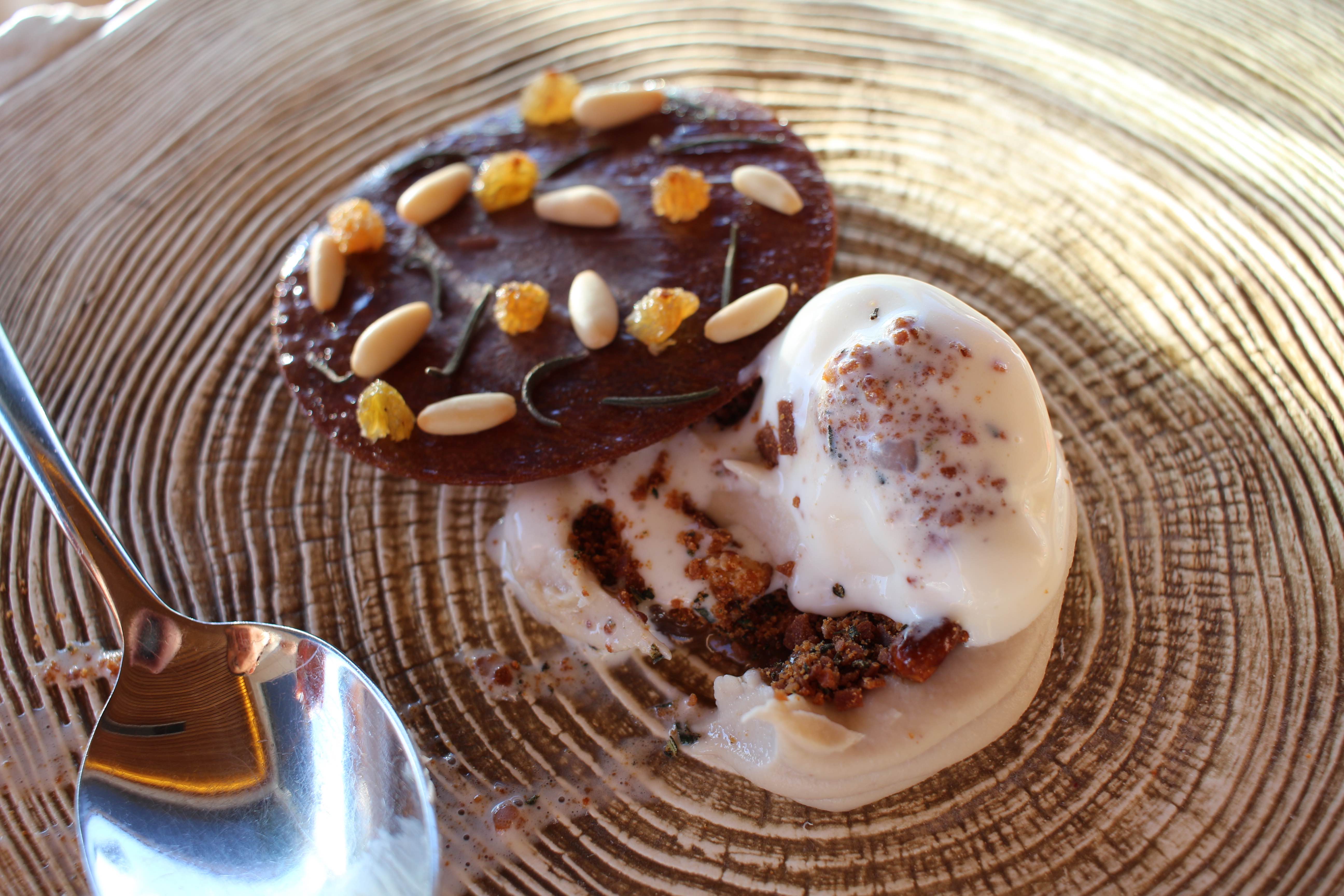 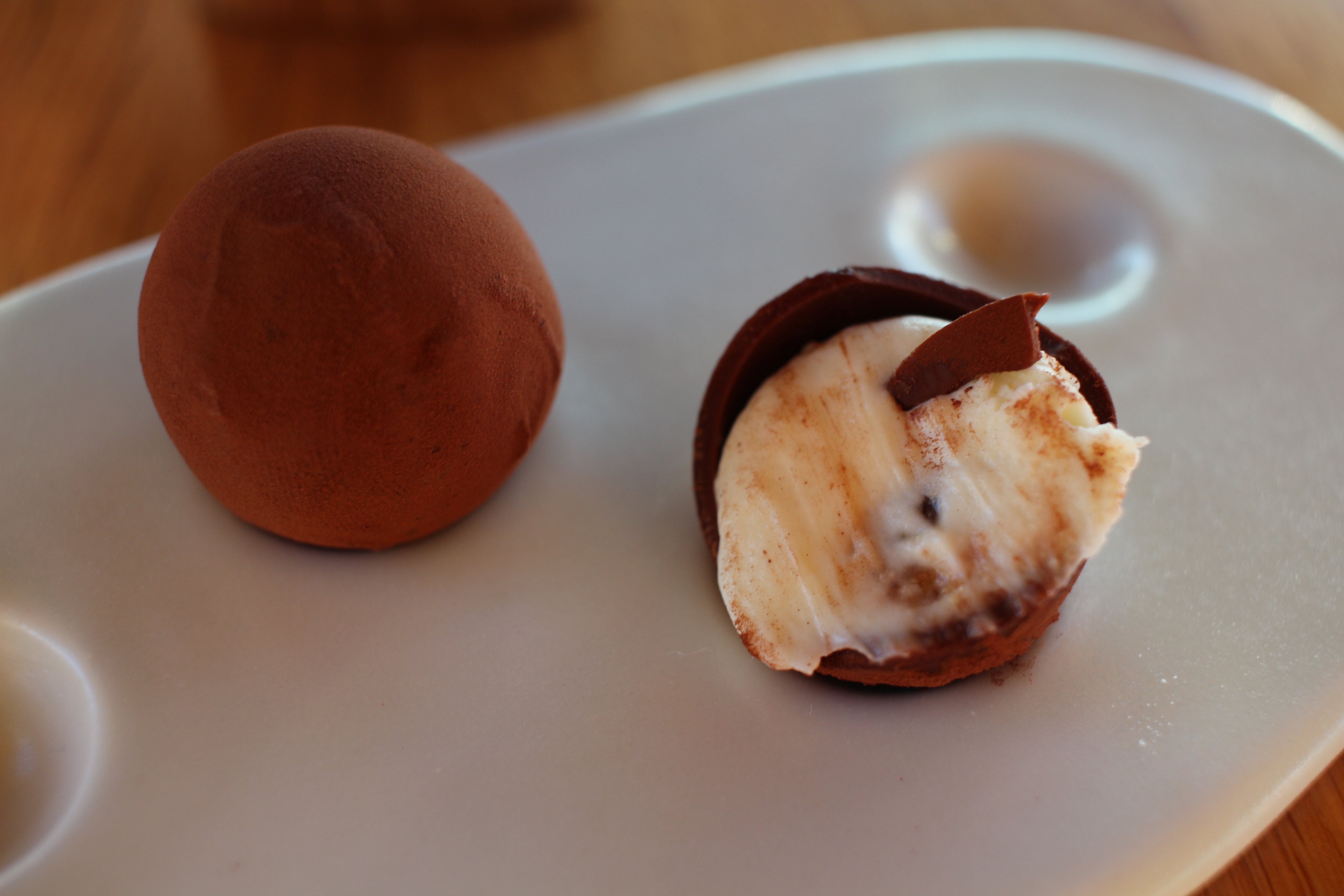 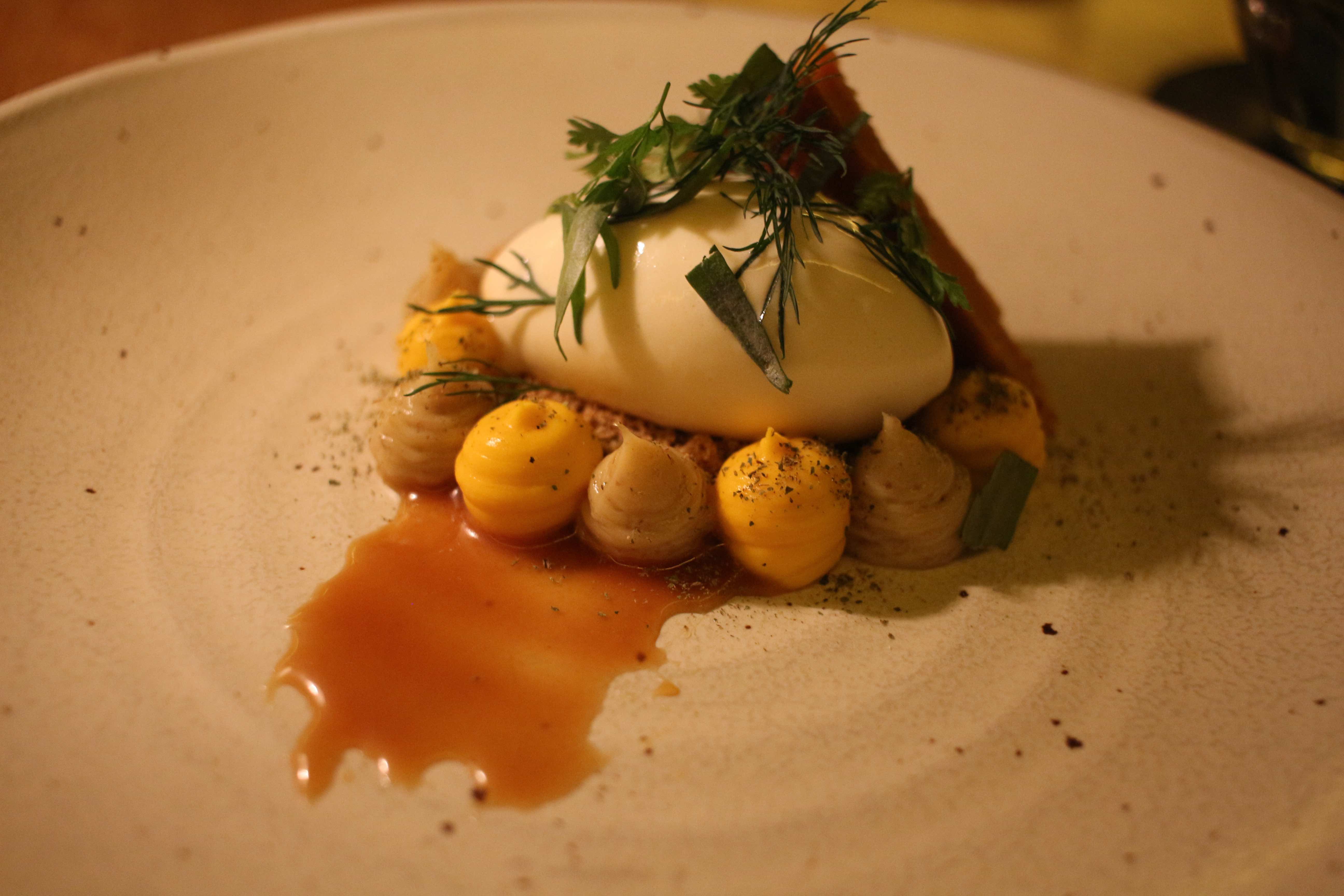