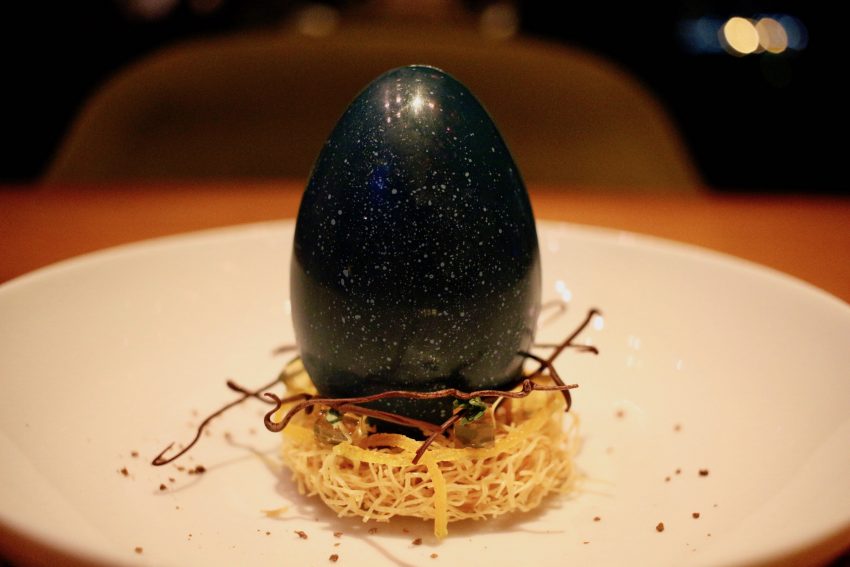 British food at the height of sophistication, without the pretentiousness.

MUST ORDER Red meat; meat fruit; triple-cooked chips
VALUE 9.5/10
AMBIANCE Culinary candy store (as well as the most professional dining environment in Australia)
SERVICE Perfection
WOULD I GO BACK? I went twice in my six day visit, so yes

Walking into the Crown augments your expectations of lavishness. This is a spectacular experience. I’ve never been inside such a luxurious building before.

Dinner by Heston is on level three, along with a bunch of other restaurants. It’s very dark, with sweeping views over Melbourne and the Yarra (and Sealife; and an ugly highway). Pillars breathe fire below. Bronze lights above me shine a very yellow light.

I arrived at 9.30pm, straight off the plane. They were still setting tables at 10.05pm. Unsurprisingly popular.

This restaurant has the most incredible cocktail list I’ve ever seen. The descriptions are so detailed. The food menu itself is a work of art. The menu’s letters are pressed with metallic leaf; and tell a story, harking back to seriously traditional and pre-traditional British specialties. Some recipes are over 800 years old. Unusually, its à la carte, which means you’re not wedded to a degustation. The flip side of that is that you’ll end up paying a lot more than you would for a degustation equivalent. A minimum of two courses per person is required.

The atmosphere deserves a comment. Somehow it’s easy, unpretentious and welcoming, but mind-blowingly sophisticated and smooth. I doubt many chefs put more thought into their restaurants (into every aspect of the dining experience) than Heston Blumenthal (although the head chef in Melbourne is Ashley Palmer-Watts). There’s also a two-Michelin-starred Dinner by Heston restaurant in London, officially listed as one of the World’s 50 Best Restaurants. Blumenthal’s homepage accurately boasts: “Dinner by Heston Blumenthal is one of the world’s most exciting restaurants.”

Nowhere in Sydney does service like this. There are plenty of British accents and smiles. Everything was explained in a friendly, alert manner. I can confirm the rumours about being assigned a toilet buddy (a waiter who accompanies you all the way in to the bathroom, with explanations). The staff took over each other’s jobs for the sake of speed, and co-ordinated like clockwork. I think my waitress’ name was Jess, and she’s the best waitress I’ve ever had. Gourmet Traveller would agree, having awarded the restaurant Maître D’ of the Year 2019. The magazine describes the service as choreographed, confident, trained; ‘a sum-of-its-parts scenario’, ‘meticulously kept uniforms’, skilful, witty, informed, relaxed…and I couldn’t agree more. My favourite line from their review about the staff’s service reads: “If it’s not genuine, it deserves a swag of acting awards.” Perfection.

The sourdough is also perfect. Thick; soft; chewy; warm; crusty; fresh; slightly salty with a fermented flavour. Somehow, it has hints of caramel and coffee.

The meat fruit ($38) is disguised as either a mandarin or a plum, depending on the season. In July, I get a plum. The stem and leaf are real. The outside skin is made with orange peel, long pepper, cloves and cumin. Inside the fruit is a creamy, light, aerated chicken liver parfait. It’s not what you’d expect. The skin is soft, and the parfait (which is really a pâté) is not rich at all. The grilled bread is exactly what you want with it. Rigid and toasty.

The Black Angus rib eye ($84) only competes with Sixpenny’s chuck wagyu as being the finest steak I’ve ever eaten. According to Heston, “our cuts of Black Angus are dry aged for a minimum of 28 days and cooked over wood and charcoal embers.” Every condiment is mind-blowing, and unlike anything you’ve ever eaten. The chips look so simple, but they’re triple cooked in wagyu beef fat. Heston nails that golden chip ratio between a crunchy outside and pillowy inside. The depth of flavour of these chips is a chemical wonder. I see no salt or herbs, but I can taste them. If you don’t get them elsewhere in your meal, be sure to order the tripe cooked chips as a side ($16). The sweet mushroom ketchup is another one of Heston’s chemical masterpieces. It’s made with Paris brown mushroom juices, beef stock, white soy and butter mushrooms. Roast bone marrow pieces on top of the Angus were literally bursting beads of flavour that went straight to my heart. The rib eye itself had a remarkable texture. It was soft, with no crunch or crust, whereas I always expect the outside of wood-fired meat to be slightly charred and dry. Here, there’s not a trace of charcoal. Everything defied food chemistry.

Tipsy cake ($32) was supposed to be the showstopper. It’s Dinner’s most famous dish, alongside the meat fruit. Traditionally, it’s a cake of fresh sponge soaked in sauternes (sweet French wine) and brandy. This was dangerous territory for me, because I don’t like alcohol in desserts. Heston’s version is accordingly soaked in brandy and sauternes, plus vanilla cream (which is a thin, buttery sauce). On the side was a 48-hour-glazed, hot, spit roast pineapple. The pineapple is covered in smoked syrup, lime and apple caramel. But it’s not too sweet. The best part of the cake it that it’s brioch-y. The worst part is that the vanilla cream should have been a thick custard, with more eggy-ness of vanilla (it was slightly floury, and runny like melted butter).

The eggs in Verjuice ($32) is actually just one egg, resting on an edible nest. It has a shell of chocolate (which even has spots on it like a real egg!). Externally, it’s surrounded by bitter vodka chocolate sticks, yuzu jam, mini jelly cubes, candied orange and baby thyme. Inside is a coconut pannacotta (the eggwhite) with a coffee parfait underneath (which has a light instant coffee flavour). The pannacotta is yoghurt-y, with a coddled texture. Again, this dessert is not sweet until you yet to the runny ‘yolk’ of Verjuice and citrus.

I am obsessed with gingerbread, and could not go past the gingerbread ice cream ($30). It was a smoked walnut and caramel mousse with a mulled wine poached pear. This dessert was extremely disappointing. It didn’t taste anything like gingerbread. Absent flavours included that familiar combination of butter, caramel, golden syrup and spice. If it hadn’t cost $30, I wouldn’t have finished it. This dish was an anomaly.

The fun part is yet to come. You know how I love my freebies (bread, snacks, petit fours). Dinner by Heston wins the award for Best Freebie Restaurant Ever. Wheeled out before me is (what looks like) a Singer sewing machine on a cart. There are only four of these carts in the world, designed by Sebastian Byrne. In front of the Singer are bowls filled with bits of chocolate, popping candy, crunchy delights and nuts. Then there’s a mixer bowl full of a vanilla custard-based ice cream mixture. Luckily, Heston goes hard on both the custard and the vanilla. Winner. The waitress pours in some liquid nitrogen and makes us fresh ice cream at the table (with your choice of two toppings!) I’m offered a blood orange compote, and it’s already sliding into my super thin, slightly salty brick pastry cone. I wanted to say no (in fear of sweetness overload), but it turned out to be cooling and not too sugary. The texture of ice cream when it’s freshly, instantly frozen with nitrogen is unique. It’s the perfect level of frozen. As smooth and soft as a mousse, without the wateriness of ice cream when it melts.

The concept of finishing the meal with tea and biscuits is turned on its head when Heston brings me an orange blossom and Earl Grey chocolate ganache, to be spooned onto a caraway seed biscuit that tastes like a chocolate ANZAC. Somehow, the ganache is light, despite looking rich.

Make sure you look at my Instagram highlights to see videos of the experience and the venue.

Order next time: Eventually I want to try everything, especially the snail porridge and the Vegemite dessert 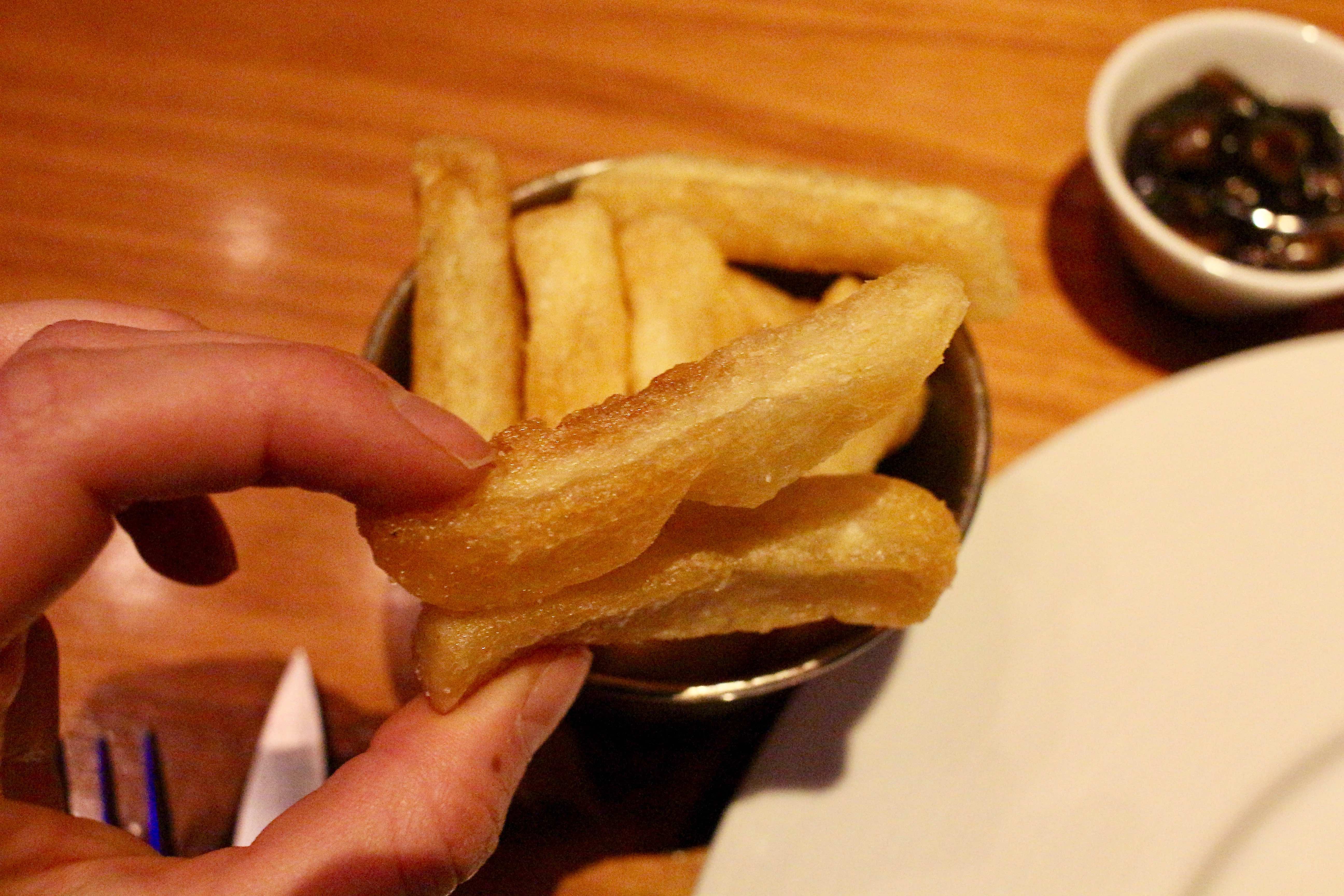 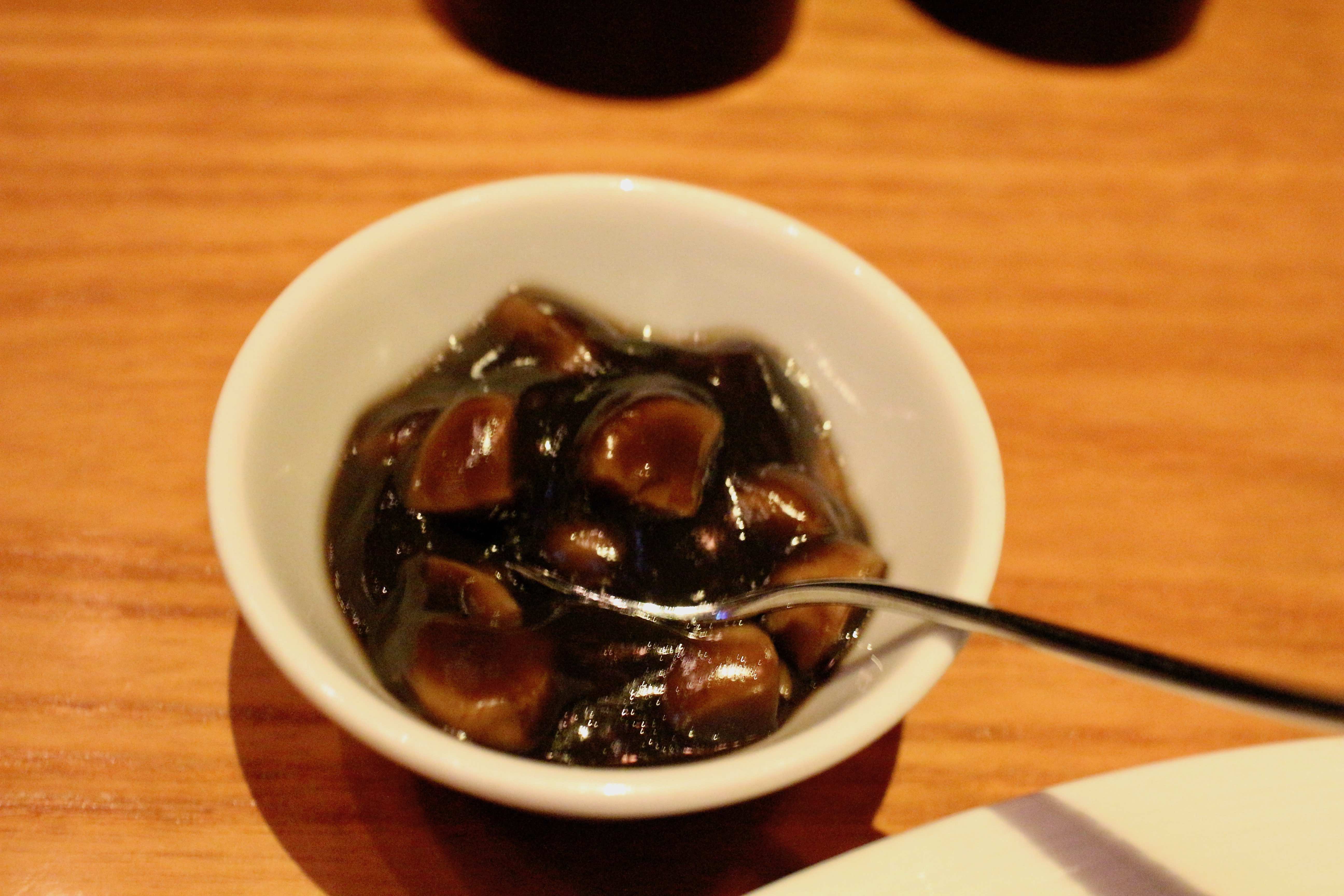 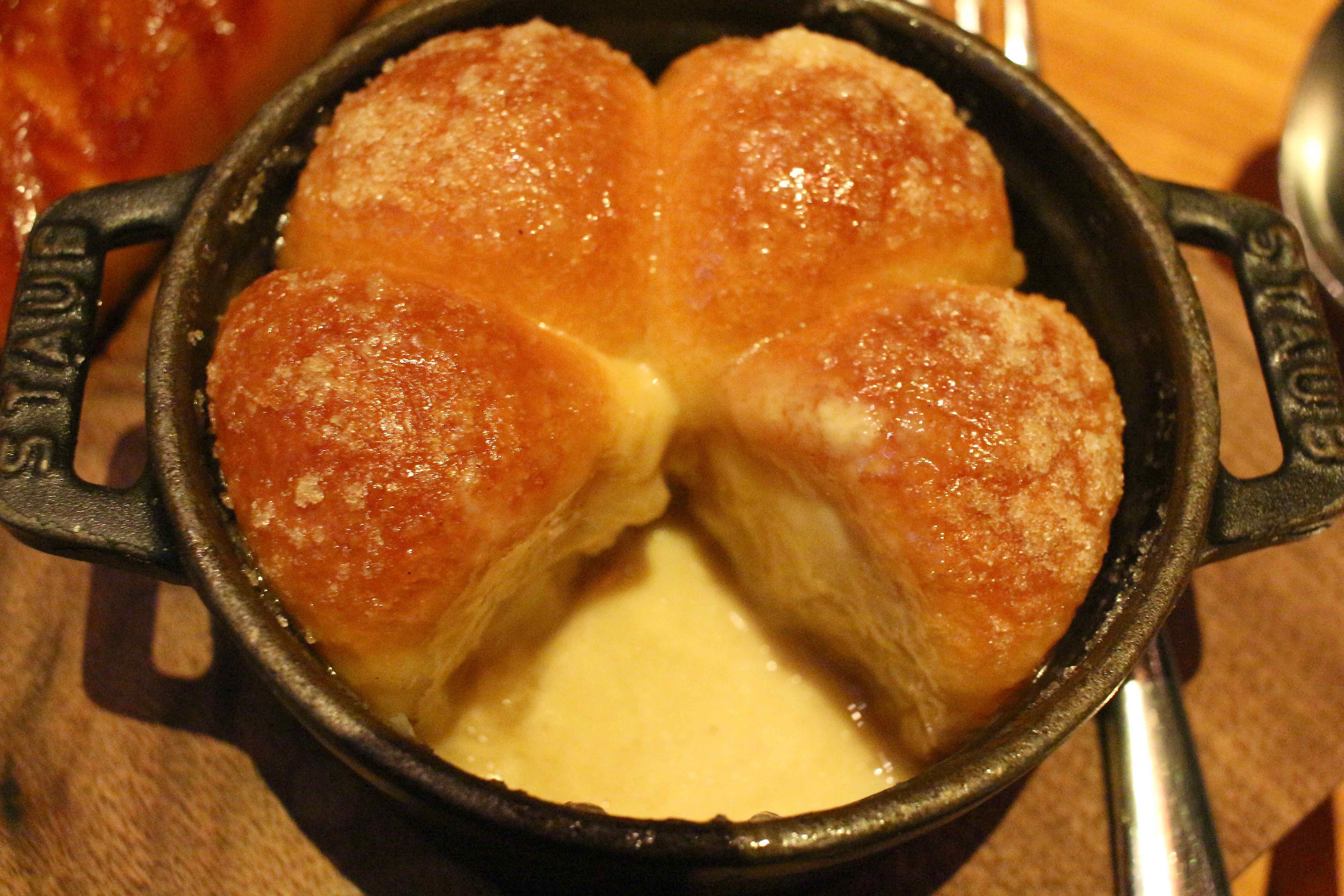 Tipsy cake. You can see the buttery, alcoholic vanilla cream in which it is soaked. 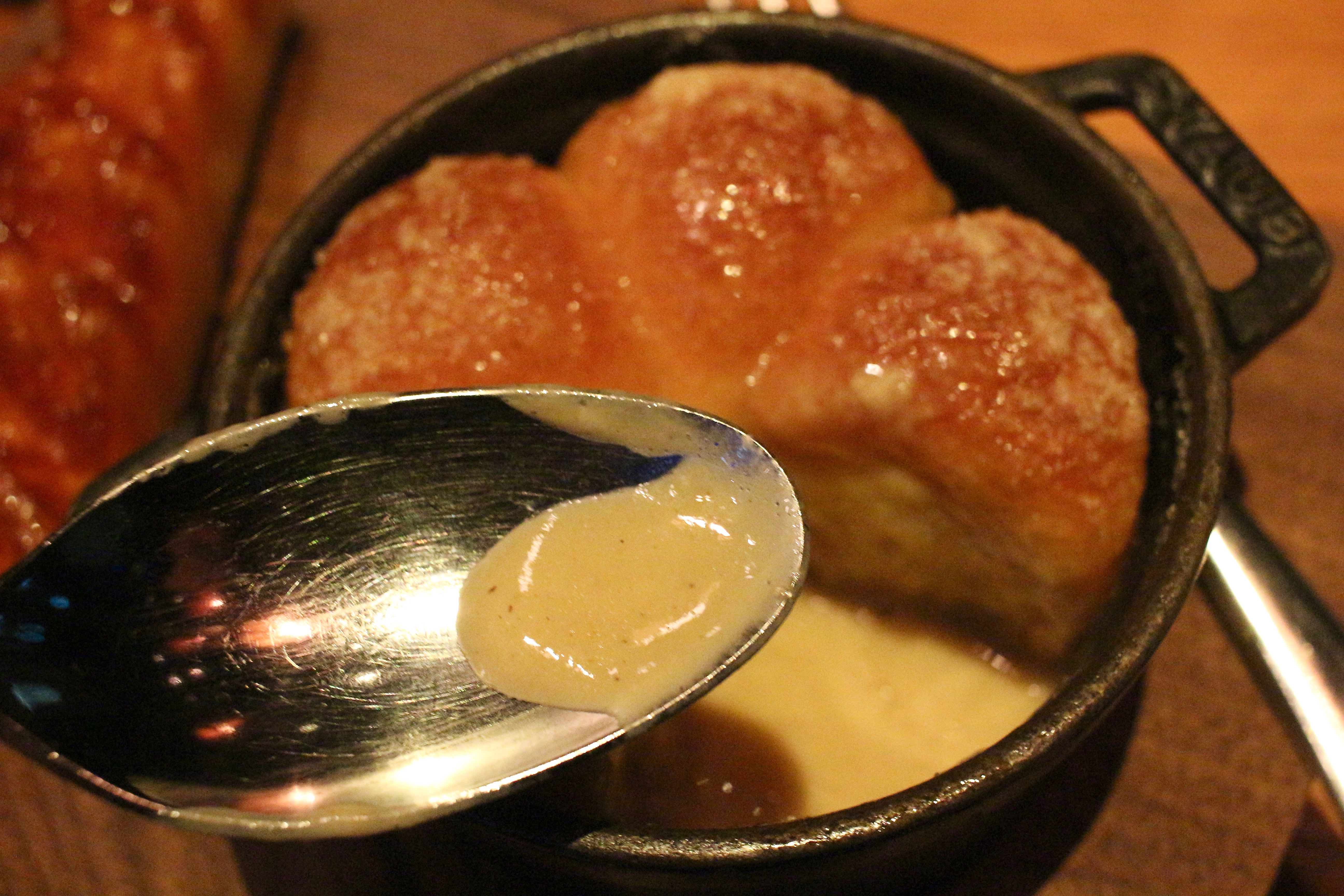 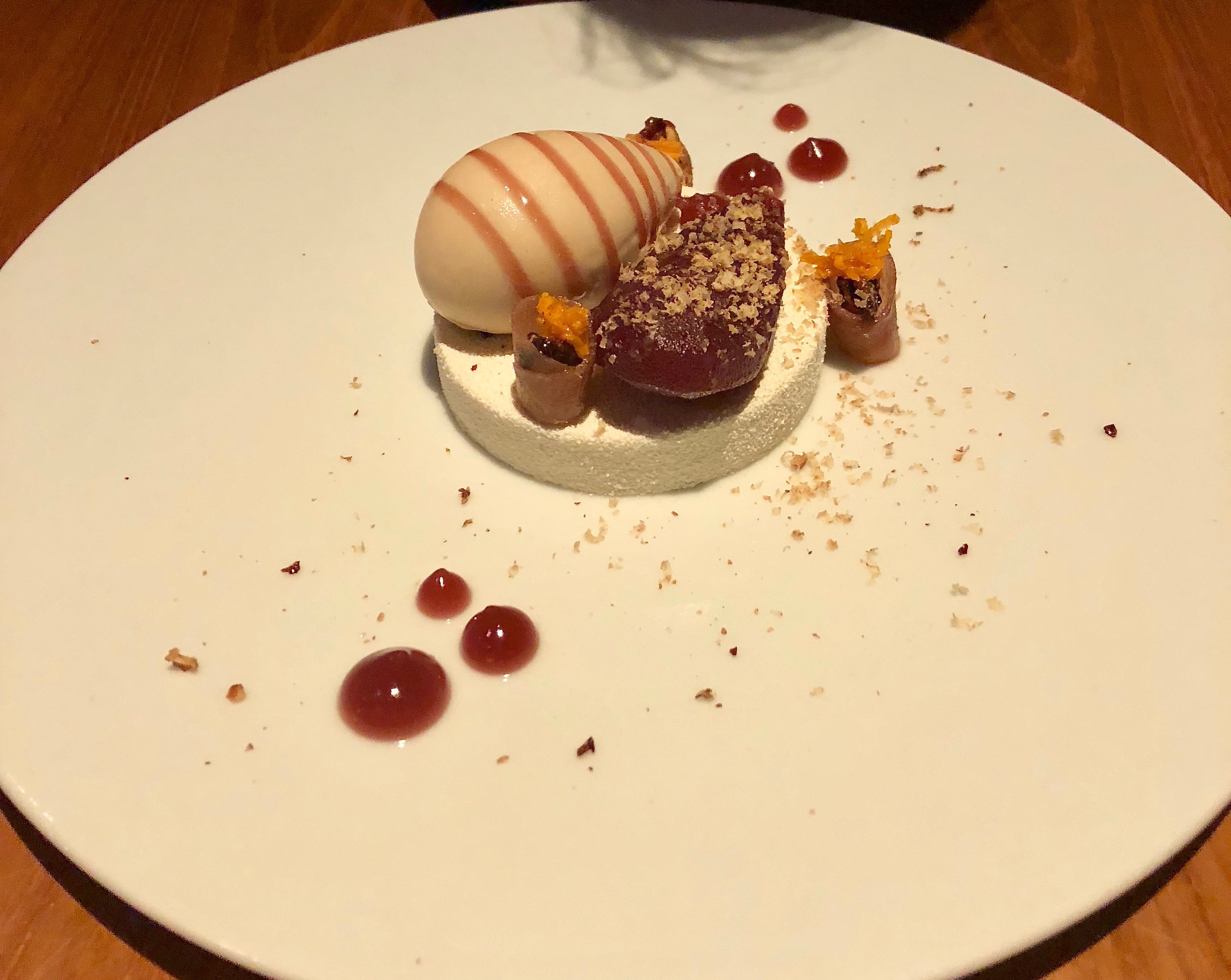