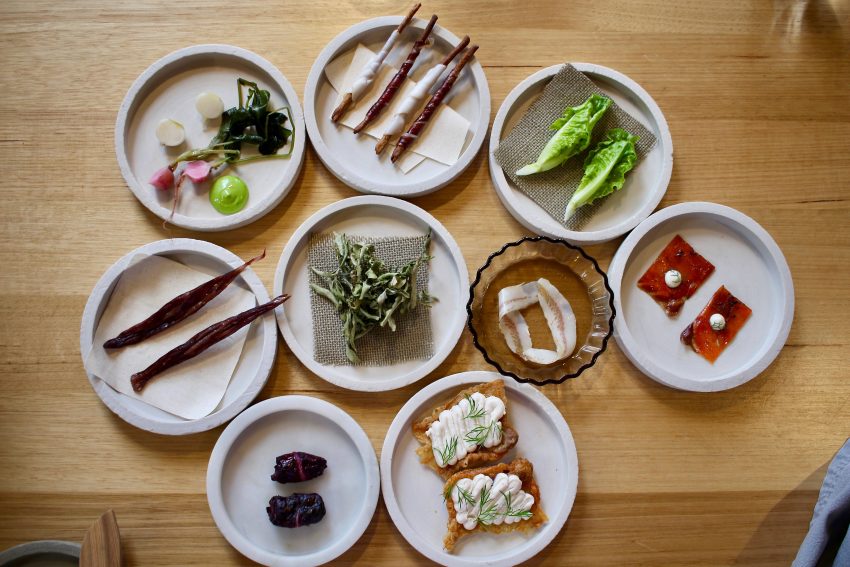 It’s a one hour train ride from Southern Cross Station in Melbourne to South Geelong Station, plus a pleasant fifteen minute walk to Igni. It’s a restaurant you absolutely do not want to miss. The food is contemporary Australian. You can’t see the wood-fire oven, so all of their magic is hidden out the back.

Igni is one of those restaurants where the table beside you is also having the eight course set menu, but are being served different dishes. This creates neighbour envy. We saw some appealing plates of spaghetti-looking saffron cuttlefish, pork chops, mini scones and berry sorbet; to name a few of our neighbours’ dishes not served to us. The waitress explains that it’s an incentive to come back, and to keep things interesting. I say it’s mind games.

Following along that same line of logic, after the fifth course we expressed interest in having another savoury course. This was not part of the menu. We just wanted something else before dessert. Consequentially, we were offered a ‘secret’ ninth course (which we eagerly assented to), not expecting it to be anything special. We presumed they wouldn’t keep a highlight secret. Additionally, we doubted it would be a protein, because why would they have spare proteins lying around? Hence the excitement when a fresh set of cutlery was delivered with a serrated knife. I’ll describe the secret course further below.

Igni is marketed as the King of Snacks. They don’t bring the snacks out slowly like most restaurants, but rather all at once on little equally-sized plates. It felt like a picnic. There was biltong-like, air-dried wagyu beef flank; pickled Portarlington mussels wrapped in fermented tomato and bitter radicchio, flashed on the grill; guanciale (not very flavoursome); a crisp, baby, Bellarine Peninsula cos lettuce heart filled with an oyster emulsion; smoked lardo on a rye pretzel breadstick and two similar sticks wrapped with dry, aged duck (which tastes like rich pancetta without the fat); crunchy Point Henry saltbush (shallow fried and dusted in vinegar, that tastes like salt and vinegar crisps); pickled radish with the tails left on (the tastiest part); fermented turnips and an onion emulsion; and trout with dill, cured in salt and sugar for two days, rinsed and sliced, marinated in soy and spice and air-dried above the fire. The highlight was always going to be the baked chicken skin shipped with cod roe and dill, which we left until last. Cheap thrills, but I’m a sucker for crispy saturated fat.

The pace of the meal was only just inside what I’d call well-timed. We were brought out new cutlery a while before the next course actually came, which put us on edge.

I rarely drink (alcohol) when I first visit a restaurant because I want to experience the food as objectively as possible. I always get strange looks from waiters when I discard the wine list. Here, I was voluntarily given a complementary glass of Perlant non-alcoholic apple cider (by Eric Bordelet) which changed my conception of the simple beverage. It was rich, slightly dry and uncarbonated. Yum.

You know the drill. Bread is important to me. Igni takes the cake (bread). The first round of saltbush rye comes steaming to the table, oven-fresh, with a plume of whipped brown butter. The notes of caramel in the butter blend perfectly with large shreds of saltbush in the roll and melt together in their own glory. Throughout the meal we ordered TWO MORE ROUNDS of this bread. The second round was very different to the first, because the bread had gone a bit hard. Without wanting to leave the restaurant feeling flat about the second round, we asked for a third round of ‘hot, oven-fresh’ bread. This final round was the best one. It was piping hot with the most unbelievable contrast between the thin, crunchy crust and airy centre. This is as close as bread gets to PERFECTION.

Dory, cucumber and roe was a visually impressive way to start. The cucumber ‘jus’ poured around this dish was truly remarkable. It was so viscous–yet pure. The cucumber flavour was intense and the dory was raw and firm, lightly dusted in white pepper.

Broccoli heart with bitter, fermented winter milk was another pleasant surprise. It doesn’t taste as charred as it looks. Soft; not mushy; hardly oiled with the perfect level of flavour.

The first thing you notice when the fire-roasted pumpkin with jersey cream comes is the smell. The caramelised jersey cream contains whey. It’s consequentially creamy and salty, hemmed in with perfectly toasted pumpkin seeds (meaning crunchy, aerated, and as close to burnt as possible). The pumpkin is charred and only just cooked.

Bass grouper with pistachio was the least exciting course (Igni sets a high bar, though). The brown pistachio purée stuck to the palate. The honey glaze formed a lovely sticky crust that would have been better if it covered the whole outside of the fish. The hero became the glaze, not the fish. We didn’t find the grouper tasty enough.

Smoked duck, macadamia purée and endive was a splendid dish. The duck is smoked in hay, and you can taste it. The skin was crispy, and the meat was juicy but not fatty and tough. The shining flavour was blue-cheeseiness inside the endive (which came from duck liver pâté).

The ‘secret’ ninth course was the quail, blood pudding and emu bush gravy. This is a MUST ORDER. The quail was delightfully moist, with ever-so-slightly charred skin. It’s very common for restaurants to serve a bony cut of quail with minimal flesh, whereas this piece only had two bones and was extremely generous. The blood pudding was lovely (although could do with more blood and less pudding). The Mastermind behind this dish was evident in the gravy. First of all, we were left with the pot of it to use at our own discretion. A very wise option. The waitress seemed to suggest some people didn’t like the flavour of it, whereas we adored it. It was thick, not fatty, and not too salty. For my friend, this dish (“the surprise quail”) “pushed it over the edge” and rendered Igni the best restaurant he’s ever visited.

Tête de moine, lemon, mountain pepper was exquisite. What a creative way to serve cheese. Apparently it’s a Swiss cheese, named (not by Igni) because it allegedly looks like a shaved monk’s head (also apparently exposed to oxygen to make it smelly). Can confirm, it looks more like a flower. Served in a sticky pool of honey and lemon rind. The flavours were just like saganaki. If a cheese course can be described as light, this is it.

Buttermilk custard with black figs and red cabbage was a surprise first dessert course. We were both a little spooked by the frozen red cabbage. However, in combination with the fermented flavour of the buttermilk, it was innocuous and pleasantly cooling. This dessert had almost no sugar, which really heroed the fresh figs. It was very different to my conception of custard (it was cold, not eggy, with more of a mousse/crème fraîche consistency). I loved how light it was, but I think a warm caramel or butterscotch sauce would have tied it together.

When told the last dessert in front of me was Jerusalem artichoke ice cream with unfiltered honey I was a little disappointed. I’m not a fan of the trend of artichoke desserts. However, this was one of the highlights of the meal. The ice cream had a flowery, tea flavour; which was actually the honey (these bees live opposite the Botanic Gardens, so their honey tastes floral). Known as ‘Helena’s dessert’, a tribute to the lady who owns the local bee hives, it could have been named after Zeus’ wife. The texture of the ice cream was impeccably smooth, but not creamy at all (light like a sorbet, without being sugary or watery). The ice cream was sitting on a honey cake foundation with a thick, caramel-like, honey crust (covered in honeycomb, soaked in honey butter). It was crunchy, and sticky. There was a beautiful shungiku flower sitting on top of the scoop.

The three petit fours were the only disappointment. One felt like it was all cake (a honey and pear tart made with almond meal), and the other was all sugar (a burnt pineapple jube). I liked the aged persimmon covered in beeswax, though.

At Igni, there was no cheating with heavy seasoning, or with sugar and butter. There was a real focus on driving flavour out of the ingredients themselves. None of the dishes were overly complicated, nor with too many elements. There were no theatrics or liquid nitrogen to hind behind. All these dishes were SO flavoursome. We left the restaurant feeling very full (because we’d eaten three rounds of bread, plus a secret extra course) but not gross and heavy at all. I would suggest all diners order the same, because these bonuses were major highlights. Igni triumphs. 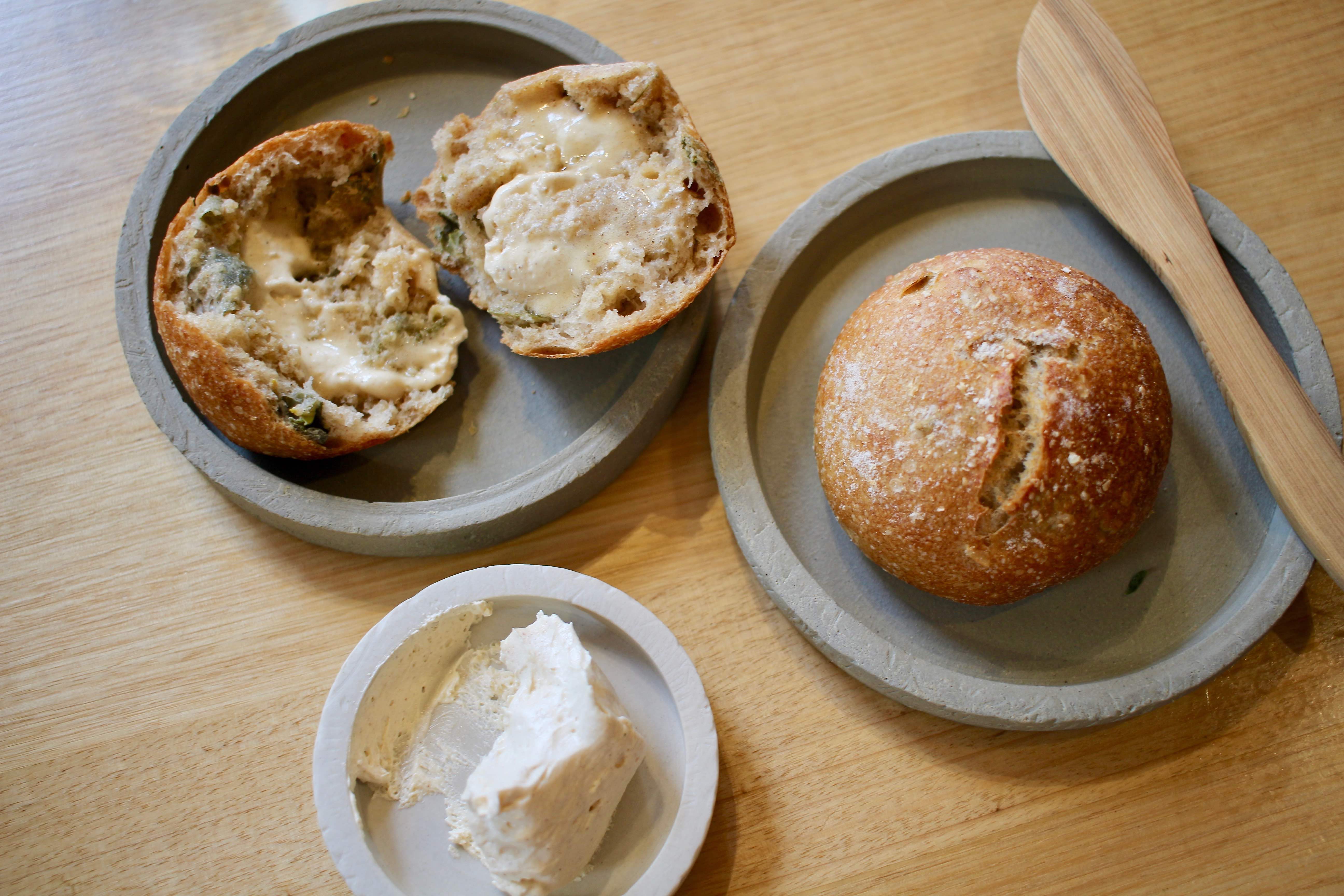 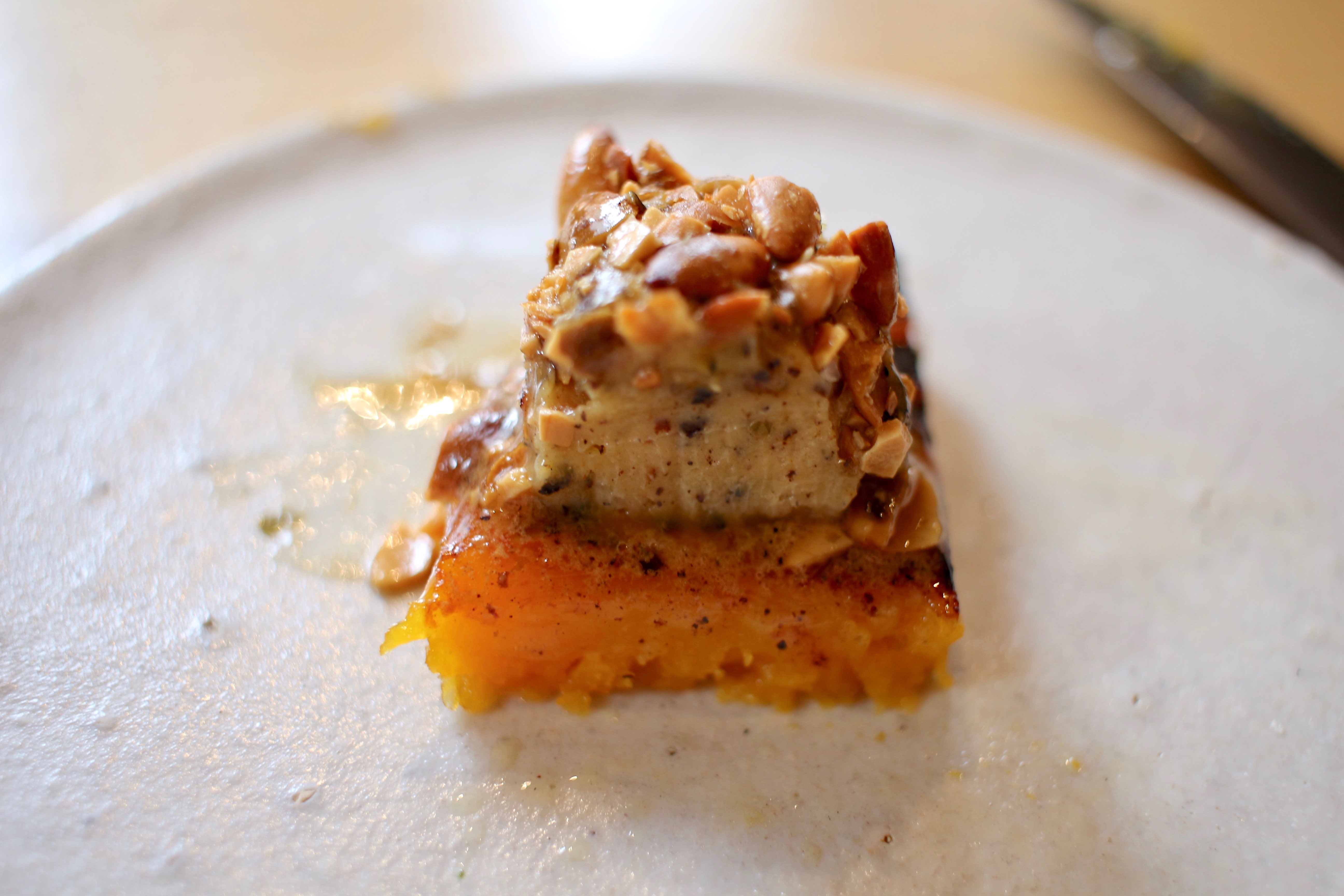 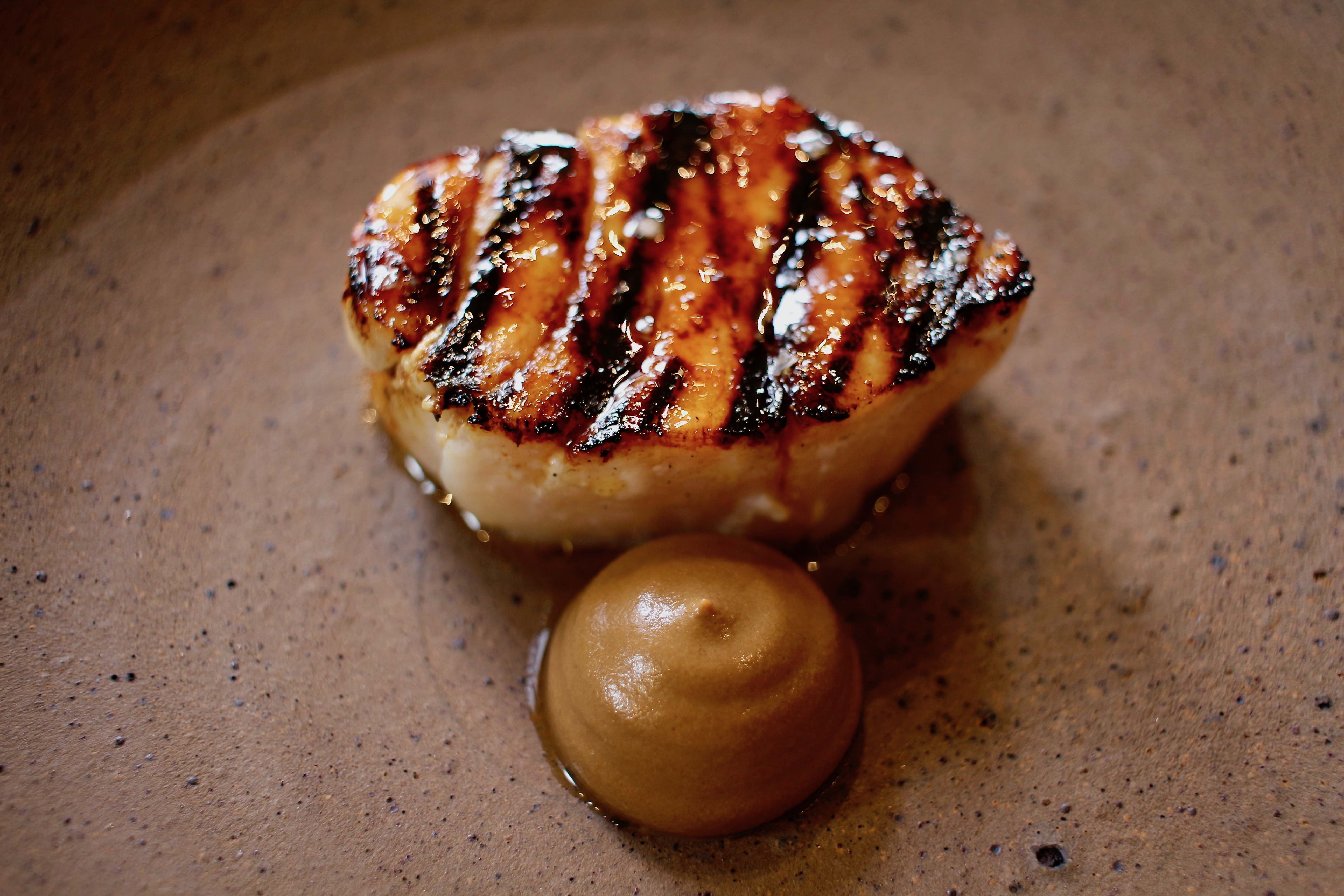 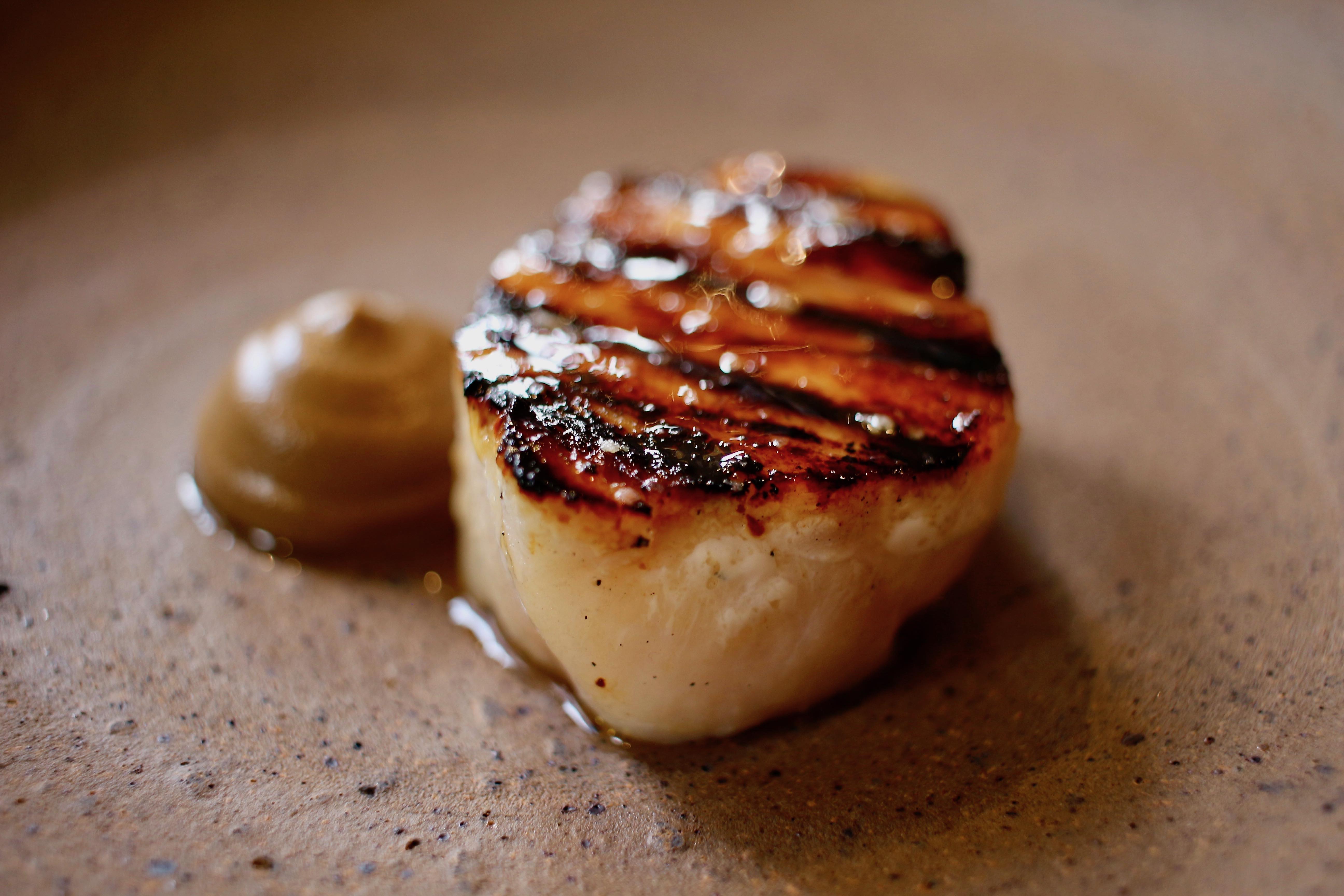 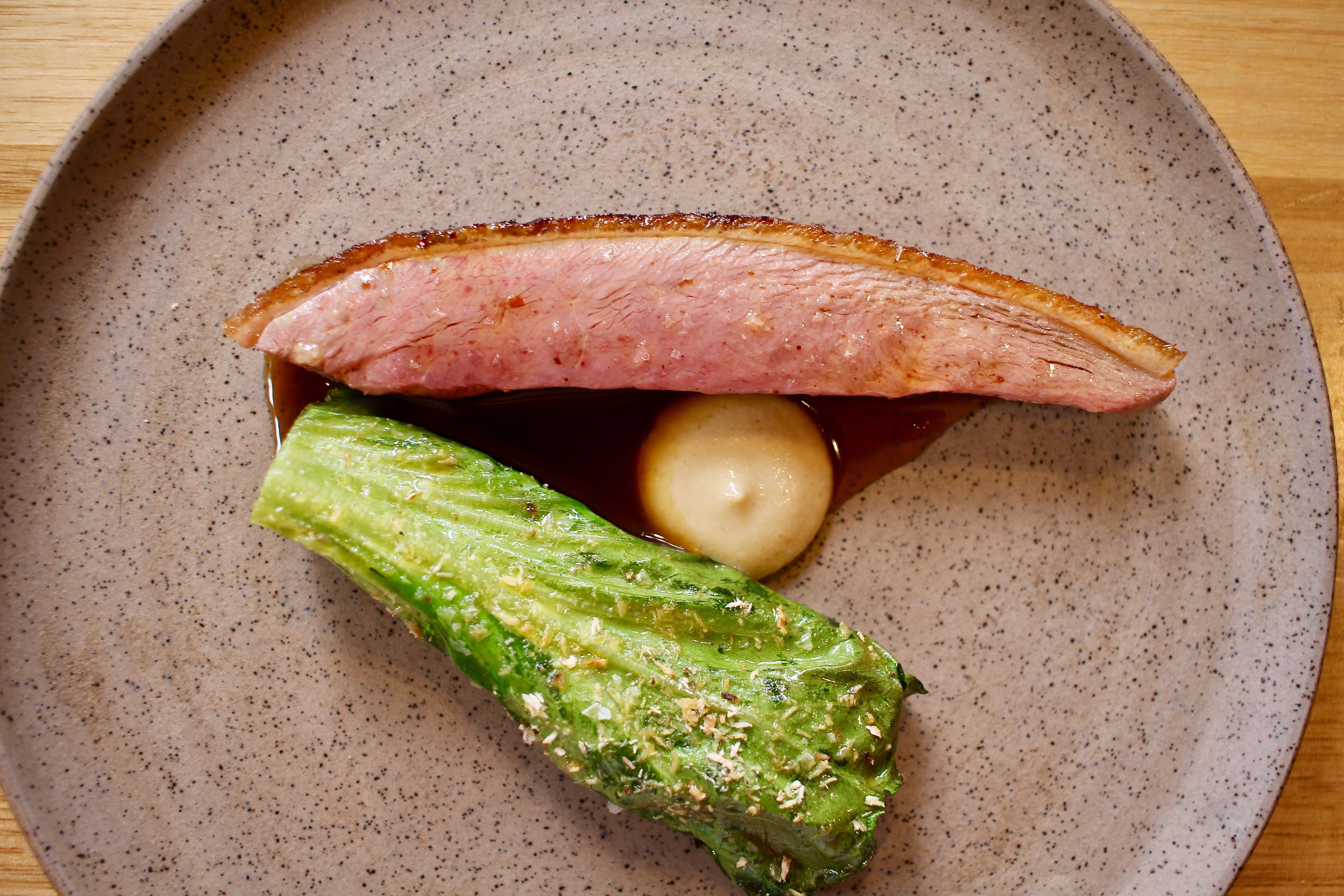