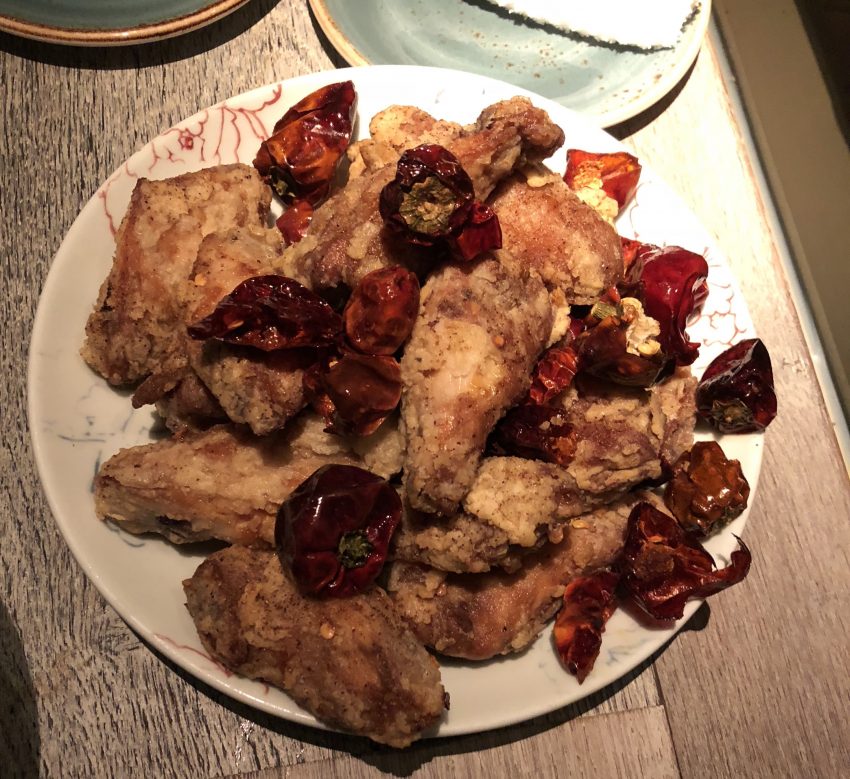 Big flavours in a dark room.

MUST ORDER Any of the dumplings; raw tuna; passionfruit marshmallows
VALUE 7/10
AMBIANCE A dungeon for rich people
SERVICE Good
WOULD I GO BACK? For the cheap lunches

Don’t be put off by the ‘Spice’ in Spice Temple. It’s not that bad (for those who are scared of a little spice).  I like spicy food far more than your average person, but for those who don’t, Spice Temple helpfully highlights hot dishes on the menu with red font. For me, however, the red font is a false friend. Some are red hot, some are better read as not.

On my not-too-hot-red-font list are the handmade egg noodles with XO and bacon ($29) which slide down a treat. But who can resist XO sauce? Stir fried quail and peanuts with steamed egg custard ($44) is crunchy and creamy, but not too spicy. The custard was a bit disappointing as it was too milky and not eggy enough.

Some of my favourite dumplings of all time, which I’ve been back for multiple times, are the Northern-style lamb and fennel dumplings ($29 for 8). I would also recommend the lamb and cumin pancakes ($22).

Also worthy of high praise is the raw Yellowfin tuna with spicy orange oil and lettuce ($39), which sits alongside Saké and North Bondi Fish’s sashimi as my favourite in Sydney (with the exception of the sashimi from Sydney Fish Markets).

The Kung Pao chicken ($49) with Sichuan peppercorns, heaven-facing chillies and cashews ($49) is not too hot to handle, unless you eat the chillies against the directions of the waiter (which I did, cleaning out my plate and my stomach simultaneously).

White cut chicken noodle salad with strange flavour dressing ($29) is not a highlight, despite being advertised as a signature dish. I didn’t like how the chicken was cold (even though that’s the traditional, proper way of serving it).

Anything on the menu that is ‘numbing’ is delicious, and not actually numbing as far as I’m concerned. The hot, sweet, sour and numbing pork with chilli, sugar, black vinegar and sichuan peppercorn ($47) is just as delightful as the hot and numbing duck ($49).

The three milk cake with dried raspberries, pistachio and almond ($17) is simple (a nice cake, but nothing outstanding), but the Passionfruit marshmallows ($7) are well worth your time. If you’ve never eaten a non-packeted marshmallow, you’re in for a super treat.

The biggest problem with Spice Temple is that it’s far too overpriced. $12 for ‘cucumbers with smashed garlic and ginger’? $49 for stir-fried prawns? Come with a deep-pocketed friend.

The solution is coming for lunch on a weekday. There’s a special dim sum and noodles menu. All the dim sum options are worthwhile (especially anything with pork in it), and insanely good value. The spice fried chicken wings is the best $12 lunch you’ll get in the city–an entire, piled-up plate of juicy chicken with Christmas spices (Cloves? Star anise?).

I used to say I wouldn’t go back here (unless someone else was paying), because Jade Temple was even better. Jade Temple is closed now, so I’ve returned and re-appreciated this bold establishment.

#spicetemple again! Had an amazing lunch of fried squid (Hong Kong Typhoon style), stir fried quail with peanuts and steamed egg custard, white cut chicken with strange flavour dressing and Kung Pao prawns. The custard was amazing that was underneath the quail, but the dish didn't hero the quail flavour (might as well have been beef mince). The Kung Pao prawns were perfection, but the dried chillies were just tokens; there wasn't enough heat in the actual part of the dish that is supposed to be eaten (we were told not to eat the chillies). Squid was a bit of a disappointment, as there was hardly any meat on that plate- it was mostly crumbs and batter. The chilli crumb was lovely but the squid would be nicer without the batter or at least in larger pieces (one of my mouthfuls was pure batter, there wasn't any squid inside!!!) The nuts in all of the dishes were a great complement to the chilli. The White Cut Chicken was lovely being cold and the dressing was great- only criticism would be the pieces hadn't been cut properly, so there was a lot of ligament tearing and bits of fat joining the pieces that were a bit awkward to eat. Despite eating the chillies, it really wasn't that spicy, and we ordered only items in red writing (hottest items)! Overall, I love Spice Temple, but Jade Temple has trumped it for me. I also saw online they used to do a tuna tartare- they should bring that back! @therockpoolfiles @rockpooldininggroup #kungpao #squid #chilli #chicken #spicey #neilperry @chefneilperry