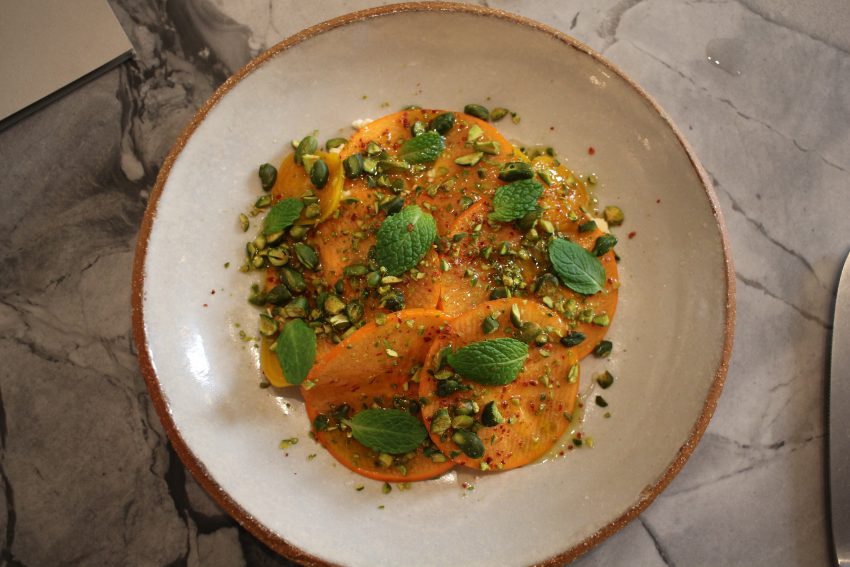 Fred’s is the sort of place you can bring your grandparents, or non-adventurous laymen who will like good food and fabulous service. It’s well-lit and the music is innocuous. The menu at Fred’s is brief and fairly classic. Seafood options include oysters, king prawns and grilled whiting; the menu constantly has a pasta and T-bone option. It’s the perfect setting to have a proper conversation with someone in a non-pretentious and yet highly professional environment. The fit-out exudes a sense of reserved luxury, with quality linen tablecloths and napkins, marble bench tops and very comfortable upholstered chairs (why is the latter so unusual? Fred’s nails it.). Clearly, there’s a gap in the market that Fred’s has filled, because it’s pretty difficult to get a booking.

I know it’s Merivale, but it still reminds me of Bert’s in the way the open kitchen is organised. They have a prep room upstairs, but once service starts, all of the cooking is observable. It’s very satisfying to watch each chef preparing a specific ingredient at their allocated stations. It’s a production line, demonstrating artistic efficiency. I sat at the bar on both visits, sharing a table top with the workspace of two chefs. One was shucking oysters, and the other was preparing the salads. Beyond them, I could see meat over a wood-fire, pans coming from the oven and pots a’stirrin’.

I ordered Danielle’s 5 course menu ($110) on my first visit. The dishes are so generous that I wouldn’t be able to fit in a wide selection (neither economically, nor stomach-capacity-wise) unless I went for the tasting menu.

A good start to any tasting menu is being brought a small surprise snack. I received a little cube of duck terrine liver with quince. It’s tasty, but not outstanding. Room for improvement, but not bad.

I accidentally ordered the Burraduc buffalo mozzarella with prosciutto ($25) in addition to the tasting menu, because I told the waiter I really wanted to try it (next minute, it comes to my table). My own fault, of course. It was brought to me at the same time as the wood oven fougasse (French version of focaccia) with butter and alto olive oil. As usual, I experiment with the bread in all combinations: fougasse with just butter; with butter and olive oil; with just oil, just prosciutto, just mozarella; then everything together. The San Daniele prosciutto was disappointing because it wasn’t very flavoursome and not salty enough. The cheese, however, was delicious and super fresh. I think they need to get more creative with the butter to turn the fougasse into an outstanding dish (e.g whipped butter). It’s warm and crusty, so I’m definitely a fan, when compared to your usual bread starter. The fougasse itself didn’t have a particularly notable flavour, though (I’d prefer it with herbs and salt). This one is more about the texture.

Snapper sashimi, crispy capers, roasted onion vinaigrette and radish was too oily for me. I don’t like it when restaurants drown sashimi in oil, because it overtakes the fish flavour. The crunch from the radish was welcome, as was the sweetness of the capers. Fred’s tell me this is their most popular entrée.

The only thing better than a salad with nuts is a salad with toasted nuts. I was told this was Danielle Alvarez’s (the head chef) favourite dish on the current menu. Danielle’s salad was also a standout dish because it had a variety of textures (from the almonds and roasted Brussels sprouts) and strong flavours (from the semi-hard sheep’s milk cheese called Pecora Mezza. And from a sherry and chardonnay vinegar paprika dressing). I make a note to buy this broad leaf rocket for my own salads, which is my new favourite green salad leaf. This rocket is from Living Earth Farm in the southern highlands.

The wood oven braised lamb shoulder, dried chilli sauce, roasted pumpkin and radicchio was not as flavoursome as I’d expected. It was impressively slow cooked, with the meat falling apart. But I thought the sauce was too bitter, especially with the radicchio. It was almost German-style to the extent that it was rich in the wrong, one-dimensional way.

Pappardelle with sage and lemon, slow roasted pork neck braised in milk was technically on point. The actual pappardelle was smooth. The milk (from The Pines Dairy in Kiama) combined surprisingly well with the slow-cooked heritage-breed Berkshire pork but the balance of acidity was slightly off. As you can see in the photo, there was also way too much butter. That would have been fine if the volume on everything else had been turned up. But for me, it’s a crime to have more butter than cheese. The sage brought much-needed flavour and crunch. Not the best pasta you’ll have, but still lovely.

Prosecco jelly, rhubarb granita, custard apple ice cream and a langue de chat biscuit was the reason I came to Fred’s on that day. I wanted to try the custard apple ice cream before they took it off the menu. It’s my favourite ice cream flavour, and it’s rarely done. Custard apples have such a limited season. The Prosecco was superb and it really served a purpose, texturally working with the granita and the ice cream. This rhubarb flavour is the best granita I’ve ever had. The biscuit was hard, flavourless, and didn’t enhance the dish.

On my second visit, I had the carpaccio of persimmon, beetroot, high valley feta, pistachio and honey ($24). The lemon, honey, mint and chilli dressing was just perfection with the crunch of the pistachios (I asked for extra pistachios as she was making the salad in front of me). The Mudgee Cheese Company feta is the nicest feta I’ve ever had. It’s so fluffy. The golden beetroot is thin and blends seamlessly with the persimmon.

Next up was the lamb leg ‘à la ficelle’ and grilled rack with mustard, bread crumbs and cime di rapa ($46). There’s a strange, bitter taste to the cime di rapa and I’m not a fan of that flavour, so I eat all of the greens first. Once that’s out of the way, I arrive at perfectly cooked lamb, with a lovely balance of rosemary and salt, and a crunchy crust. The leg underneath was tastier than the rack. Definitely not worth that price, though. And still tastes bitter from the juices that the cime di rapa was sitting in.

As with all great restaurants, Fred’s bring me a little petit four at the end of the meal. It’s a chocolate almond shortbread, and it melts in the mouth. Small, delicious and sophisticated enough with the added texture of the blanched almond on top. I also got one on my second visit, and it was just as delightful.

On my second visit, I asked for tap water at the beginning and was brought a 1L bottle of still water. I just presumed they kept their water in a nice bottle, but I should have learned my lesson by now. It turns up as an $11.50 item on my bill!!!!!!!!!! Can we remind ourselves that Coles sells 1L of MILK for $1. I refused to pay, and they reasonably accepted. I had specifically asked for tap water.

To be wowed, I need bold flavours and innovation. I didn’t exit Fred’s feeling wowed, but every single dish was made to a consistent, above-average standard. The best way to summarise the food is: fresh, seasonal and subtle flavours. Having said that, most dishes contained too much oil, and needed more seasoning, herbs and spices. It’s great for people looking for classic food, but also caters for the hearty meat-eaters. Satisfactory, but nothing that makes you crave to return.

CUSTARD APPLE ICE CREAM at FRED’s ($16) @merivale // This is my all time favourite flavour of ice cream, prematurely luring me to Sydney’s trendiest new venue, Fred’s. From fear of it leaving the menu before I got a chance to go properly, I travelled to Paddo purely for custard apple goodness. The last time I tried it at a restaurant (I usually make it myself) was inside @chefpetergilmore ‘s snow egg. Inevitably comparing the two: Fred’s has more fruit content, Peter’s was smoother. The thing about custard apple is that if you want to get a high level of flavour, you’ve gotta include more of the fruit, especially the pulp. The water content then makes your ice cream a bit icy, but it tastes amazing. Fred’s bravely picks flavour > texture. I think they’re equally important, so I enjoy both versions. This one also had a super Prosecco jelly and rhubarb granita. I could have skipped the thick, hard ‘langue de chat’ biscuit (they should just give everyone two scoops instead, or add something like a vanilla crumb). There’s an extra scoop on the plate, because I asked for more. ❤️❤️❤️❤️❤️ Service here is obvs outstanding (not just because they cater to my dietary custard apple requirements). Let the gluttony continue. #sydneyeats #sydneyfood #sydneylunch #freds #merivale #icecream #custardapple #rhubarb #granita #prosecco #sydneyicecream 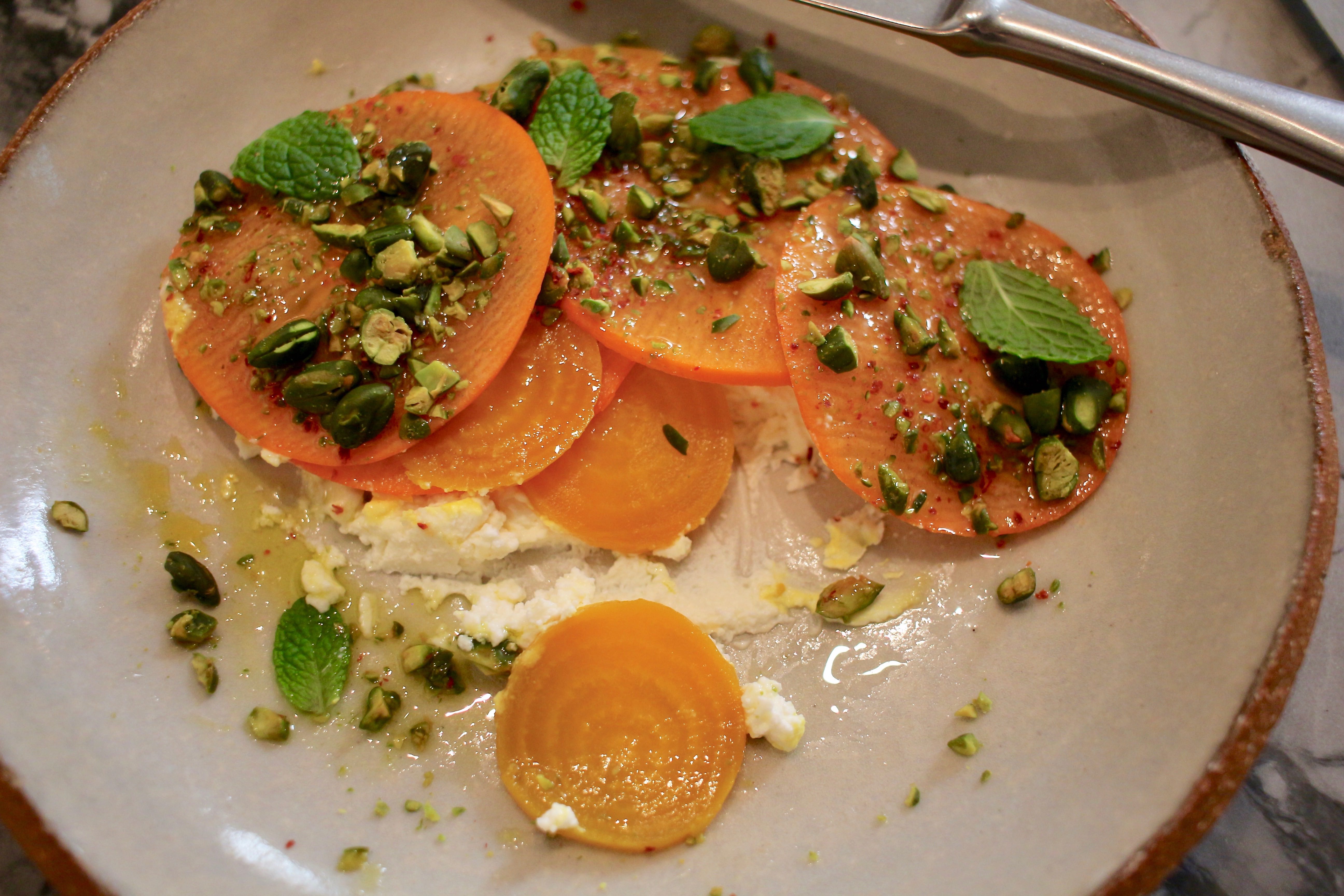 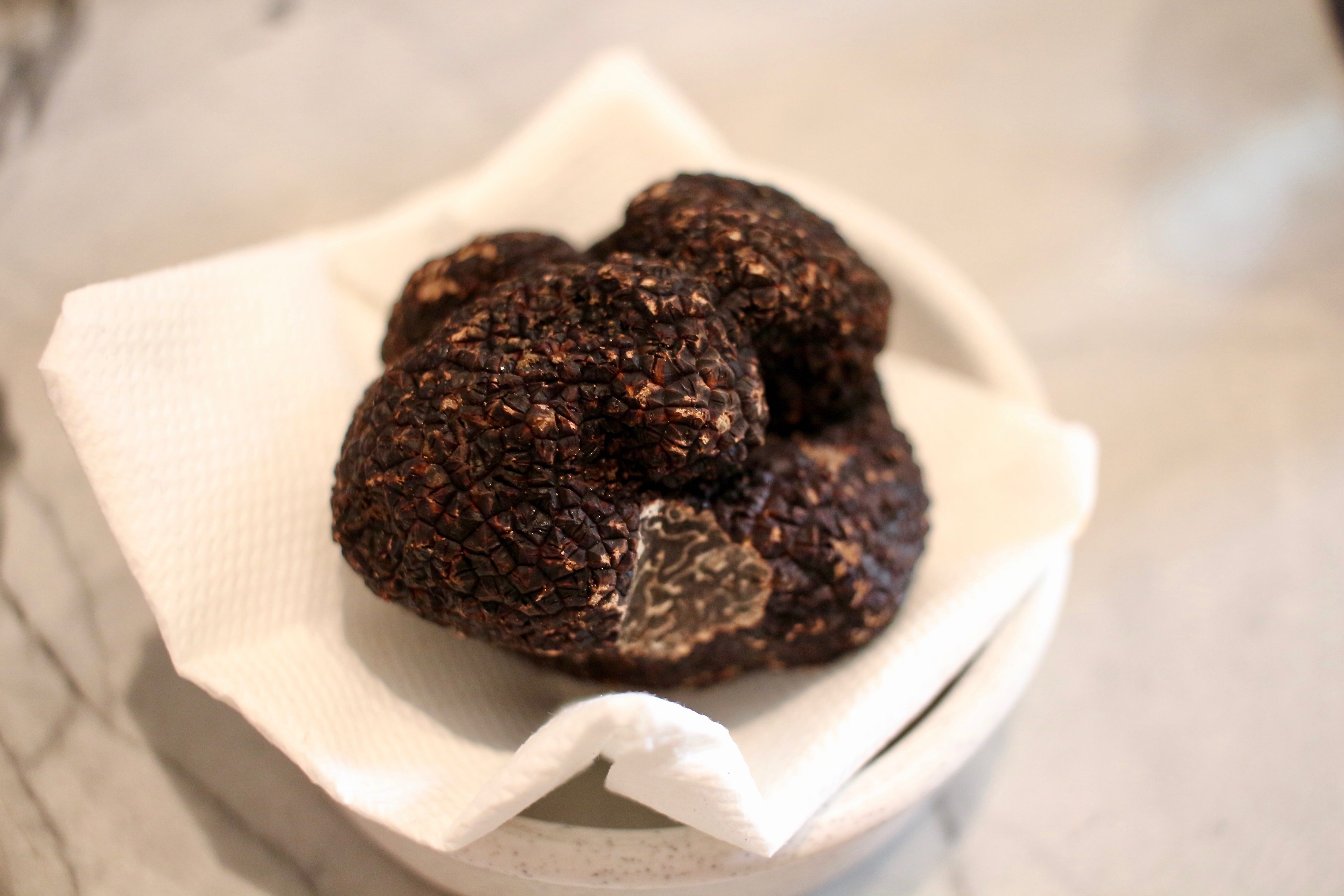 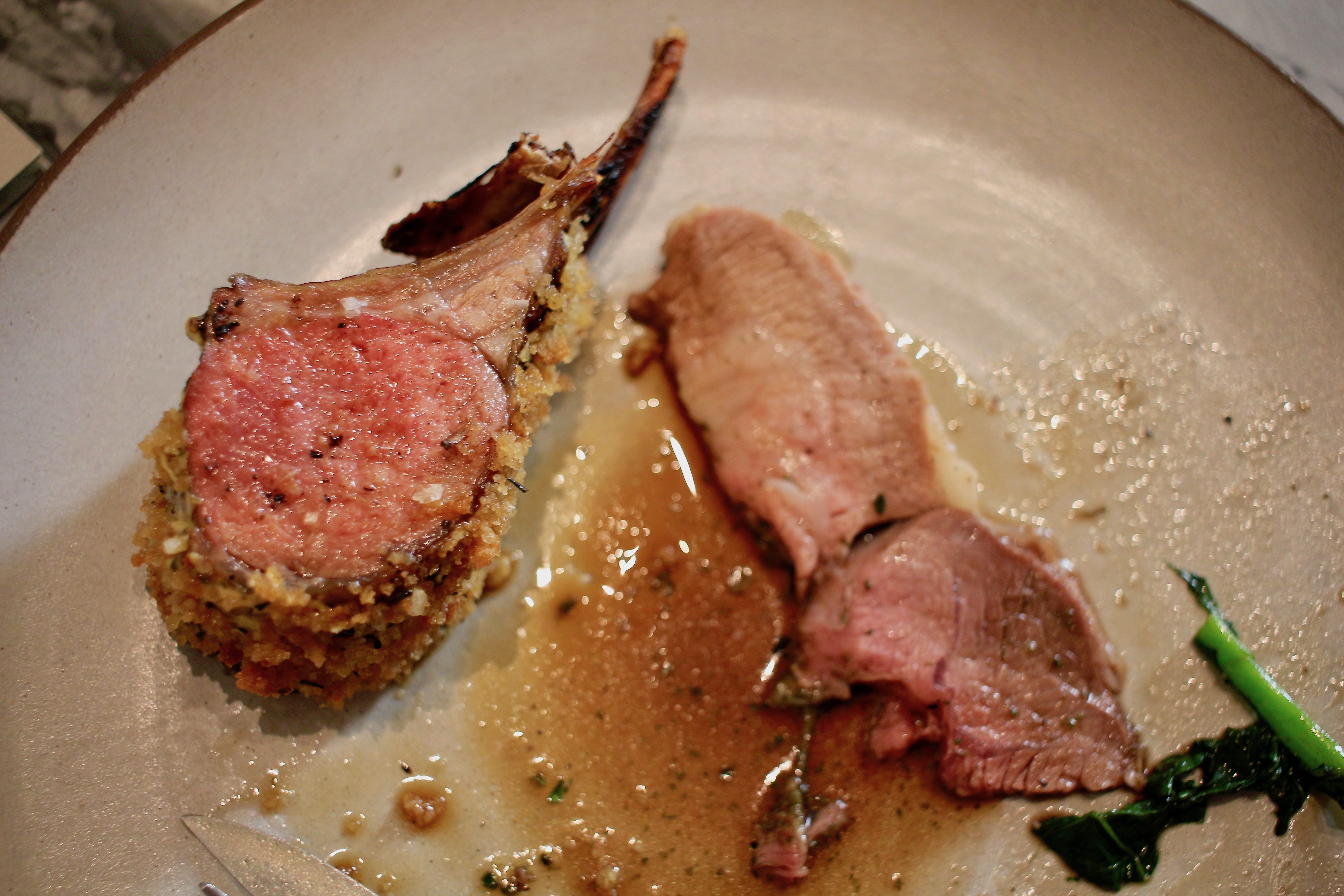 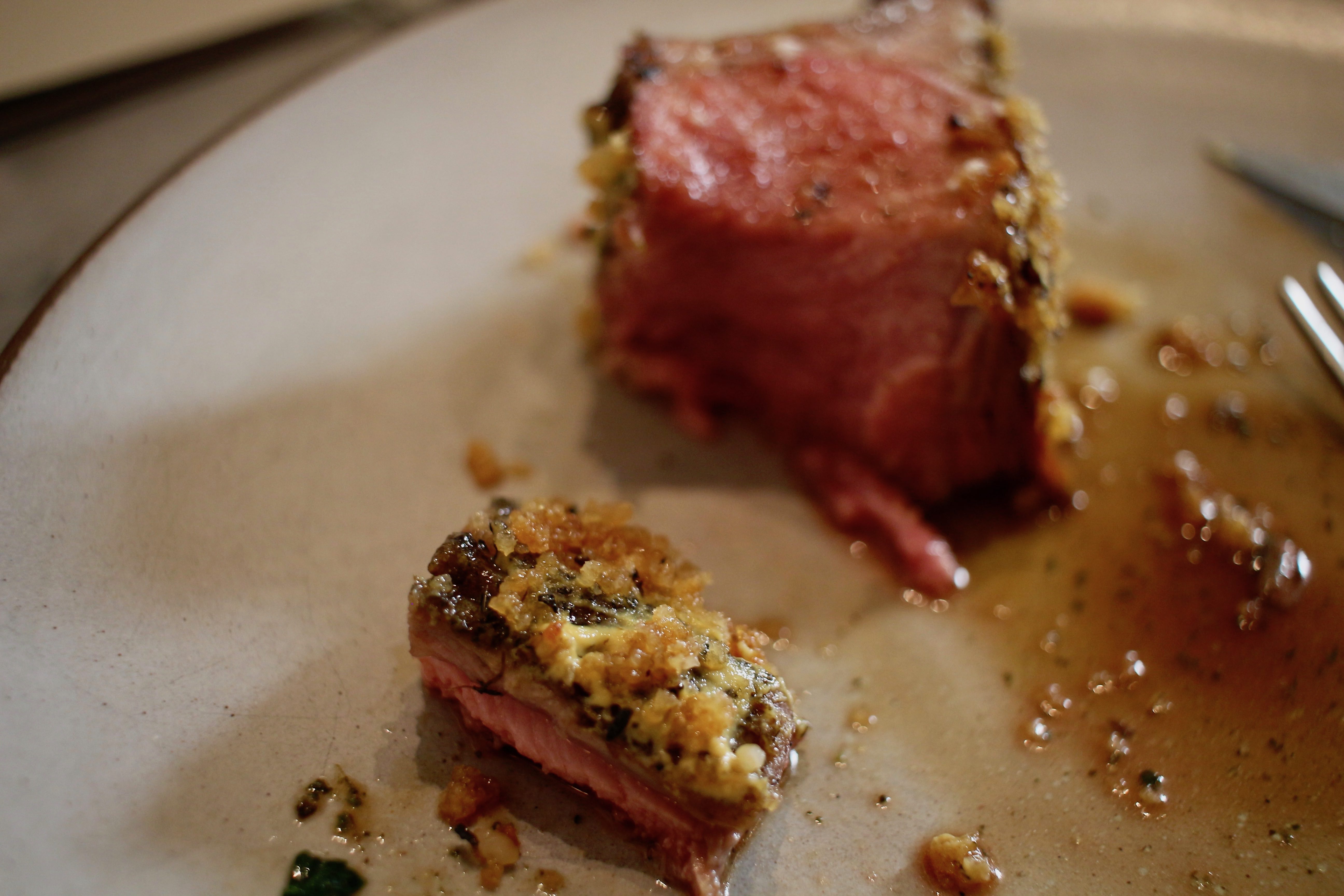