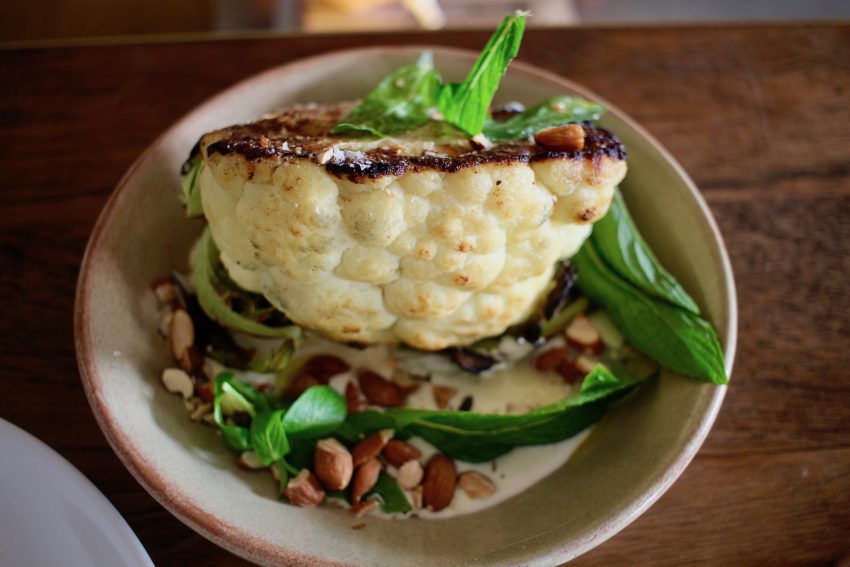 I have been back to Ester enough times to tell you that it’s definitely worth a visit.

The bar seating is pretty uncomfortable, and you have to eat and talk at an awkward angle. Luckily, the food is always good enough for me to ignore my numb leg. I like looking to my left at the open kitchen, watching food slide in and out of the wood-fired oven. They need to get hooks for women’s bags under the bar.

I’m gonna get straight into a commentary on all the dishes I’ve ordered there.

I love it when a restaurant brings out a small complimentary snack at the start of a meal. On my first visit to Ester, one of the highlights of the meal was the complementary roasted rosemary chickpeas. They were amazing and should be packeted and sold. All of my subsequent visits sadly revealed that they’ve ceased this offering. Shame!

After doing some research beforehand, as expected, the best dish was certainly the potato pasta with potato dashi (Japanese broth) and pepper leaf ($24). The broth is heavenly, and the egg yolk goes very nicely with it. The best part was the frothy, pillowy, creamy, caramelised yoghurt emulsion underneath that spectacular pasta sheet. I would come back just for this dish.

The new squid ink noodles with caramelised yoghurt and potato ($22) is a poor substitute. It’s delicious, but the noodles are crunchy, and the yoghurt is not nearly as tasty as it was in the potato pasta. It’s not a pasta dish–it’s noodles. If you can cook pasta so well, it is your social obligation to offer a pasta dish. BRING BACK THE POTATO PASTA.

I’d read so much about the blood sausage sanga ($9). It had to be ordered. I’m not a huge fan of blood sausage. For me, the sausage was a bit dry. However, the nuts in it, and the surprisingly light-as-air, creamy milk bread on which it was served lifted it to a level where I was glad I’d ordered it.

Ester’s skewers are hit and miss. I was intrigued by the sound of a daily special, a chicken meatball. It’s made by mincing chicken breast, chicken kidney fat and a small amount pork jowl mince with nutmeg and cloves. The meatball hugs a skewer and has been grilled on the habachi grill, served with a salted egg yolk sauce and a tare glaze. It was way too salty, and the yellowy, buttery glaze sat uncomfortably on the palette- almost floury. It seems Ester doesn’t do specials anymore. Good call.

The lamb intercostal ($12) was far more of a demonstration of skilled cookery, as it was fatty and juicy. You can tell it’s been left perfectly pink to stay on the right side of chewy. A small piece of pear on the side of the plate didn’t go astray, but hot mustard was too intense and overpowered the lamb. The two people on either side of me clearly thought the same and left their condiments alone.

A success was the calamari & lardo on a stick ($16). The squid ink sauce is sublime. Try wiping it up with the potato bread.

The buffalo curd pie with fermented hot sauce ($16) is nothing special. The pastry is sodden and too floury, and the cheese seizes up quickly (rather than being eaten while fully molten).

I felt neutral about the duck. It was $72. It looked huge in the photos online, but only about 60% of that was edible. A lot was bones. It was too salty and overcooked (you can see the ‘burnt’ effect has been taken too far in the pic). However, the fennel was amazing with it. The slices which included strips of fat were nice.

After having a similar twice cooked whole quail with desert oak and burnt honey ($36), I can safely say that game/poultry is not Ester’s forté. Glaze was good though. But when is glaze not good?

Leftover sourdough ice cream ($6) has it all. It’s not too sweet, has depth of flavour (caramel and vanilla) and not too icy (the balance of creamy/custardy is perf). In addition to the sourdough flavour of the ice cream, burnt leftover bits of sourdough are served as a crumb over the ice cream. They’re delightfully salty and have a coffee-like flavour. It was such a generous serving too!

I’ve been back for that ice cream three times. MASSIVE CAVEAT on the third visit: currently on the menu is a new version which is not nearly as good. The beautiful sourdough crumb has been oddly replaced with dates and buckwheat, and the ice cream no longer has a smooth and creamy texture. Still good, but VERY different to the old version. Your call.

The wood fired custard tart ($9) is not as worthwhile as the ice cream. It’s chewy and burnt to the extent that the custard isn’t smooth, and very eggy.

The burnt pav ($16) has the perfect meringue ratios for me, which involves a thin crust and a soft, marshmallow centre. Best of all it wasn’t too sweet, and combined passionfruit, hazelnut and a glorious tea flavour (I thought it was Bergamot, but after asking the waiter it turns out to be Jasmine tea).

I have been back to Ester four times for the fermented potato bread with trout roe, dashi jelly and kefir cream ($22). Those condiments are so delicious. The actual bread is pretty doughy and undercooked on the inside (it compresses under its own weight so that once you pull off a bit, it stays in that shape and won’t bounce back against your touch). I notice they once served it with bone marrow, and if they put that back on the menu, I’ll return again.

You should definitely try the fried Jerusalem artichoke. It will only set you back $8, which I’d pay just to get some of that egg butter that accompanies it (which tasted like custard) to melt onto my potato bread. It’s the consistency of a fluffy baked potato (like an artichoke purée ball) covered in tempura (a light batter).

For vegetarians, the half cauliflower, almond and mint ($15) dish is the go-to. It’s essentially a healthy version of cauliflower cheese, asserting itself in a thin white sauce. I adore the slightly salty, roasted almonds. The unusual generosity with the mint is a successful demonstration of confident cooking, as there are enough leaves to freshen each mouthful.

The pumpkin with pumpkin seeds and kombu oil ($18) is the prettiest pumpkin dish I’ve ever eaten. I am still unsure about whether I liked it. I don’t think I’d order it again because the pumpkin was undercooked (intentionally). It was served in thin ribbons and was slightly crunchy. It tasted like the stringy bits of a pumpkin (starchy, rather than soft and sweet like a roasted butternut). The crunch from the pumpkin seeds was nice, but again, they tasted too much like pumpkin seeds (bland; pure fibre) and not enough like pepitas. Maybe this is an issue with cooking pumpkin too quickly, too hot, rather than at a moderate heat, slowly. Potentially not a good veg to put in a wood-fire oven. What I loved was the purée underneath, heroed by the kombu oil.

I came once with a friend purely to satisfy late night dessert cravings, and I recommend you do the same. Ester is officially the King of Potato. I’m waiting for them to do fries.

Ester is located 46–52 Meagher Street, Chippendale. Street parking can be difficult so look for a parking lot. 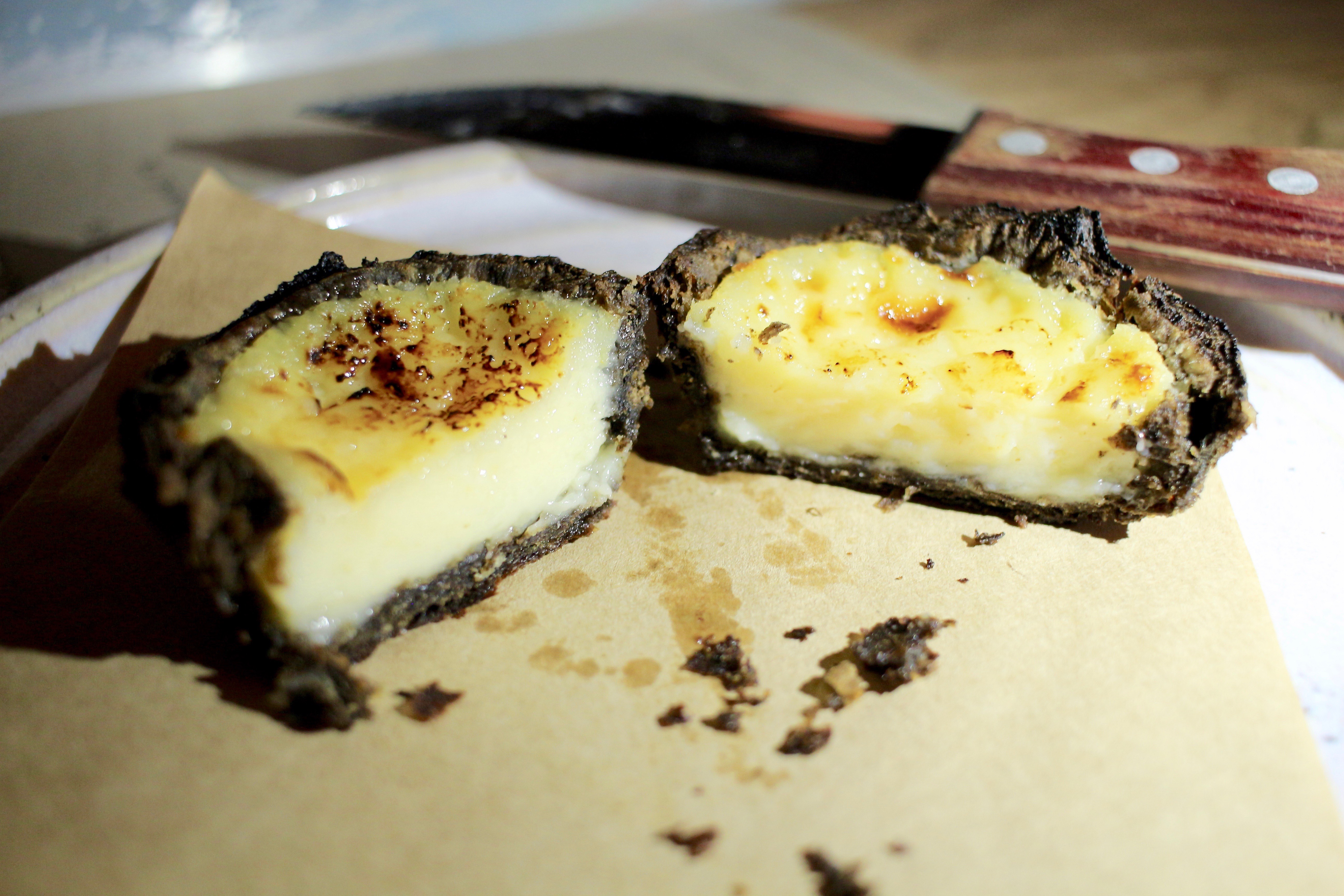 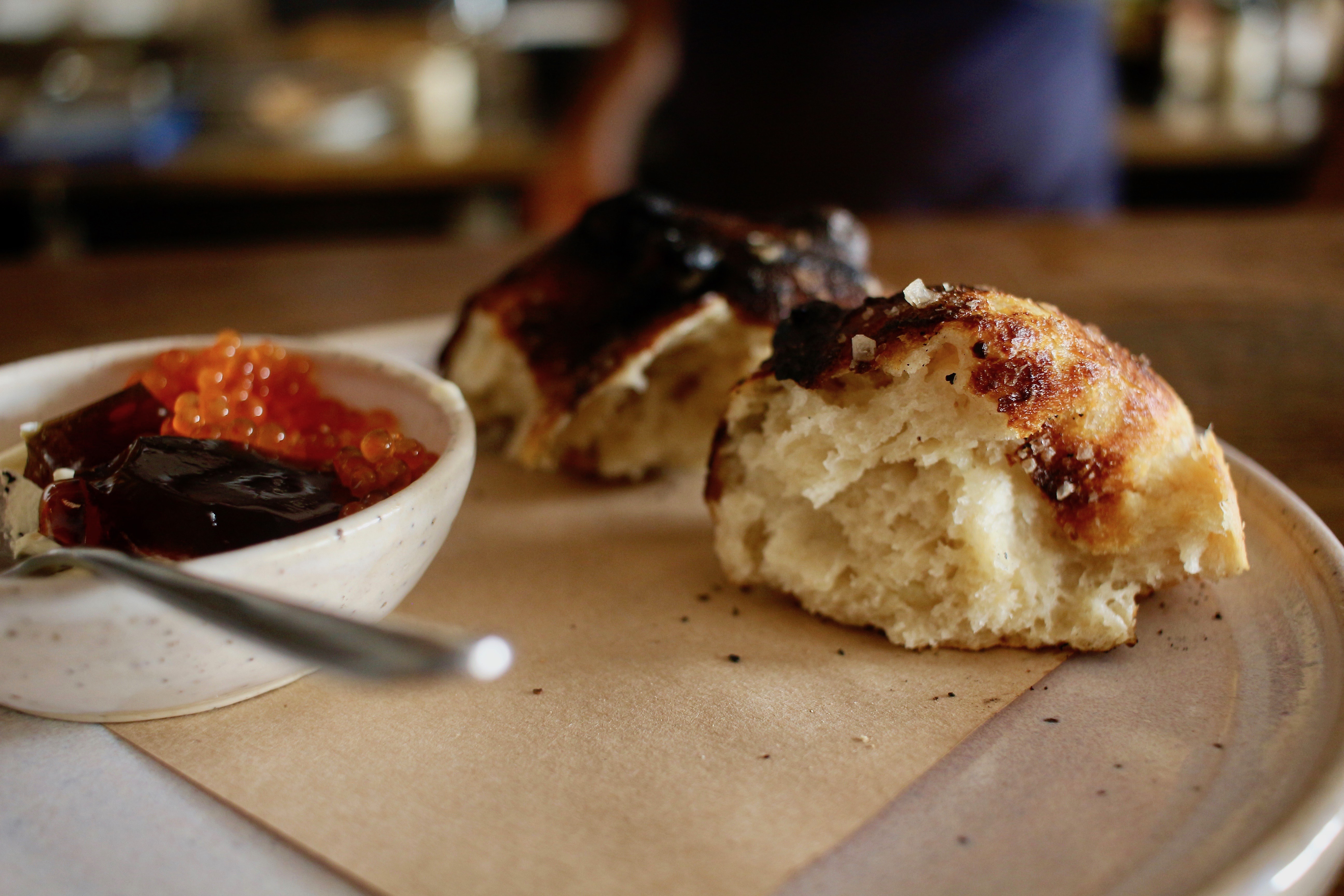 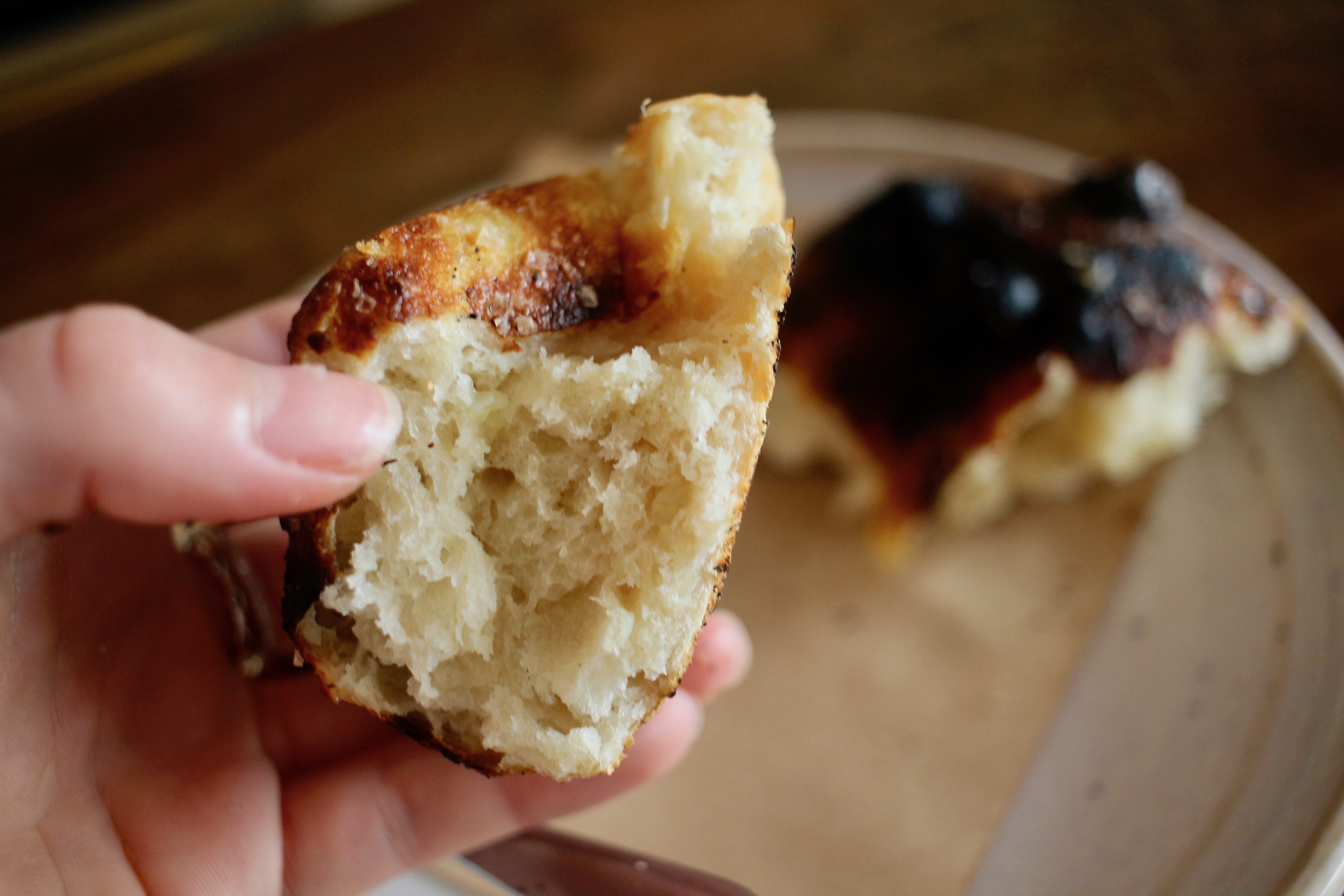 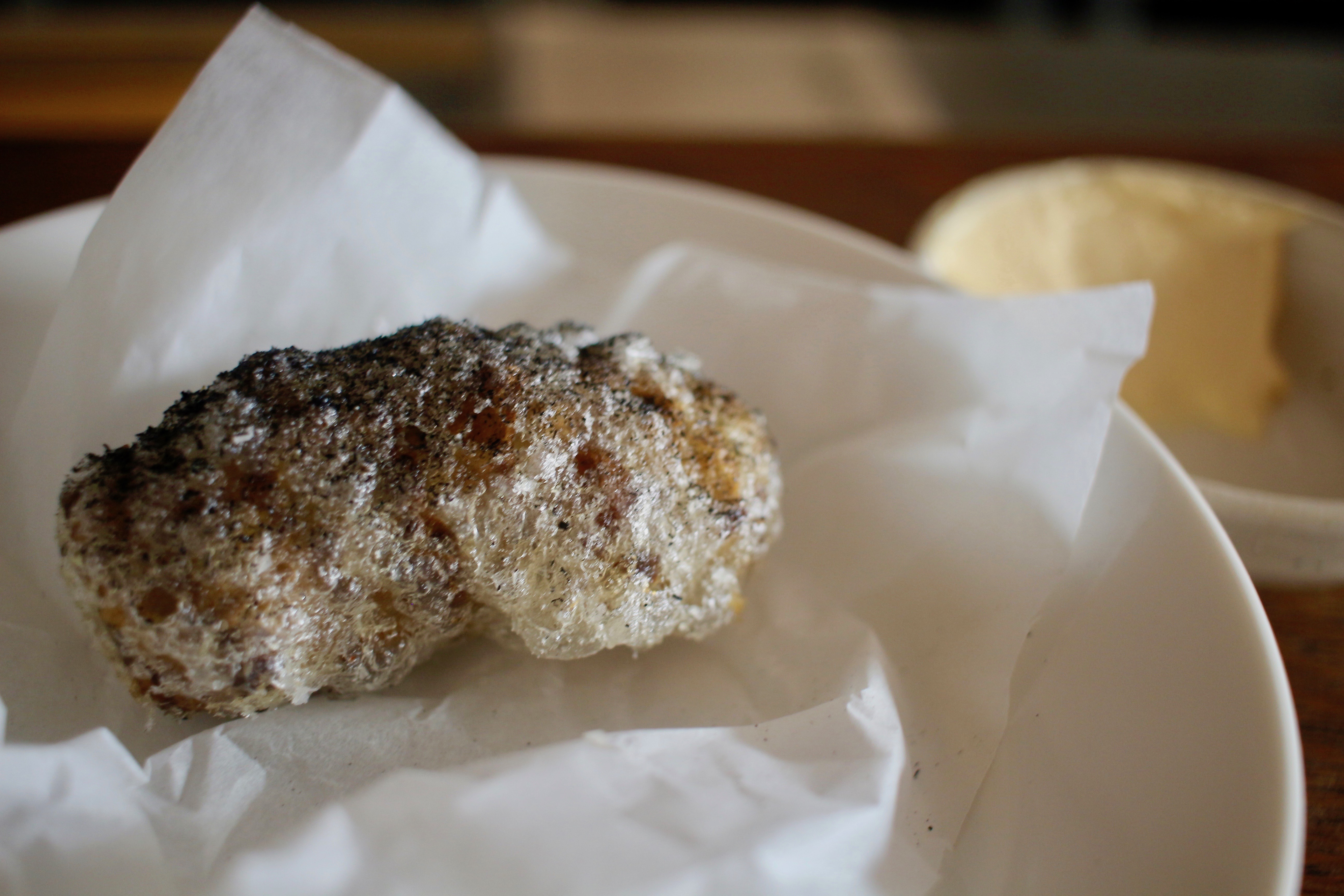 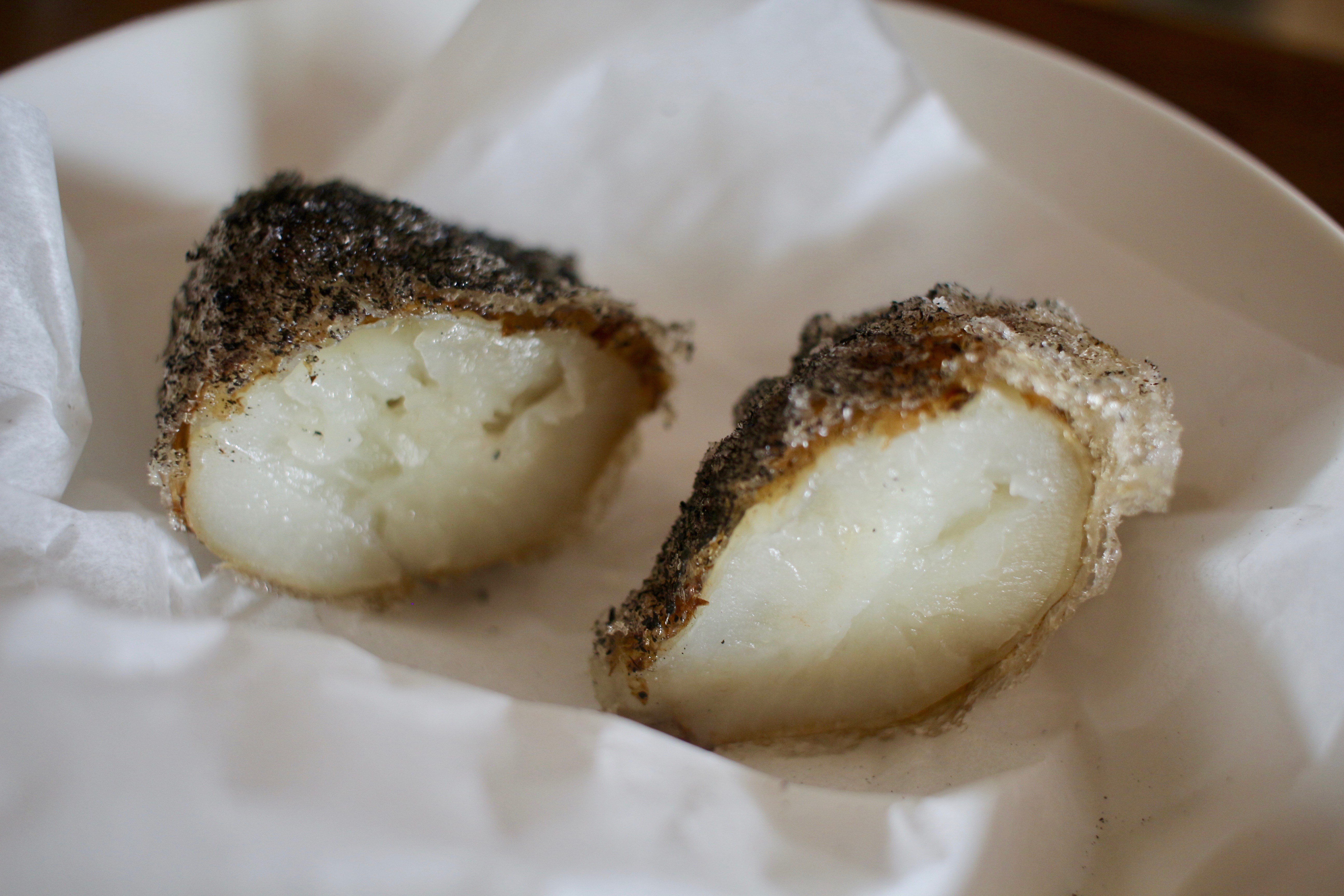 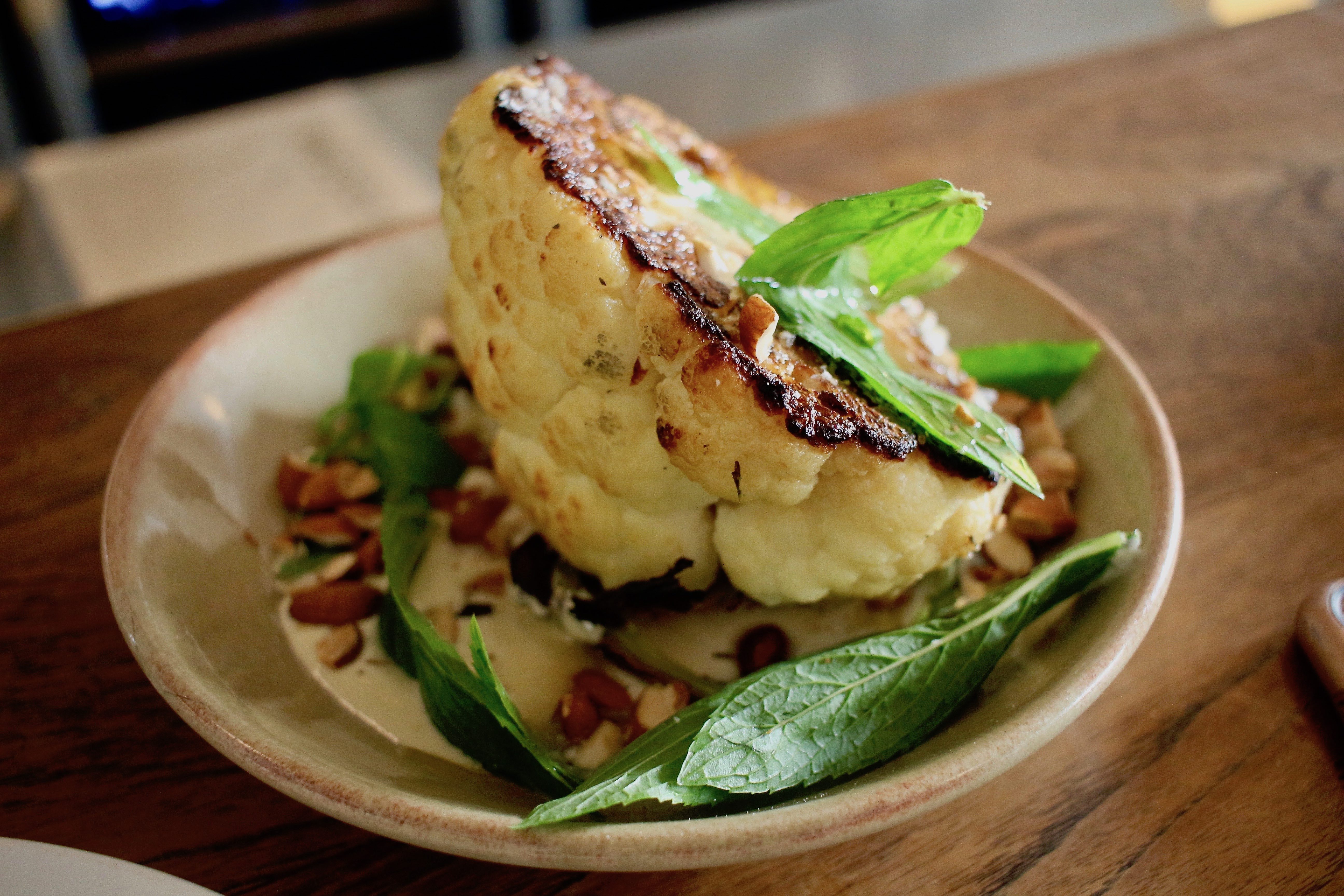 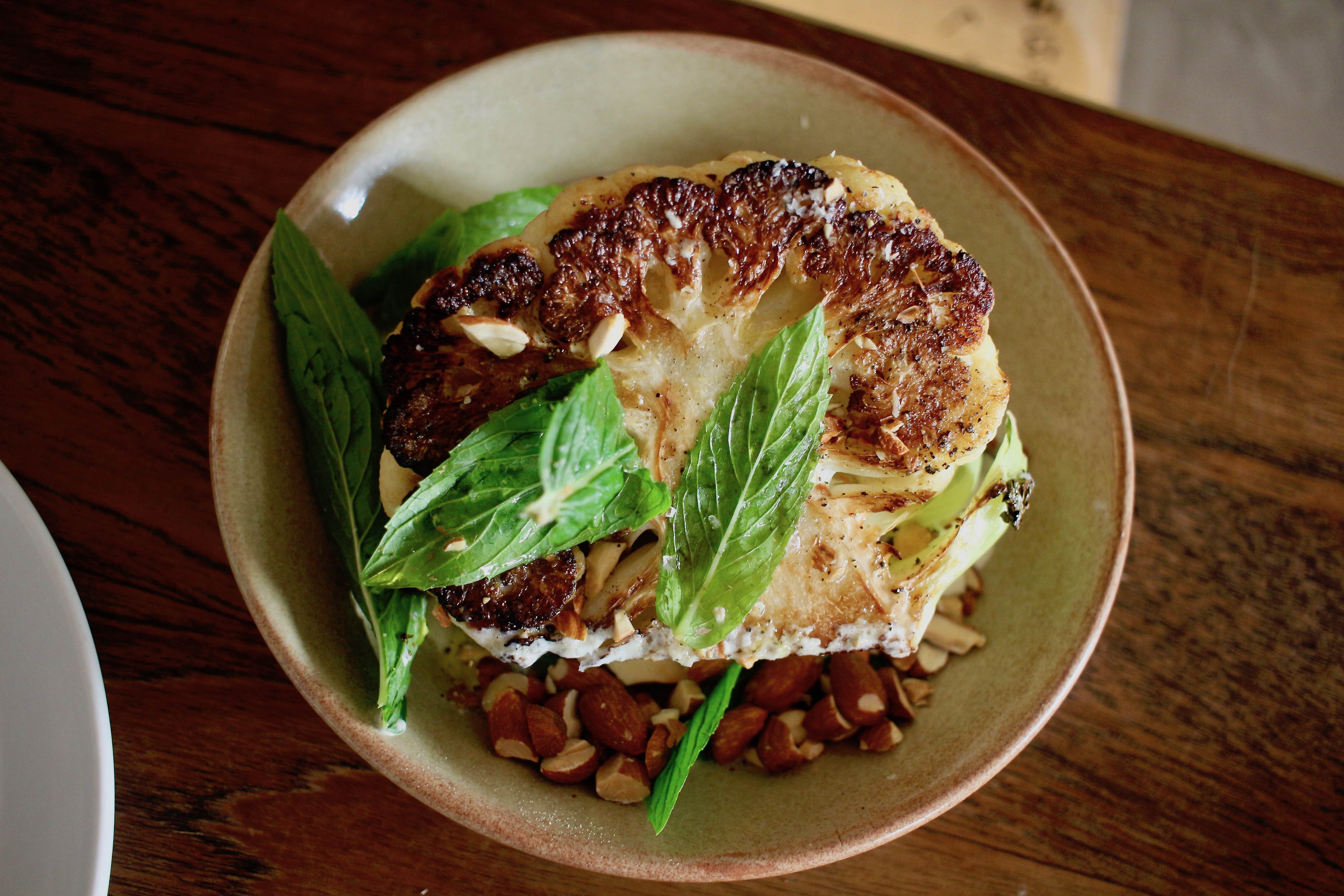 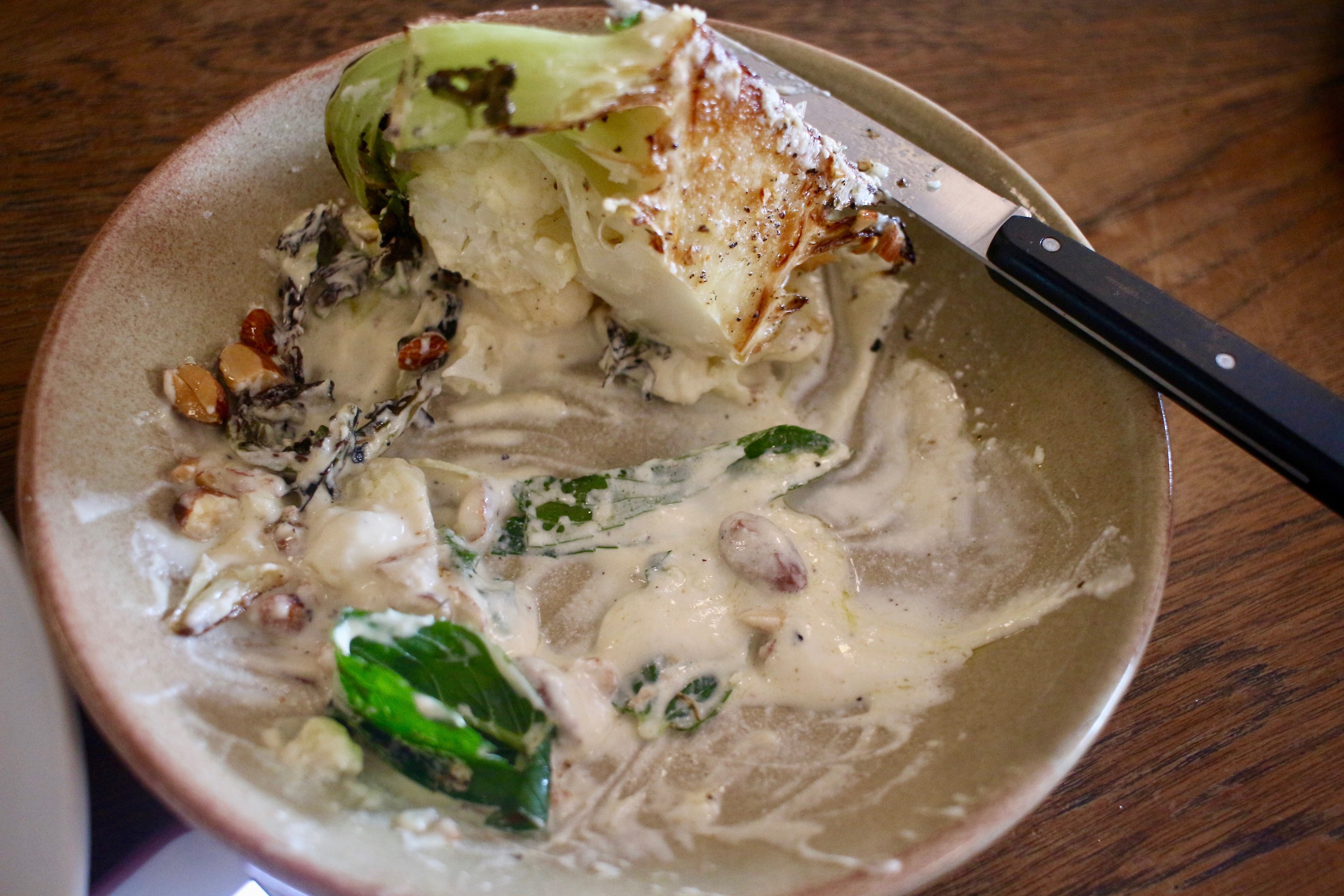 I’ve been to @ester_au three times just this month. Love it, although it can be a bit hit and miss. But in general it’s always reasonably priced, warm and serves good quality wood-fired food. 1️⃣Buffalo curd pie ($16) with fermented hot sauce was nice, but I wouldn’t order it again. The pastry was very soggy and dense. 2️⃣Lamb intercostal ($12) was melt-in-the-mouth good. It was hardly cooked and very juicy, which was perfect because otherwise it would go tough. Didn’t go with hot mustard but was nice with the little slice of (what I think was) pear on the side. #sydneyfood #sydneyeats #ester #lamb #buffalo 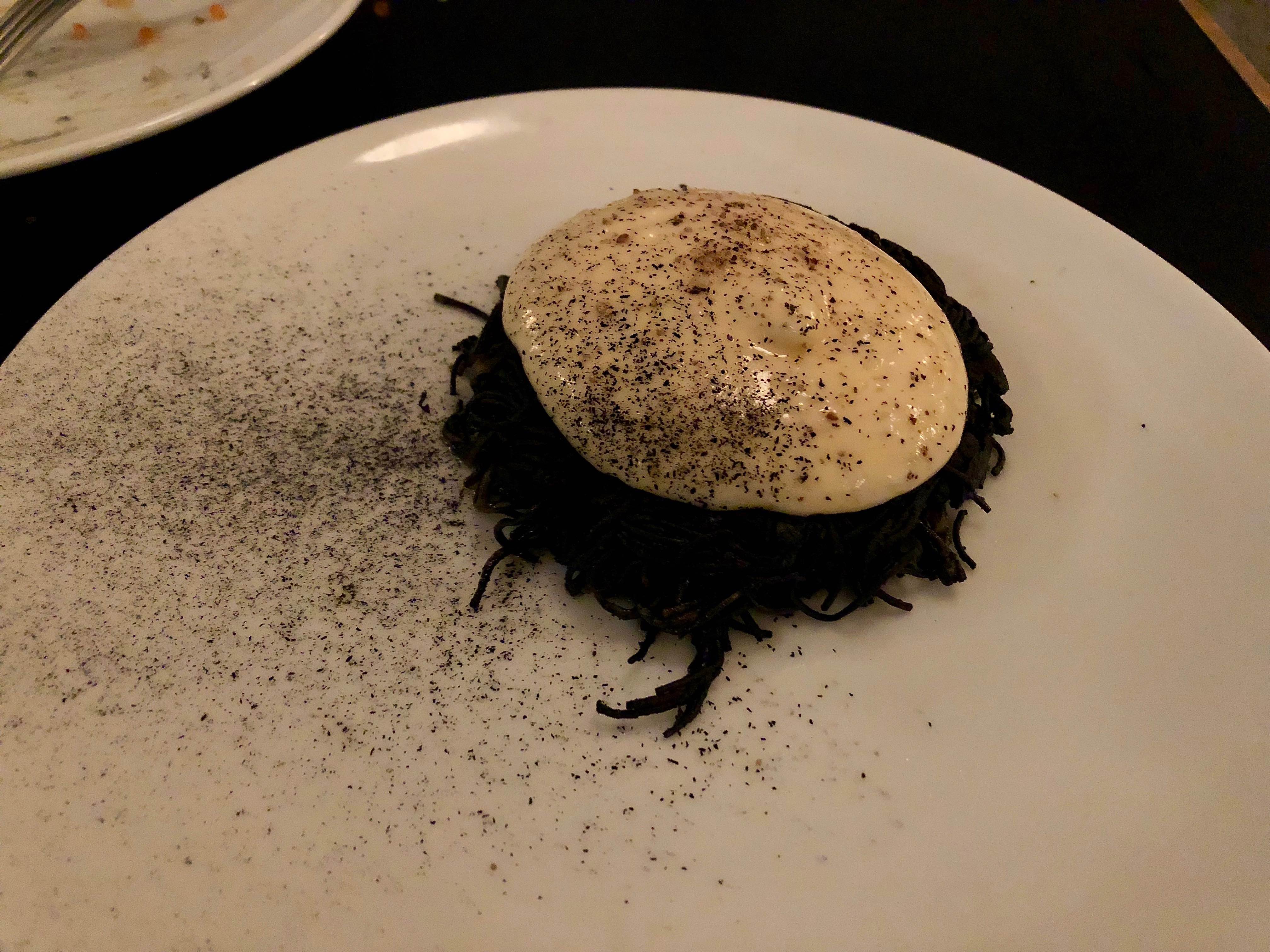 @ester_au 1️⃣&2️⃣ I was disappointed because their online menu had promised me a suckling pig, we ordered its replacement- duck. I feel neutral about this duck. It was $72. It looked huge in the photos online, but only about 60% of that was edible. A lot was bones. It was also slightly too salty. However, the fennel was amazing with it. The bits with strips of fat were delicious. Overall, it was overcooked and too burnt to nibble at. There is neither love, nor hate, here. I am never going to be dissatisfied with decently tasty duck. 3️⃣ I’d read so much about the blood sausage sanga, it had to be ordered. I’m not a huge fan of blood sausage. For me, the sausage was a bit dry. However, the nuts in it, and the surprisingly light-as-air, creamy milk bread on which it was served lifted it to a level where I was glad I’d ordered it. 4️⃣The chicken meatball is made by mincing chicken breast, chicken kidney fat and a small amount pork jowl mince with nutmeg and cloves. It’s shaped around a skewer and grilled on the Habachi grill. It is served with a salted egg yolk sauce and a Tare glaze. The waiter listed the specials, and I was taken by the sounds of what turned out to be a fancy description for a chicken meatball. My friend and I were unsure about this one, and could have given it a miss. It was WAY too salty, and the yellowy, buttery puree it was served with just sat oddly on the palette- almost floury. ////// Ester is definitely worth a visit for that Potato pasta (see my previous post). I also HAVE to go back to try their famous burnt pav and three milks dessert. However, it’s worth making a comment about Ester’s seating arrangements. It was booked up on the night when I visited, so I gratefully accepted the last booking for bar seating. As I looked around, at least half the diners looked uncomfortable (although they were enjoying their food). There were round tables, combined with chair and bench seating, which meant parties of three or more were leaning at strange angles to chat. You know the food is good when people will put up with this. #ester #esterrestaurant #sydneyeats #sydneyfood

@ester_au appreciation. These little babies deserve their own post. Crunchy chickpeas with salt and rosemary served complementary at the beginning of your meal. And they sure know a way to a girl’s heart- they offered us a top up! It was hard to resist and not spoil your appetite. As @garymehigan from Masterchef would say, box em up and sell em! • • • #chickpeas #ester #esterrestaurant #sydneyeats #sydneybesteats #sydneybestrestaurants #rosemary

The best VALUE ice cream in Sydney I’ve ever come across ($6) from @ester_au // ‘Leftover sourdough ice cream’ has it all- crunch from leftover crust which has a coffee-like flavour; not too sweet; depth of flavour with caramel and vanilla vibes and not too icy (the balance of creamy/custardy and consistency are my most important factors for ice cream). It was such a generous serving too! #sydneyfood #sydneyeats #sydneyicecream #sourdough #icecream

Calamari and lardo on a stick ($16) is one of my favourite ever dishes at @ester_au The squid ink sauce is to die for. Why don’t we see this combo more often? Cured strips of fatback and calamari is my kinda skewer. #sydneymeat #calamari #lardo #skewer #esterrestaurant #sydneyeats #sydneyfood