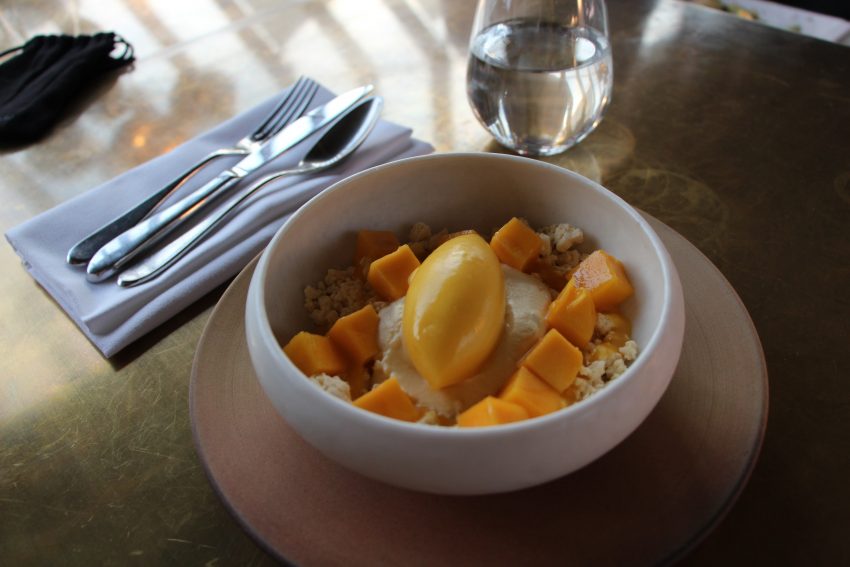 Where flavour greets art as an equal.

The Cured and Cultured bar at Bennelong is magnificent. On my first ever visit, it was a Sunday evening and not too busy. Greeted by a 180-degree vista of Circular Quay, you immediately feel as classy as you’d hoped, considering you’re docking your stomach and co inside an Opera House sail.

The bar sits inside and above the restaurant. Here you can get a dish for $5–$36, whereas in the restaurant you’re restricted, at the least, to two courses for $100. This is the cheat’s (cheapskate’s) way of sampling some of the dishes offered in the restaurant, as there is a high degree of crossover between the menus.

In the centre of the circular bar you can watch the chef’s preparing some small dishes; they were very friendly and simultaneously unobtrusive.

Bennelong’s aesthetic is touristically Australian; with Aboriginal art, didgeridoos and native-style sculptures on display. The lighting here is perfect, welcoming in the outside world from inward-facing glass that stretches between the white sails.

Chestnut and truffle arancini are not always on the menu, but are worth your $7. Definitely preferable to any other arancini that I’ve eaten because rather than being coated in breadcrumbs, they’re speckled with puffed wild rice.

The salad of smoked eggplant, crisp falafel, pistachio nuts, currants, labane (their spelling) and house made pita bread ($22) is sensational. I order it every time I visit. Pita is the warm hero who sweeps me off my feet and into a sweet, rich and crunchy heaven. Gilmore is generous on the nuts. Tick.

Twice baked goats cheese soufflé with roasted hazelnut crumble ($22) is likewise all about that crunch. I love how the waiter pours the liquid cheese over the soufflé ‘live’ in front of me. The soufflé is piping hot, so the cheese dwells in this delightful molten state. In the same way it that it sold me on the arancini, the puffed rice champions this dish.

A pre-cut suckling pig sausage roll with black garlic ($24) is the only disappointing dish on the menu I’ve tried. It’s only because it’s called a sausage roll, which makes you expect a juicy, flavoursome Aussie classic. This version is dry. The black garlic disturbingly resembles Vegemite and may distress some tourists.

Mooloolaba Yellowfin tuna with kohlrabi rémoulade, anchovy emulsion, black rice & laver crisps ($28) is not as rich as the others, but it ticks all the same boxes.

As declared all over this website, Bennelong is my favourite restaurant. No one beats Peter Gilmore and his desserts. All his desserts at the bar cost $28. That $28 is my benchmark for every review I do. I think, “how many Peter Gilmore desserts could I buy instead of what I’m currently eating?”

Cherry jam lamington arrives on the bar so sublime it’s actually undergoing sublimation. Frost runs up and over the bowl from the ‘coconut’ mousse shavings frozen using liquid nitrogen. Unlike a normal lamington, the coconut shards become the hero, and are the bed for a chocolate-glazed sponge. Underneath is a prism of cherry ice cream, cherry jam and ganache. I’m not a fan of cherry in desserts, but this just worked so well and wasn’t nearly as rich as it looked. I must admit, I had been hoping that there was a layer somewhere in that bowl similar to the mind-blowing custard underneath Gilmore’s ‘Snow Egg’.

Five textures of Queensland mango includes a mango sorbet (which wasn’t too sweet), ripe mango cubes and mango mousse. They all combine so well that the varying textures of coolness, creaminess and crunch send you into a daydream. You must force all of your tourist visitors to try this (although it’s not always on the menu. Damn those seasons.).

Chocolate cake from across the water is self-reflexively named after an identical dessert served at Gilmore’s other restaurant, Quay, which is literally located across the water in Circular Quay. It must be one of Gilmore’s most popular desserts. I’ve eaten it at both restaurants. They are less generous on this side of the water with the perfectly-tempered chocolate that is poured over the cake and melts through the thin top layer (I’ve had it three times at Bennelong. Every time, I want them to leave me that copper pot of melted choc.). The mousse was also slightly less generous than at Quay. Sometimes, the Bennelong version comes straight out of the fridge–rock hard.

Peter Gilmore’s food is the highest standard I’ve ever come across. No wonder he has been named chef of the year by good food for 2019. It’s all because of three factors: texture, volume and balance of flavour. Each bite is bafflingly packed with flavour. It’s like a magic trick. The ratios are absolutely spot on. Nothing is too sweet. You’ve got emulsions, crunches, creams, garnishes and proteins all competing equally on the tongue. If you stop to savour each bite, this is the sort of food that converts a functional eater into a foodie. You are forced to wonder what you’re eating.

Come for a date; bring a tourist; come for drinks. I once visited during my lunch break at work. This restaurant will wow you.

Bennelong is located at Bennelong Point inside the Sydney Opera House. Walk up the stairs of the Opera House from the end of Macquarie Street and it’s inside the first sail on your left. You can also enter the restaurant internally coming up from the forecourt. 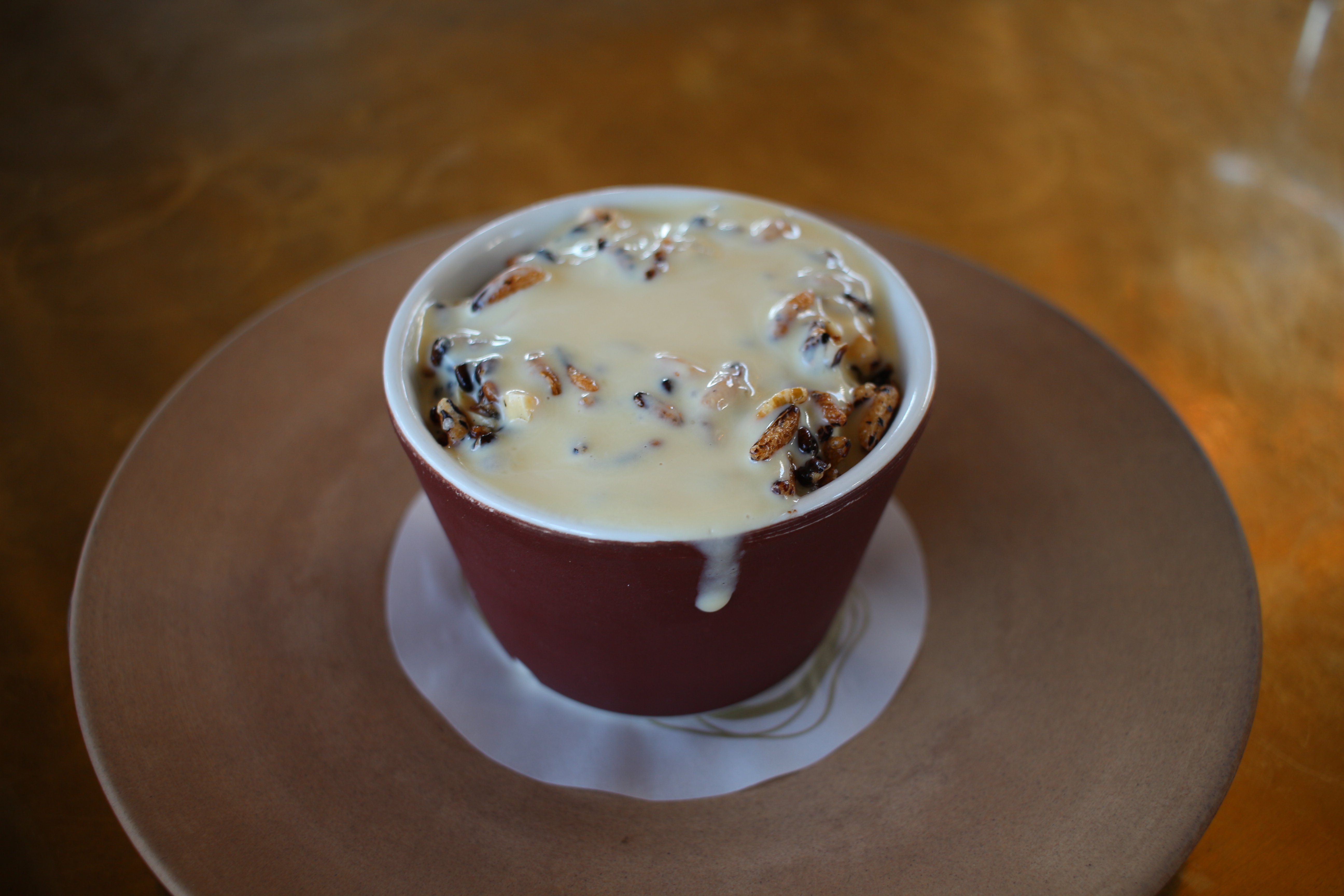 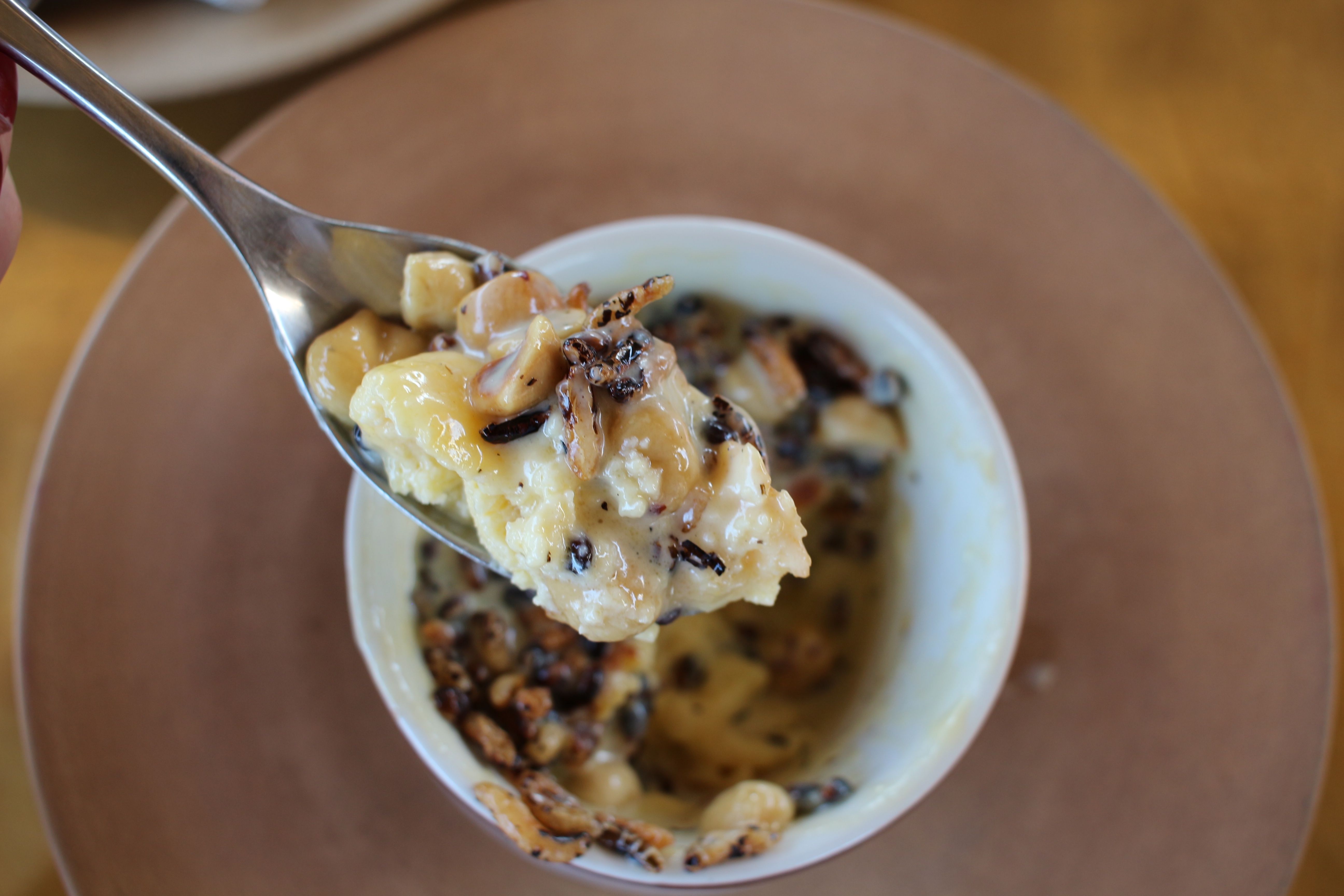 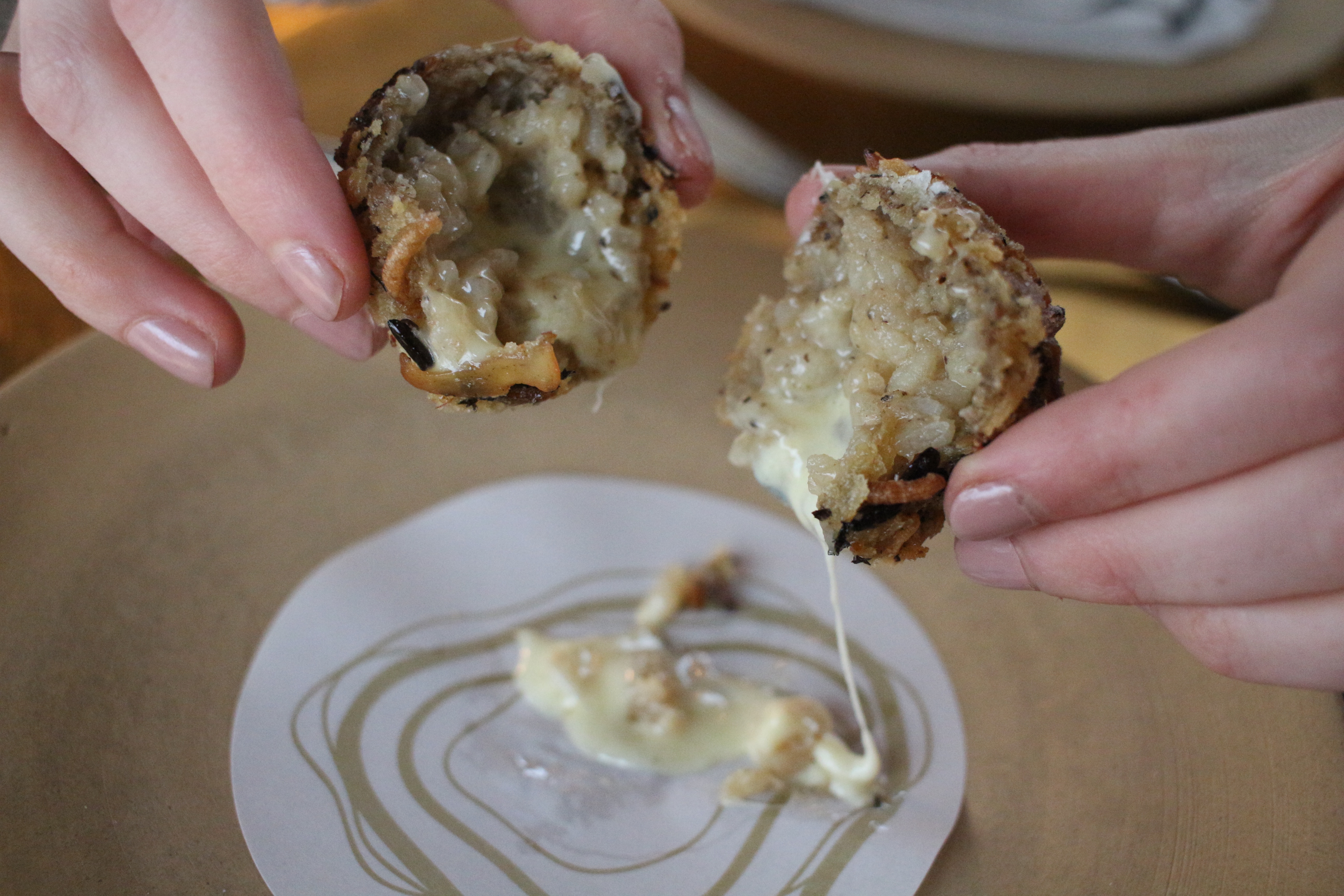 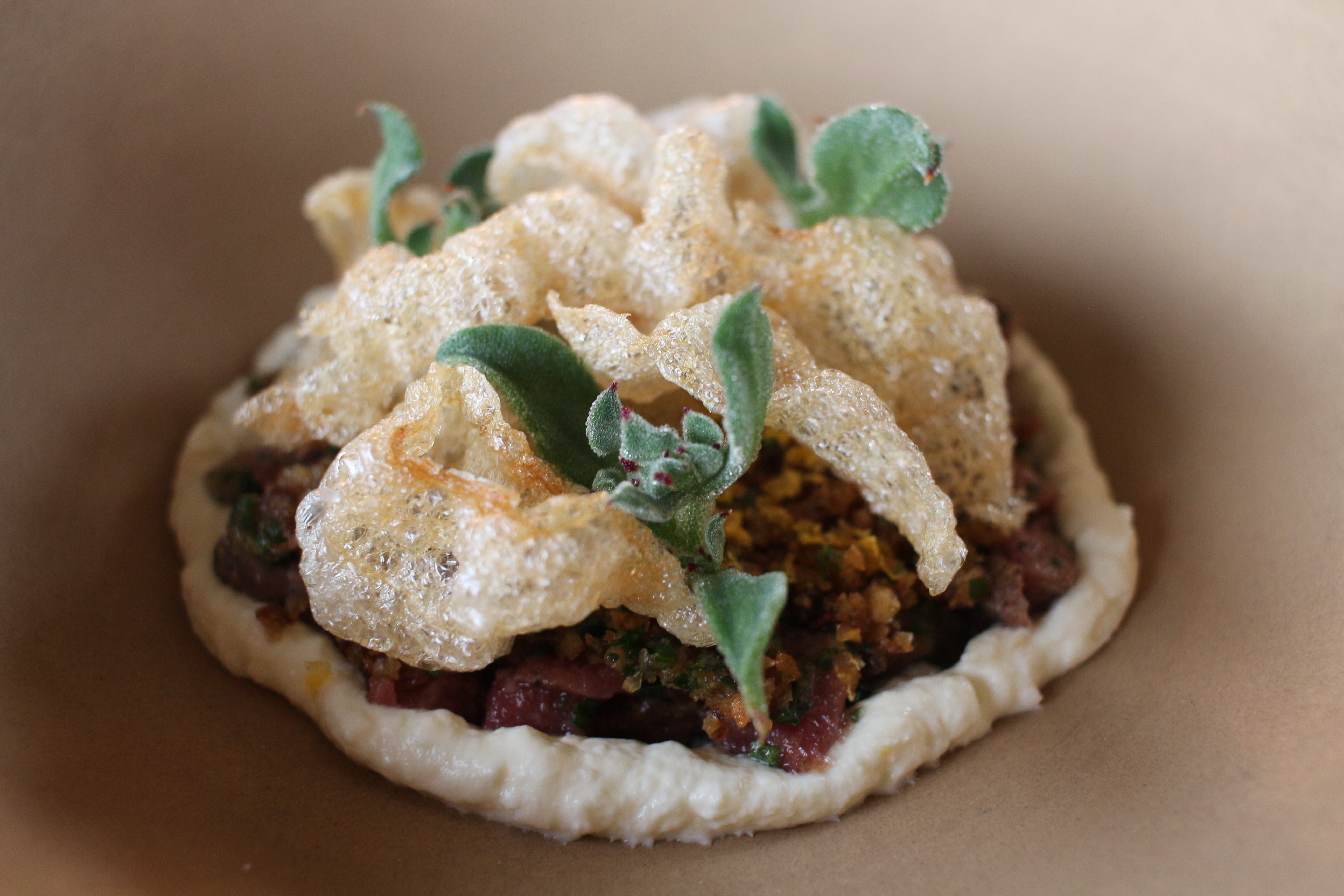 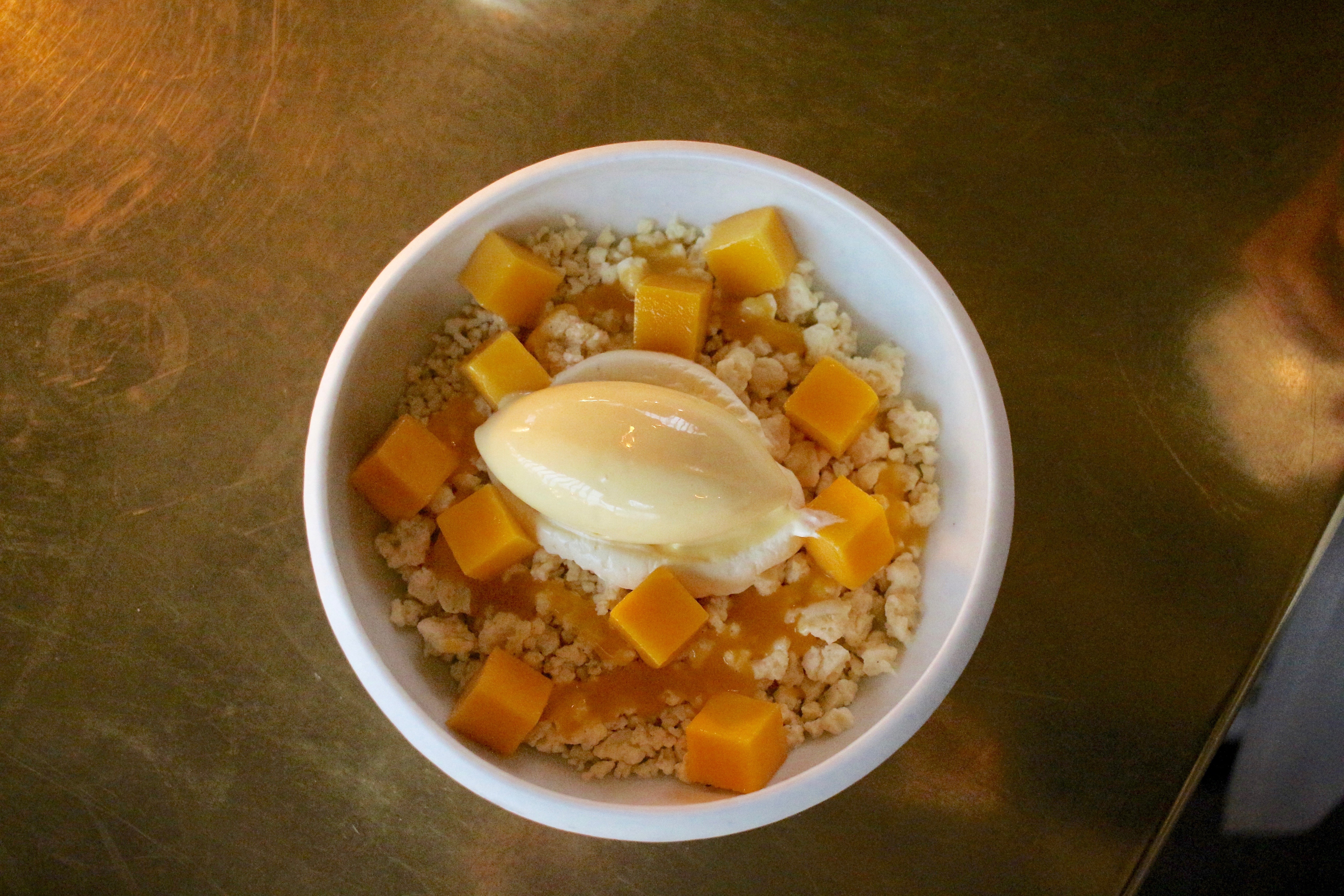 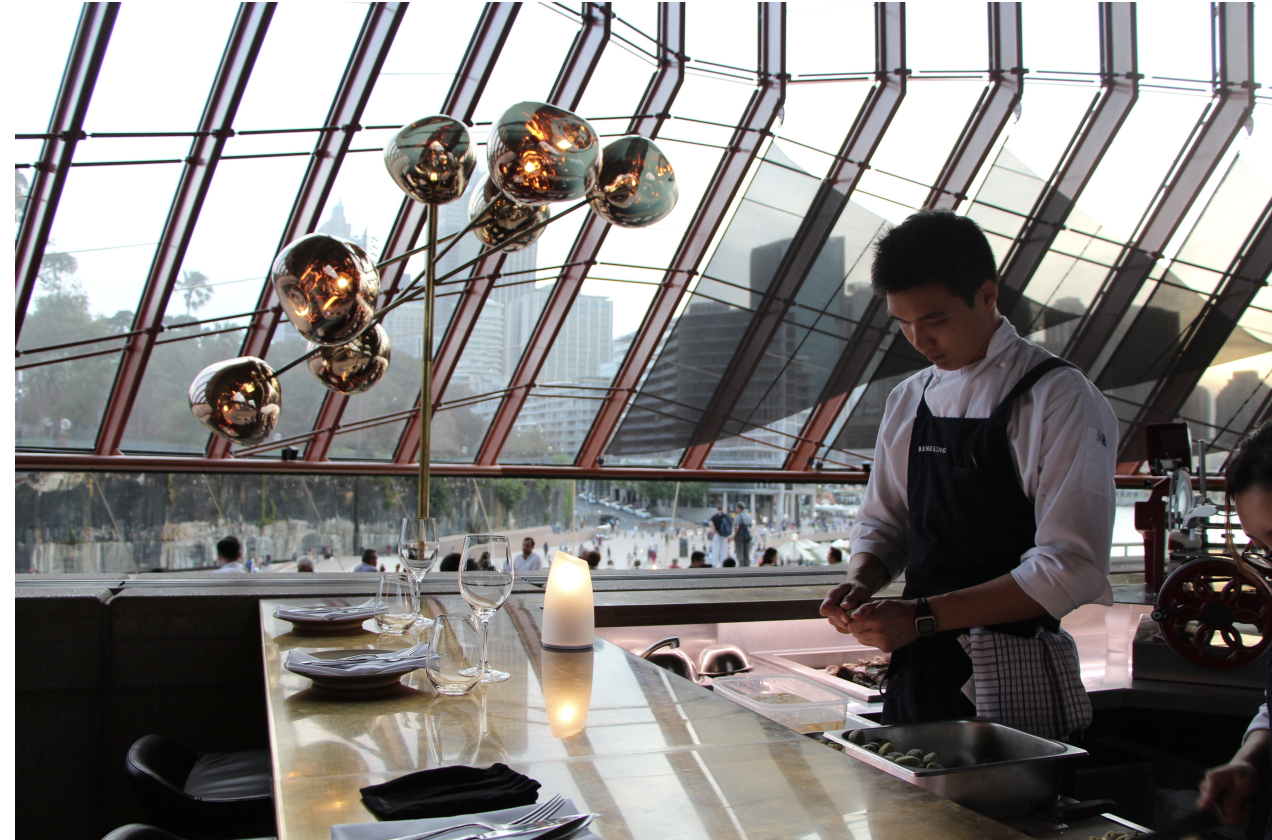 Suckling pig sausage roll with black garlic ($24) @bennelong_sydney // Don’t get me wrong, Bennelong is in my top three all-round restaurants in Sydney. Peter Gilmore is one of the best, so my criticisms are all relative. I’d say I was a little disappointed by this one because the pork was so dry and not very flavoursome. Just wouldn’t be my first port of call on the amazing menu at Cured & Cultured. #sausageroll #bennelongrestaurant #petergilmore #sucklingpig #sydneyfood #sydneyeats