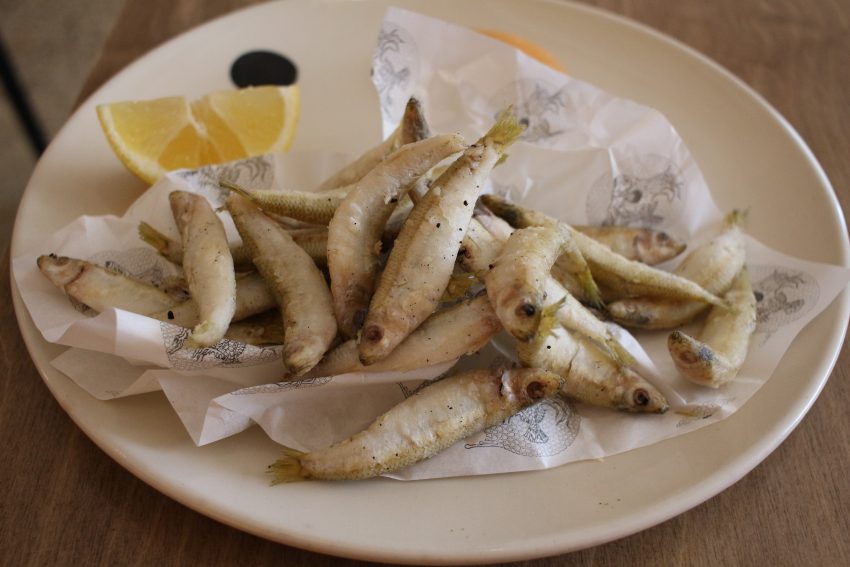 Fish to the fullest.

MUST ORDER Anything with a cracker/chip/muffin/crumpet; anything with batter; anything with crispy fish skin; raw tuna
VALUE 8/10
AMBIANCE Eat ’n’ run; get to know your neighbour’s bum
SERVICE Great
WOULD I GO BACK? Rhetorical question. Could eat here every day

Upon entering this narrow prism of a mini restaurant (seats 34 people), I was greeted by friendly and attentive faces. It is not possible to seat yourself, or arise, without some bottom-to-face interaction with your neighbour. There’s barely a hip-width’s distance between the tables along the side with the leather pew (this is a shrine to fish kind). Although the only source of natural light is from the windowed wall at the entrance to the restaurant, the tables back near the kitchen are well lit. Like the exposed-brick walls, there’s nowhere for flavour to hide. It’s all about the food. And the fish. When you walk past along Oxford street, you’ll notice it’s usually booked out. You feel like the space is about to burst, so a claustrophobic or considerate diner (sympathetic to the business) feels a bit of pressure to just eat, and then leave.

You’ll have to take my ordering advice with a bucket of salt, because the menu changes every day (but I go so often that most of the big-ticket items are covered in this article). Pictures from the latest visit are down the bottom.

The raw 11 day aged Mooloolaba broadbill, pink pomelo, dill and fried bread ($24) is still my favourite dish. I mistook the pomelo for grapefruit, which confidently accompanied the broadbill. I wasn’t hankering after a standard mayo-like element to bind the tartare, because it tasted so fresh with the dill. I’ve been back and ordered a similar version with raw diced Mooloolaba MSC Albacore and Broadbill, sour cabbage and egg yolk ($24), and it was also a highlight. The flesh-to-cracker ratio is on point.

Coffs Harbour snapper eye chip and smoked eel ($6 each) is a crunchy delight, reminiscent of the broadbill’s fried bread. Saint Peter has the best pork-belly style chips (these would accompany all raw fish dishes–ever–if I had it my way).

After seeing the lady next to me order fish and chips on my first visit to Saint Peter, I asked my dad to order the batter-fried Wollongong blue spotted flathead, chips and condiments ($28) on the second visit. I can never go back to normal fish and chips now. The chips weren’t hiding behind special flakes, salts or flavours– just simply, quality thick cut. The batter is so light, you don’t feel like you need a detox afterwards. Included in the condiments are aioli and tomato sauce. The tomato sauce was unusually (yay!) lacking in sweetness.

The Flinders Island line-caught calamari with enoki mushroom and ink sauce ($26) was not what I was expecting. I loved the ink sauce, and of course, the texture of the enoki and calamari worked so well together. I was confused about the intention of the dish though. Why was there the random pastry sheet? I guess it was trying to create texture or to bring an element of surprise as it tones down the impact of the sight of the ink, which could be confronting for some people (?) The produce is just so well treated, disappointment is impossible. You’re predominantly tasting the actual calamari.

As one of my favourite seafood snacks, I had to order the salt and pepperberry Yamba whitebait ($18). I loved the tempura-style batter and was surprised how fat these babies were. You didn’t notice their bones as much as usual, and they were juicy.

I have been waiting to consume Josh Niland’s custard tart ($16) ever since I first heard of it on the menu. The hype was accurate. It wobbled; it was smooth; it was custardy. A simple staple done well. The lemon tart ($18) is just as sleek.

By contrast, the hand-filleted Yamba sardines and anchovies in fennel oil ($20) was not worth the hype. They lacked flavour (beyond saltiness) so that you were really just there for the oil. The rye bread accompaniment was stellar, but the sardines at Bert’s are better.

Hand picked Ballina Spanner crab meat, with coral sauce and puftaloons ($32) has got to be one of the most delicious items on the menu (mostly down to that flavoursome coral sauce). A puftaloon is an Australian invention–a fried scone. Halfway between a crumpet and a muffin.  I would prefer either of the latter, or something  less dense, crispier and thinner.  These puftaloons had a slightly fermented taste, on which house-made butter melted pleasantly.

I tend to find the fish mains here are hit and miss (perfectly cooked, but falling short on flavour and complexity). That is, taking value for money into account. It all depends on the sauce and the skin. Niland is the master of fish skin, among other things. Barramundi with BBQ eggplant and egg dressing ($40) was a middle-of-the-road affair, whereas Mooloolaba Flametail Snapper with burnt tomato won me with the garlic mayonnaise ($42).

Saint Peter’s brunch is arguably even better than the food on offer at dinnertime. I’d say the Newcastle Red sea urchin crumpet ($28) is a life-changing dish, especially for people who haven’t ever tried it. Crunchy and golden, topped with creamy uni. I also tried the Mooloolaba Broadbill belly bacon and egg English muffin with a smoked bonito hash brown ($24). Since then, I’ve purchased the Broadbill (swordfish) belly bacon from the restaurant’s butcher, Fish Butchery, because it’s such a great substitute for normal bacon. It’s very ‘fishy’, so didn’t work as well in carbonara as I’d hoped. Nonetheless, it’s definitely crispy enough for a BLT. The English muffin, like the crumpet, is a winner. The hash brown, sadly, could not compete with Macca’s finest. It was not crispy enough on the outside, too dense, and undercooked on the inside.

This review has been written (and added to) over the course of time since Saint Peter first opened. Since then, some of my regular orders include their beautiful bread and cultured butter ($3) and the raw diced Mooloolaba big eye tuna, sour cabbage and egg yolk ($26). I’ve also discovered that the best fish mains are paired with burnt tomato and garlic mayonnaise, such as Bowen Line Caught Coral Trout ($52).

I’ve gained a lot of inspiration from the Saint Peter style other than a no-waste, gills-to-tail approach. Josh Niland cooks with grapeseed oil, which he says is the key to making fried fish taste light and fresh. I also want to invest in the weights they use to place on top of the fish, to evenly crisp-up the skin. I can never eat normal battered fish again, after having Niland’s light and crispy versions.

When I was working for Good Food I also got to try Josh Niland’s hot smoked salmon and its crisp skin, pickled beetroot and rocket. See my article and recipe here. Genuinely the best sandwich I’ve ever eaten. 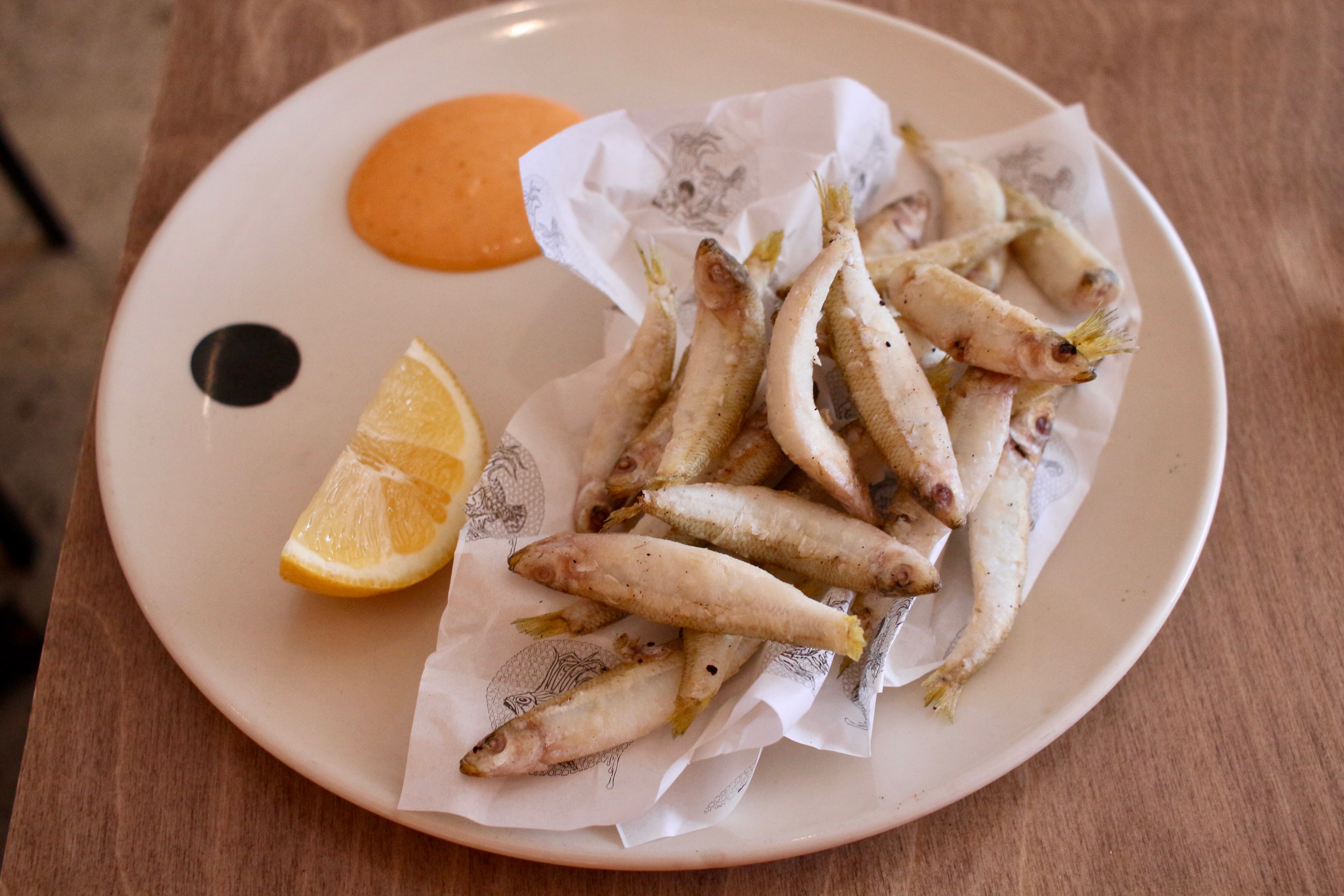 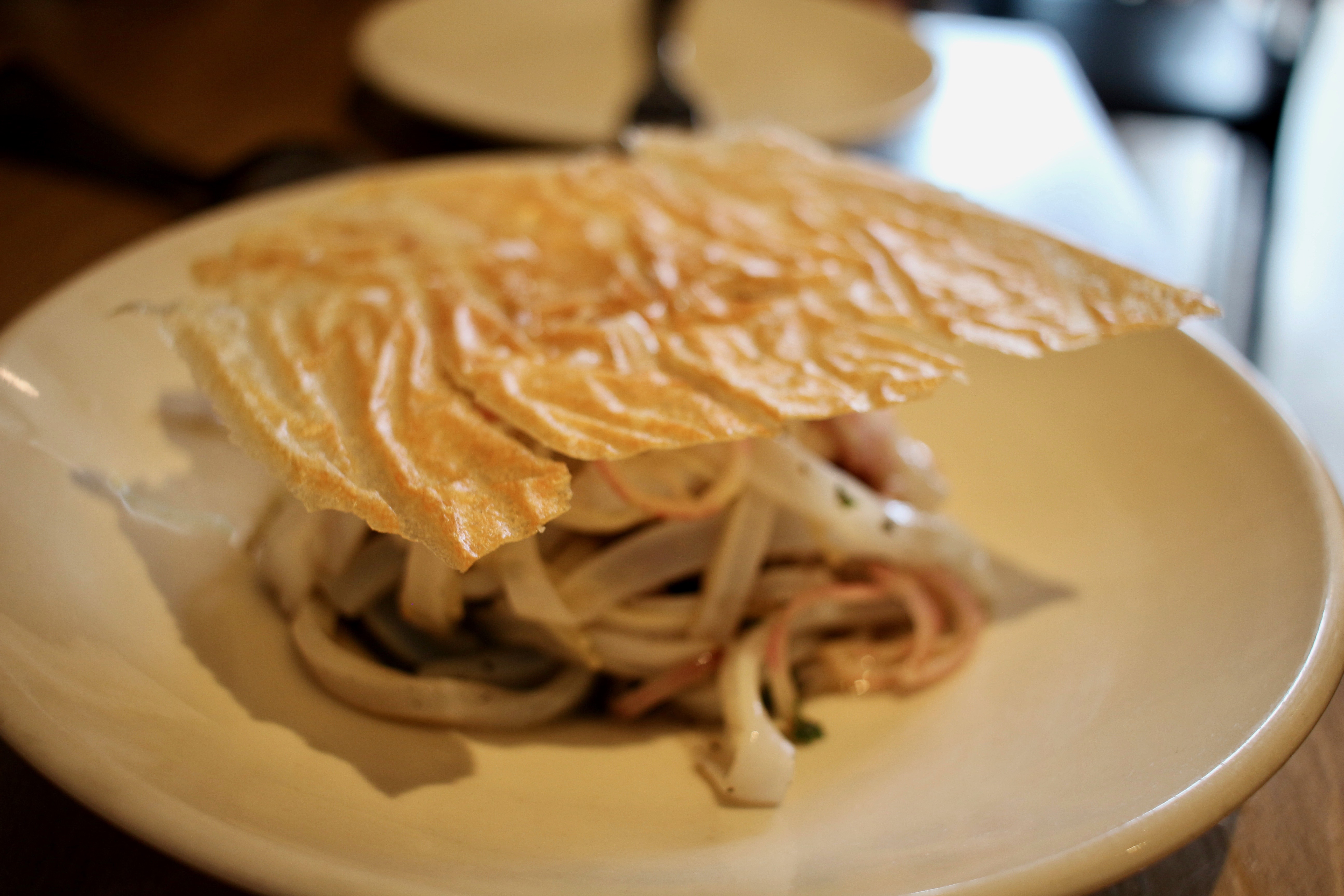 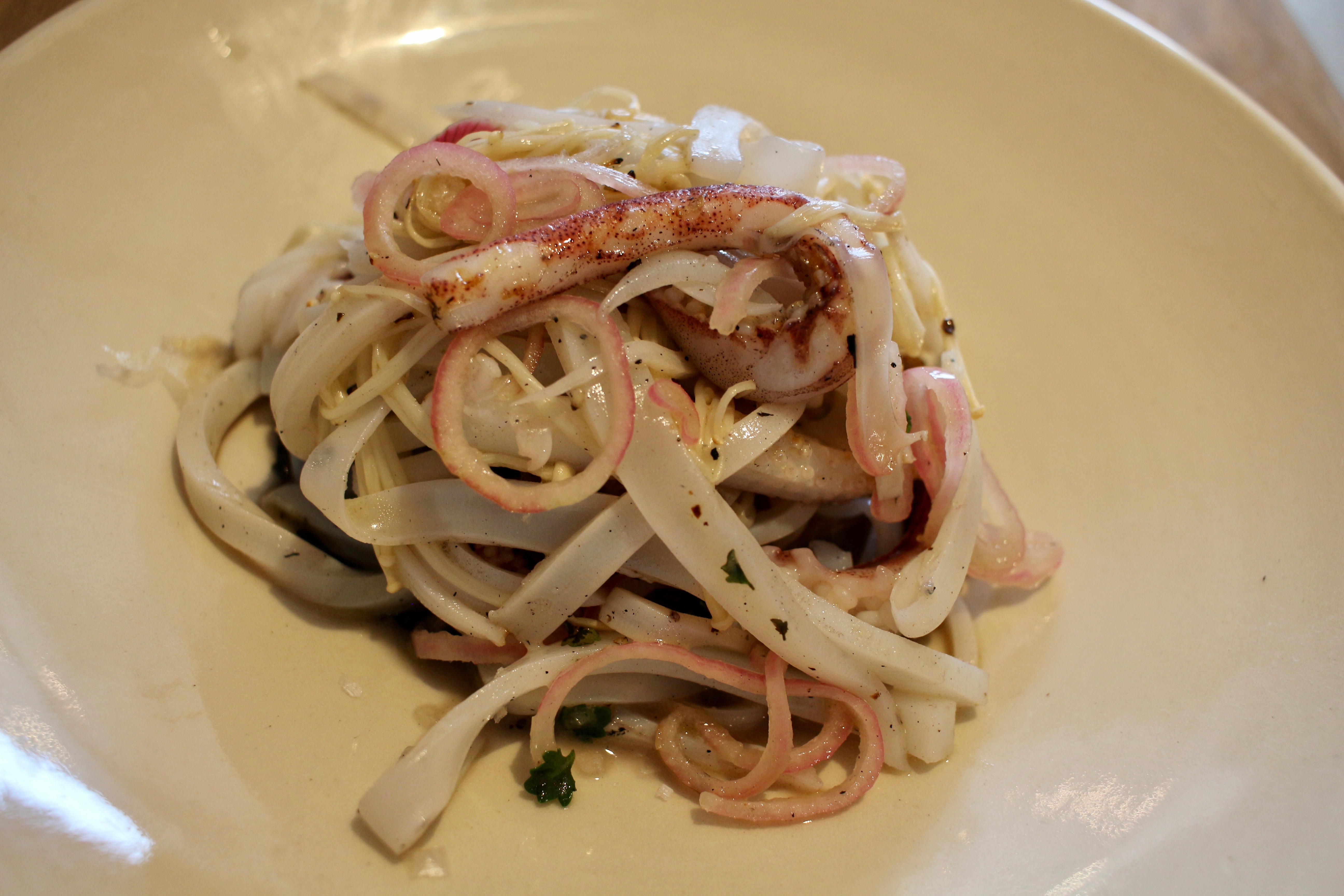 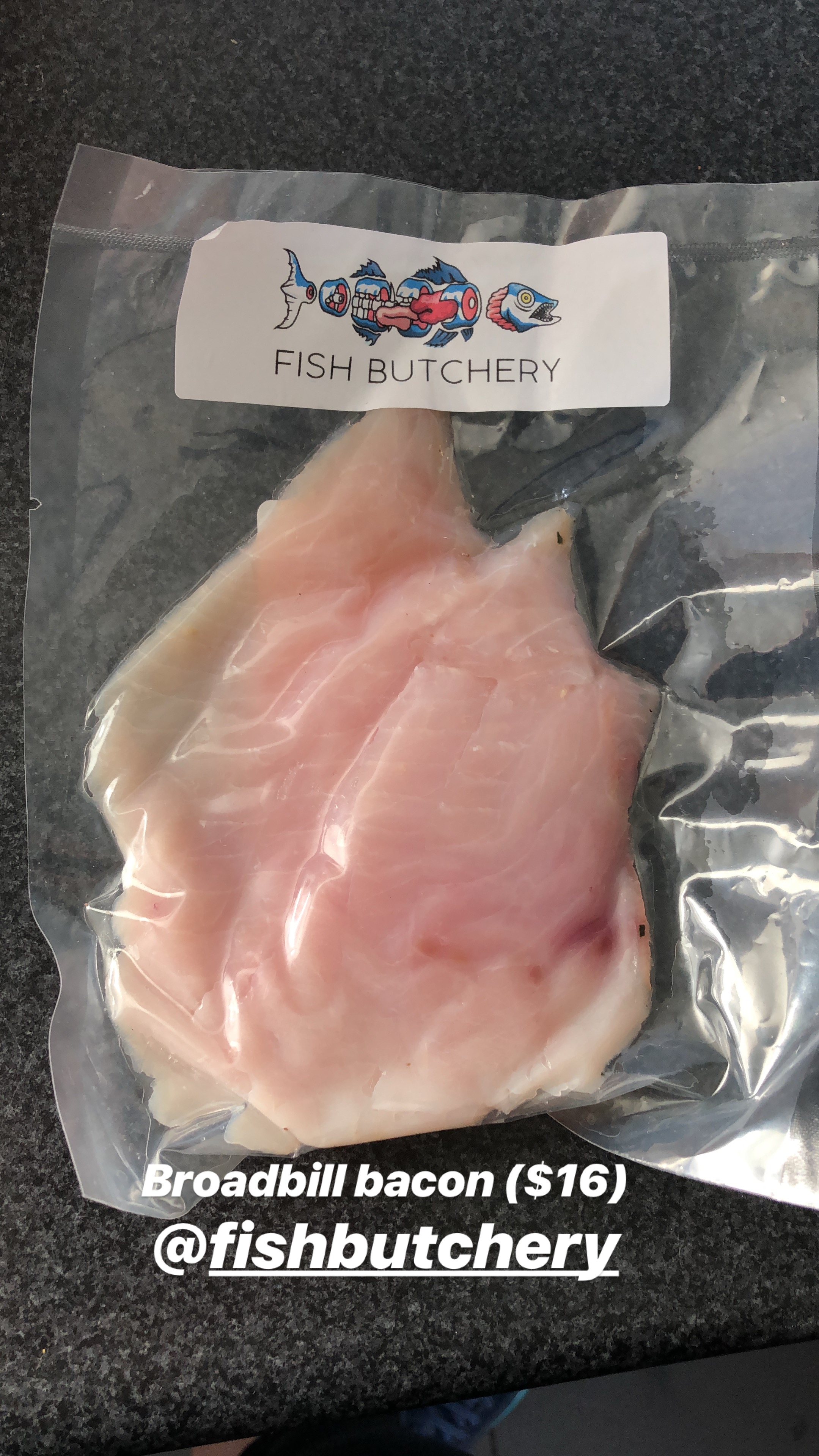 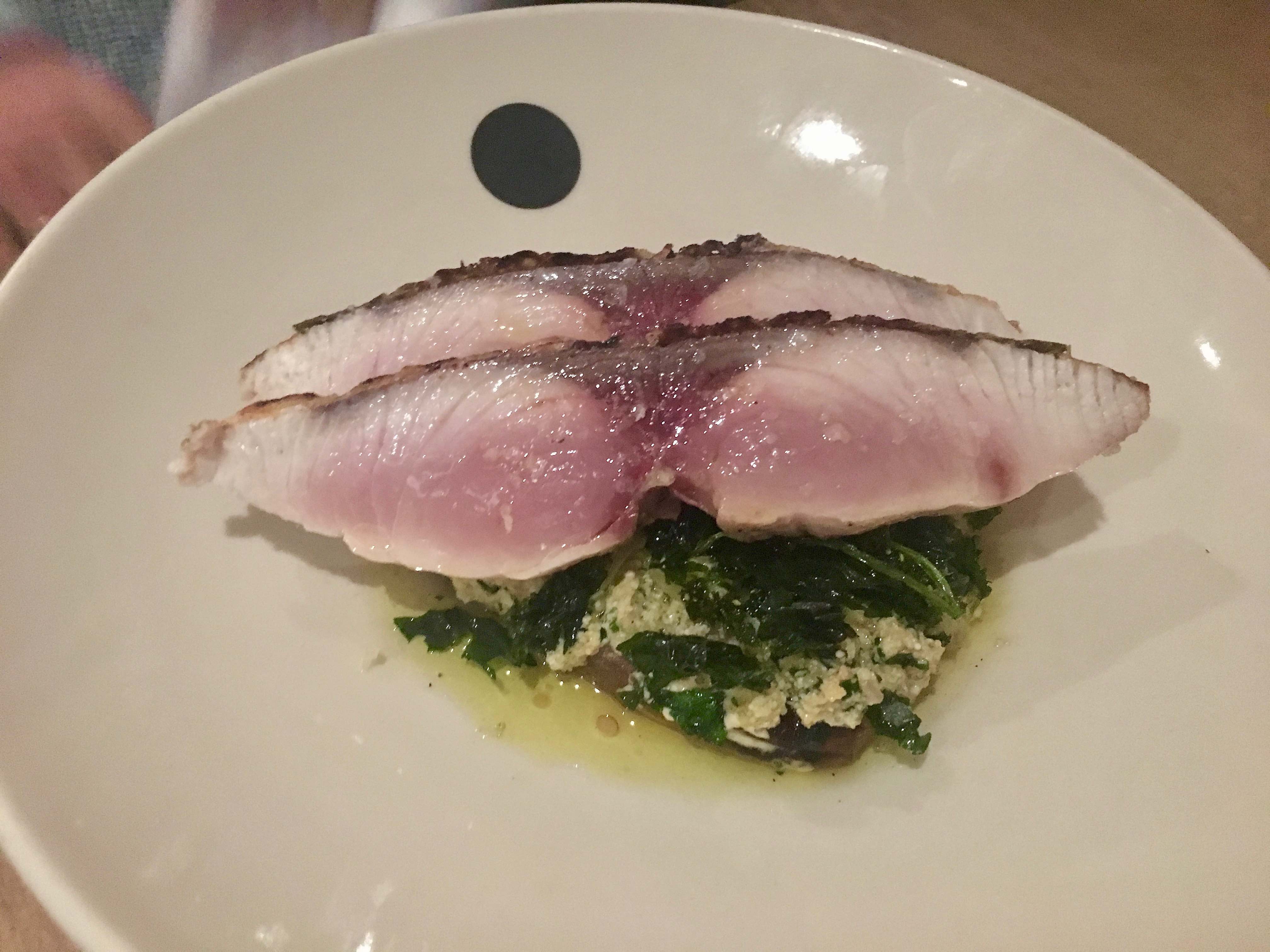 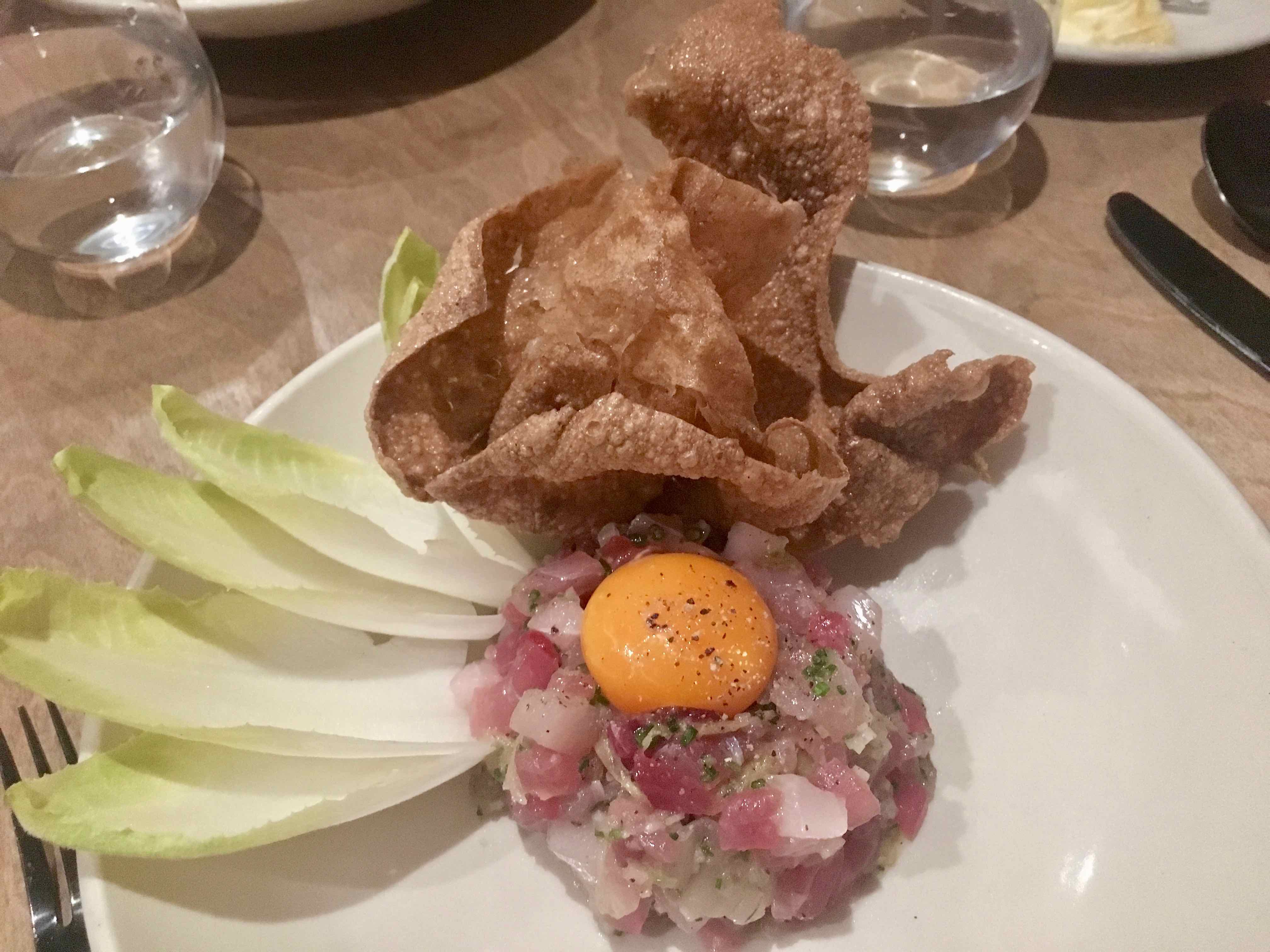 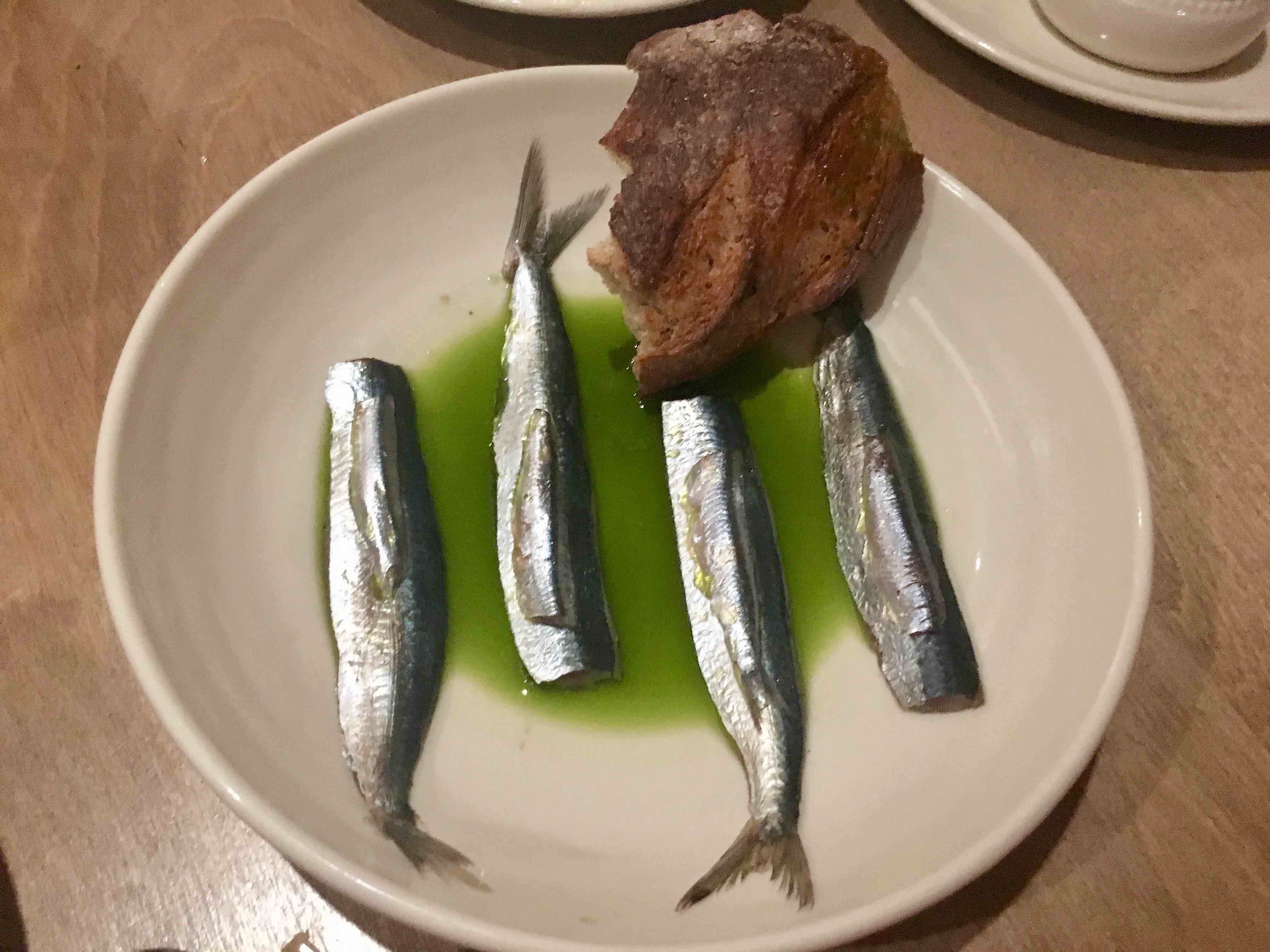 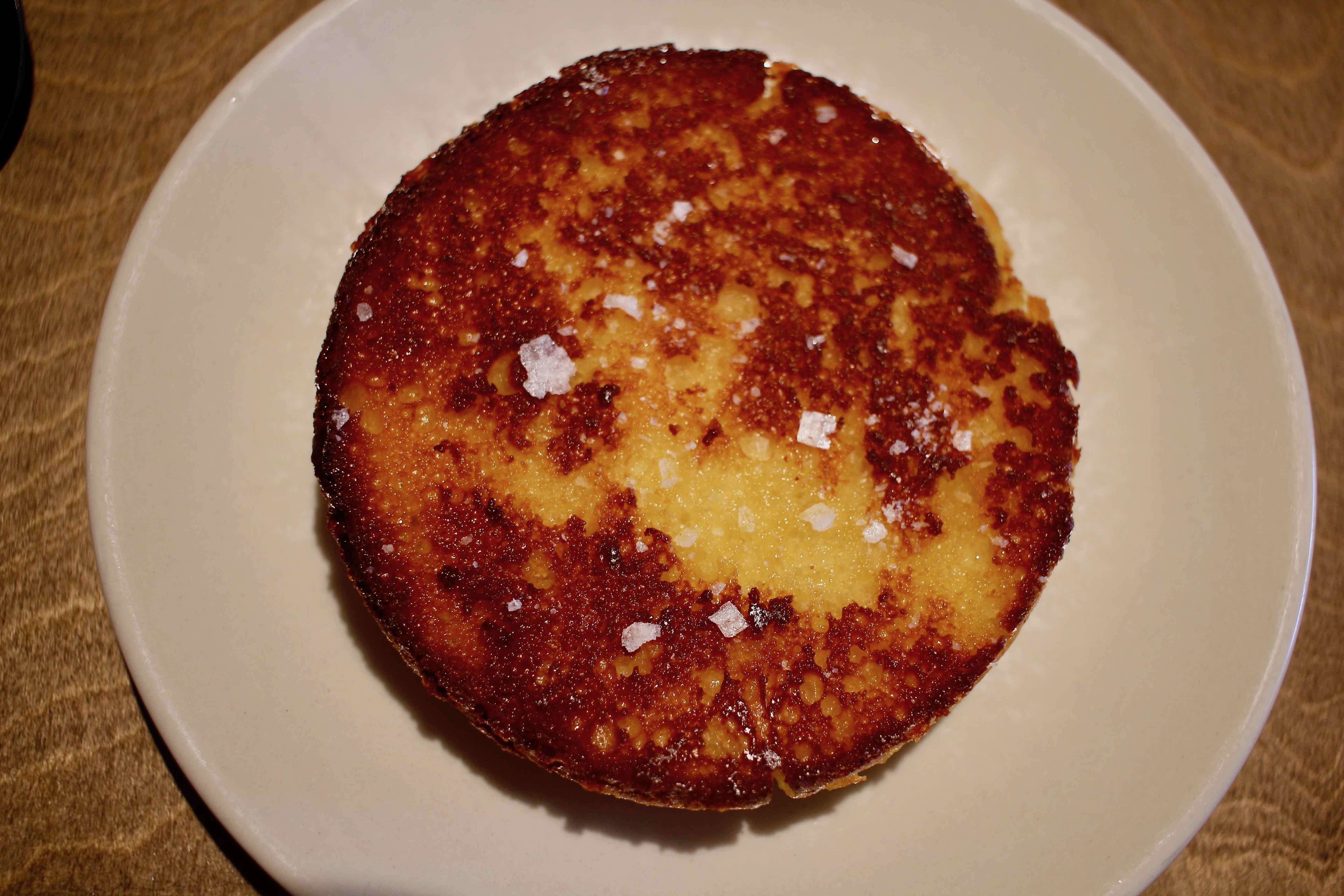 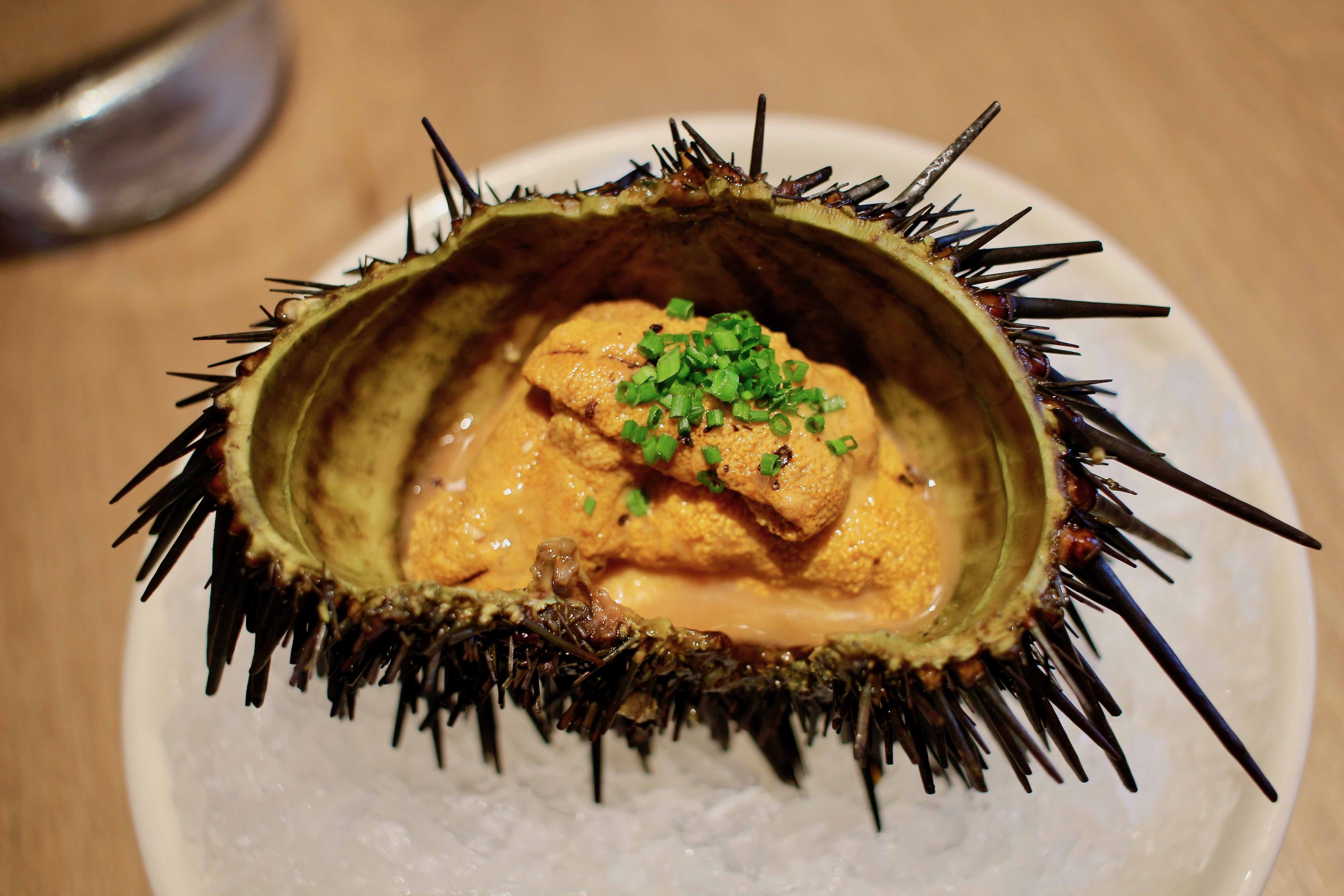 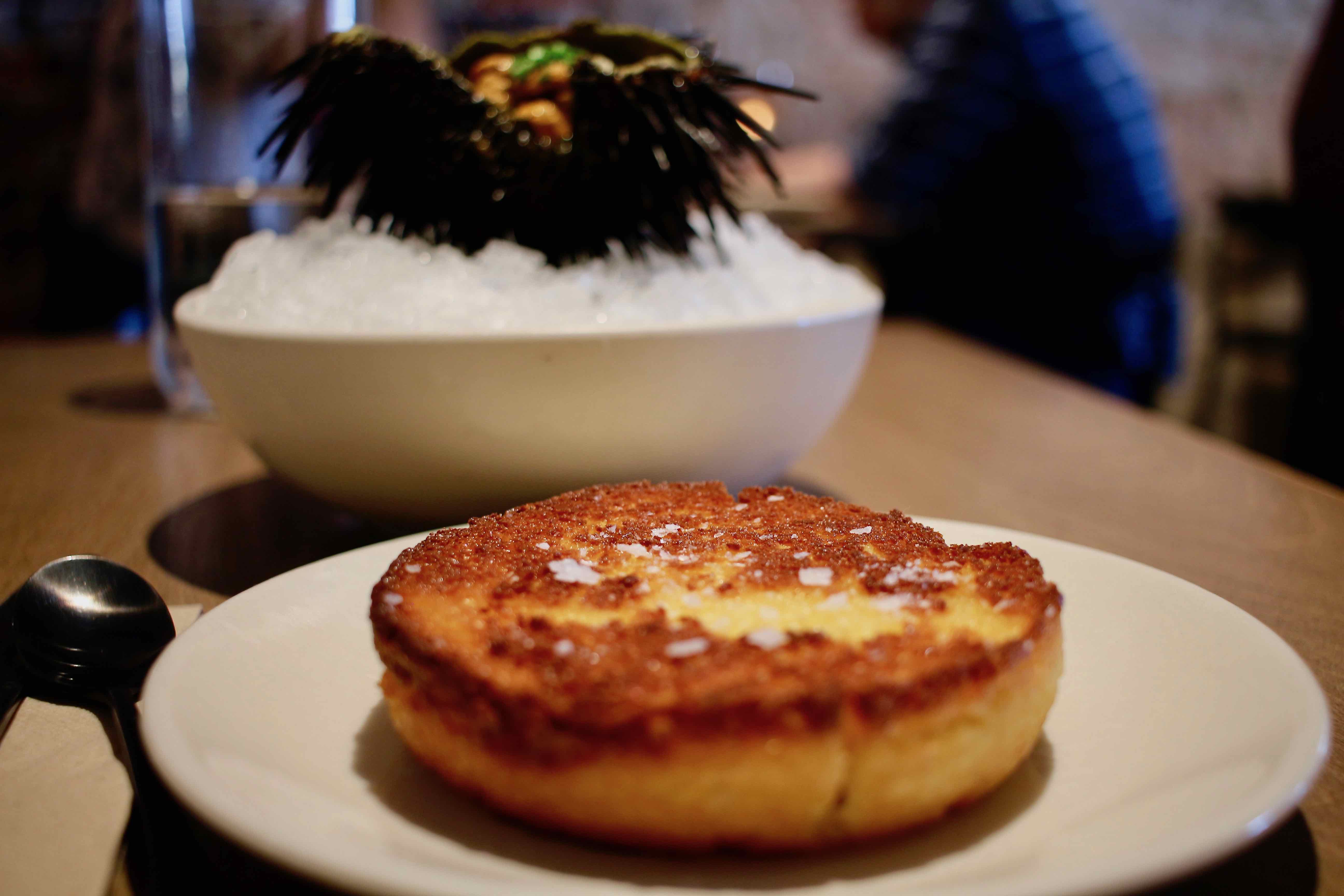 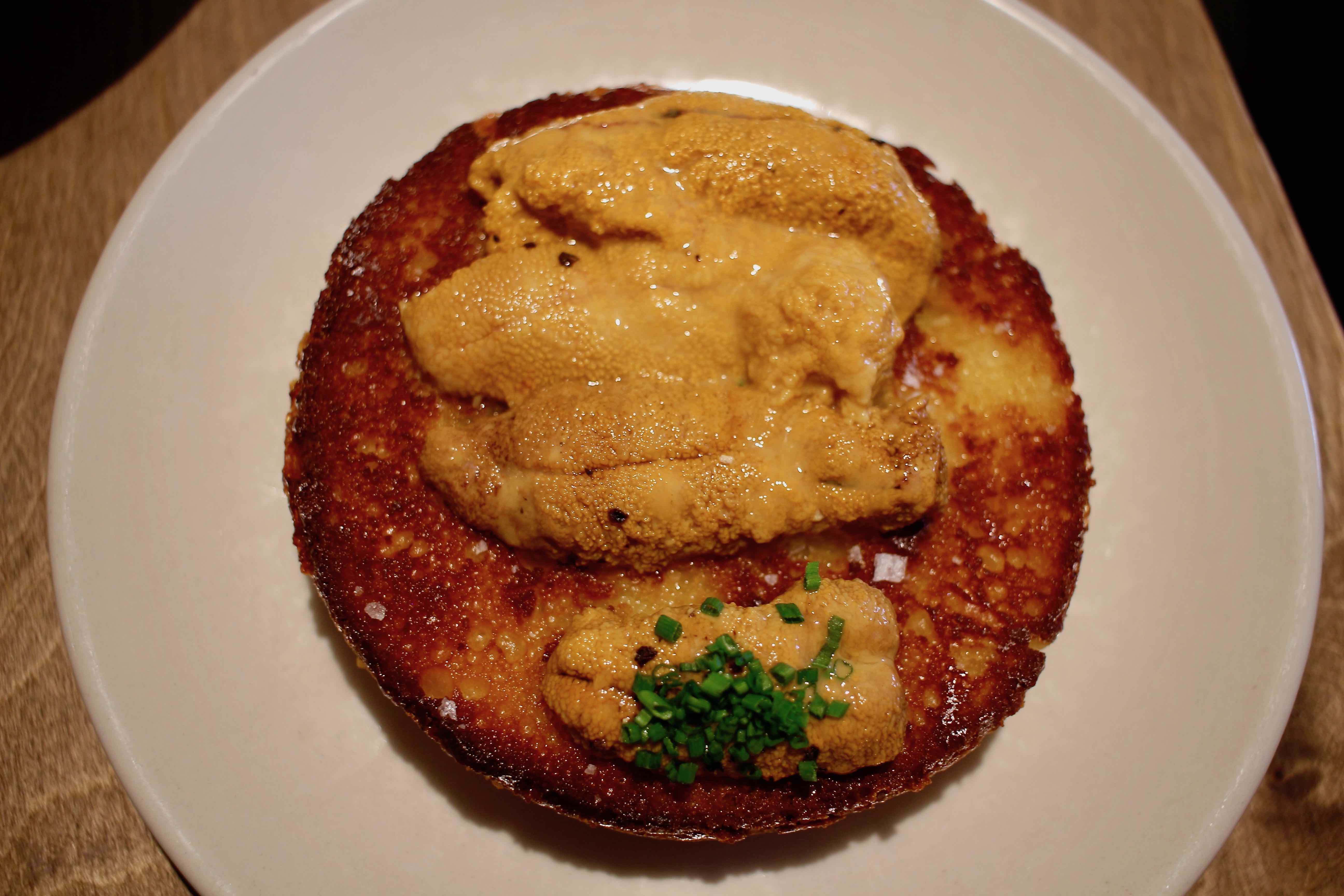 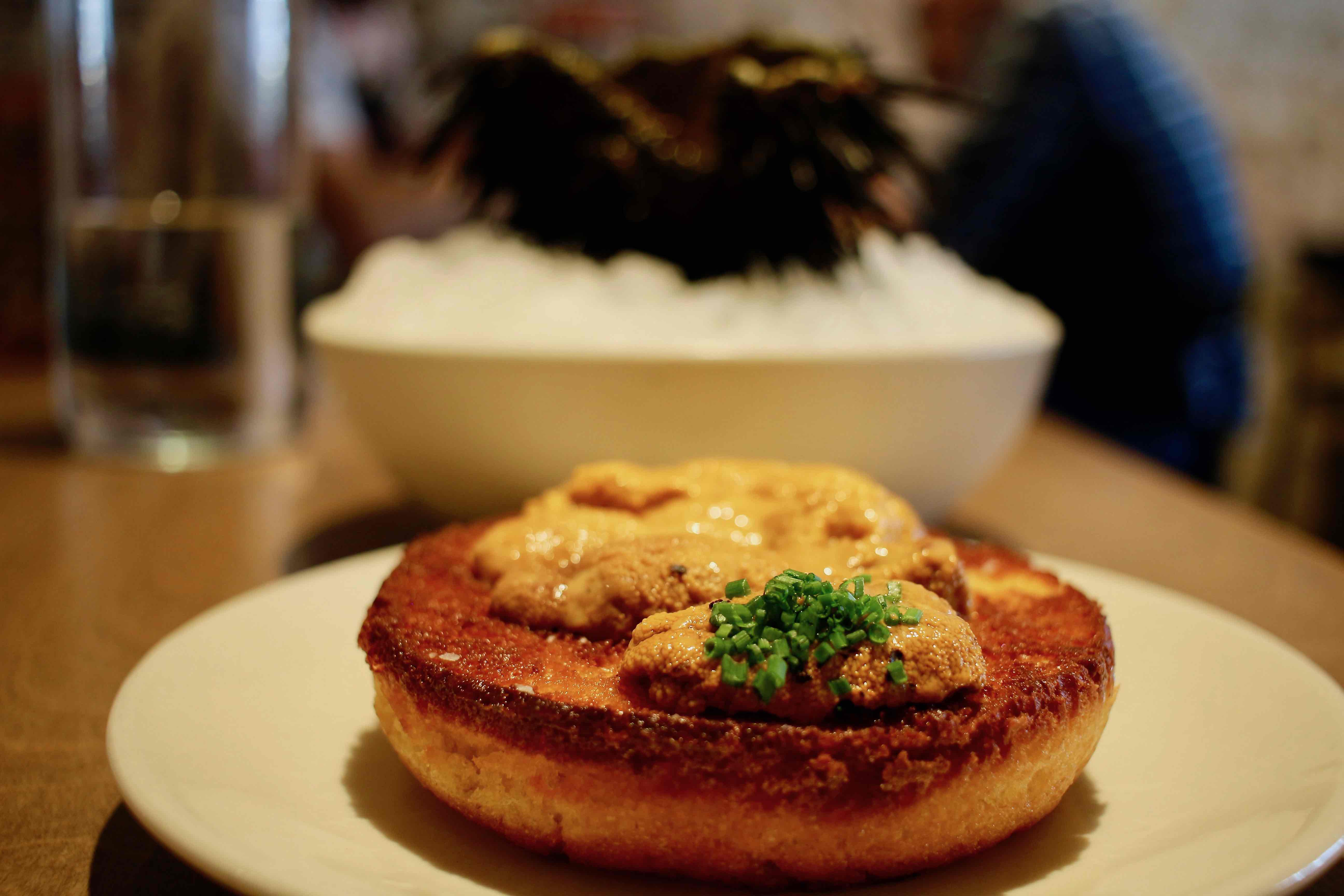 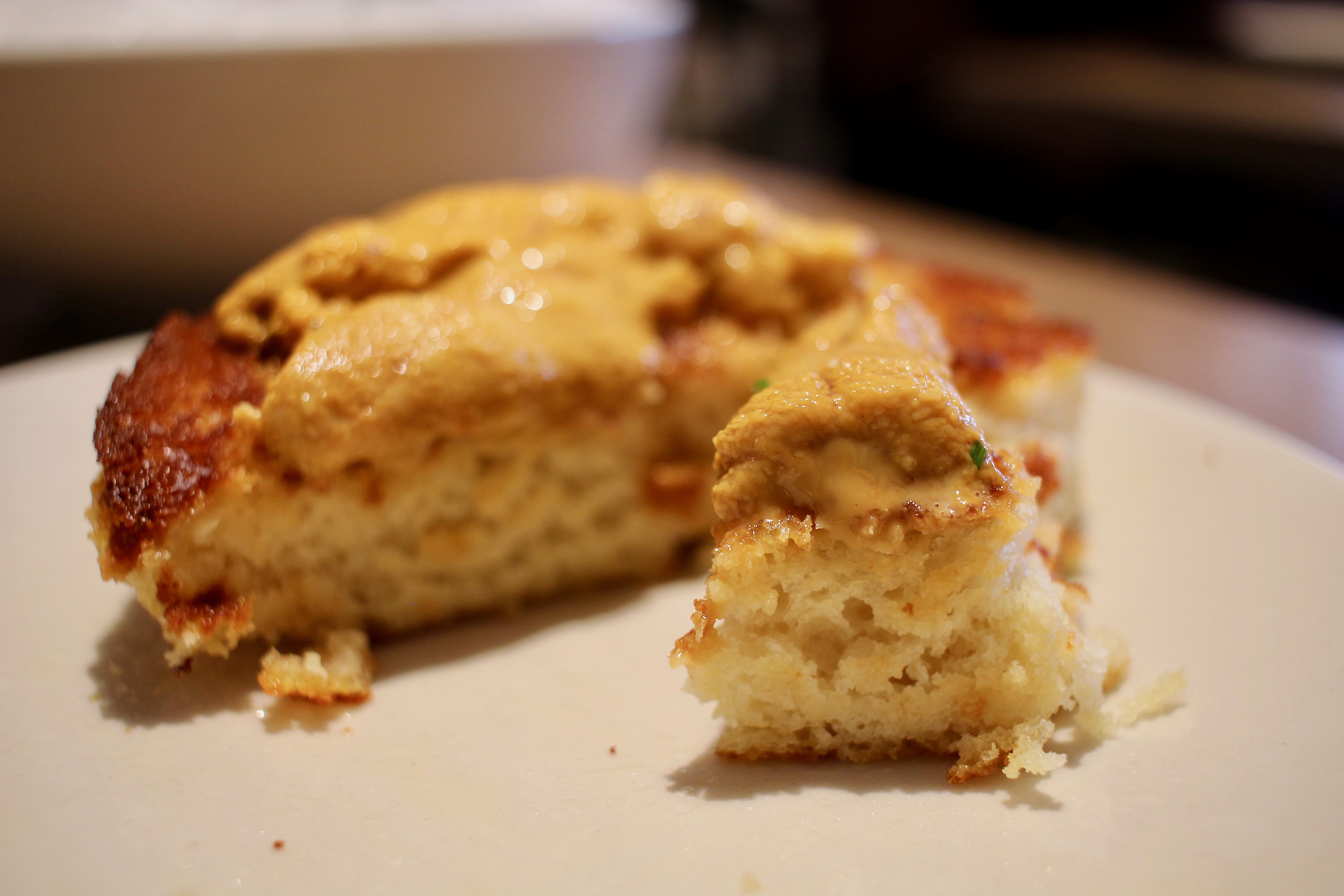 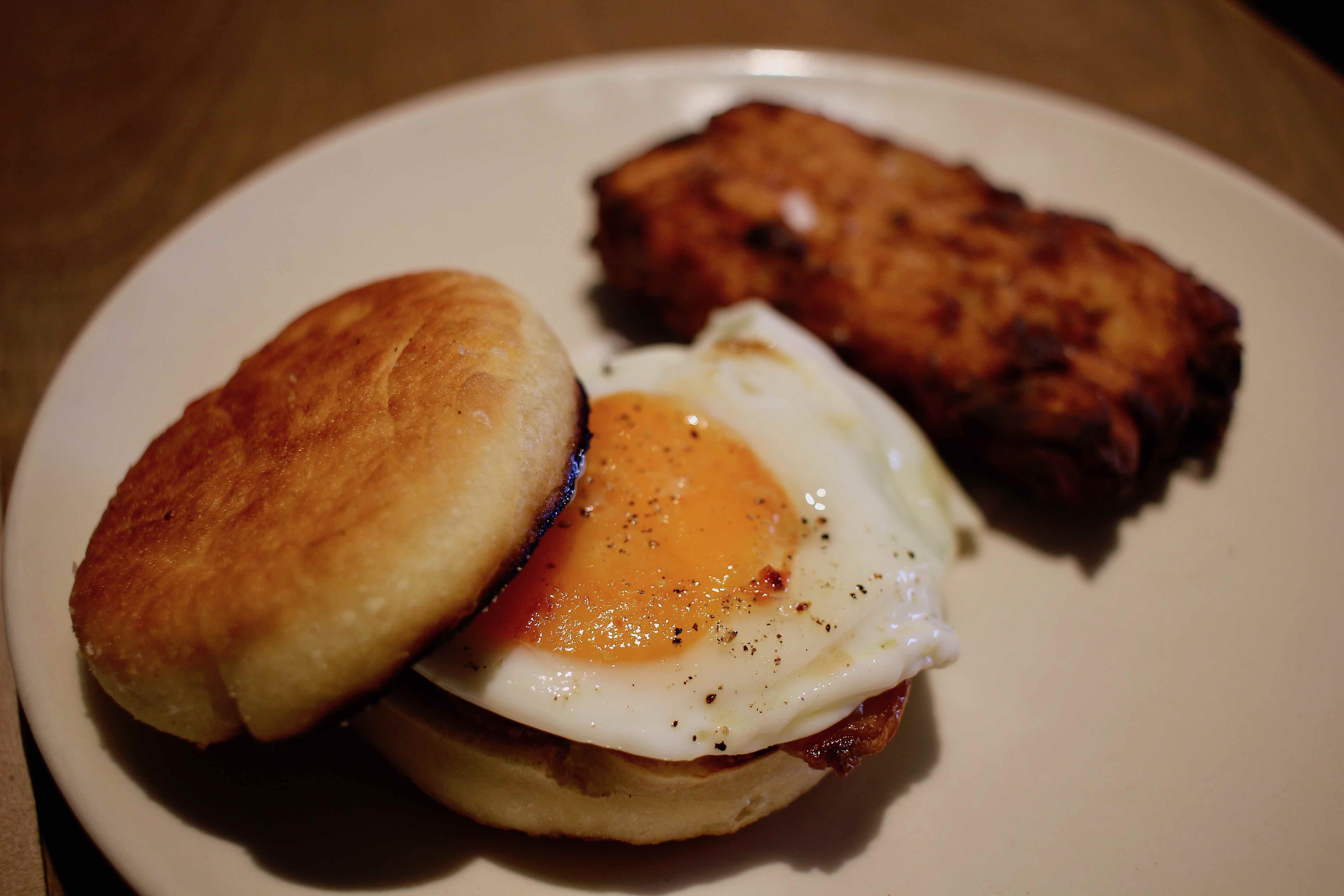 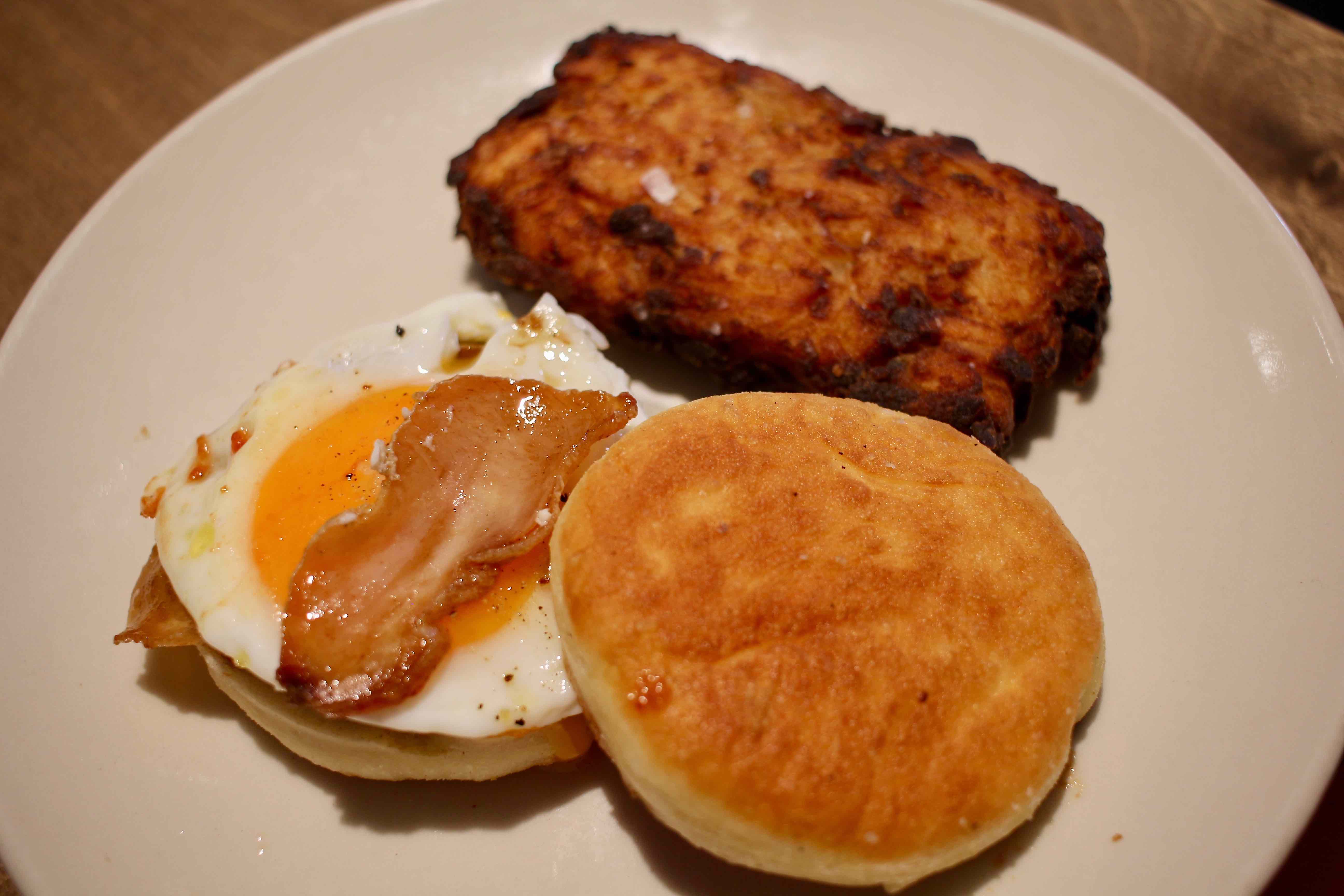 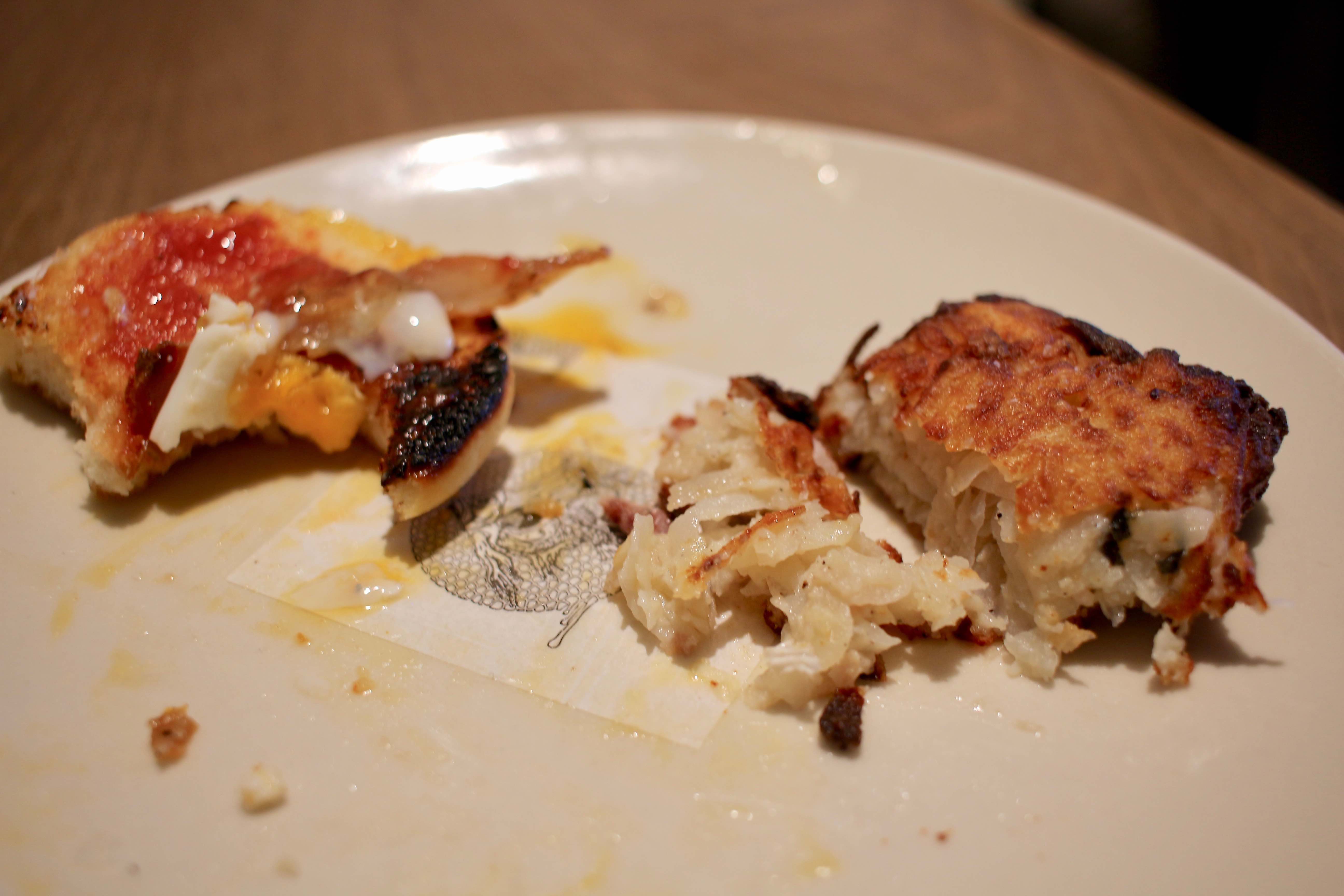 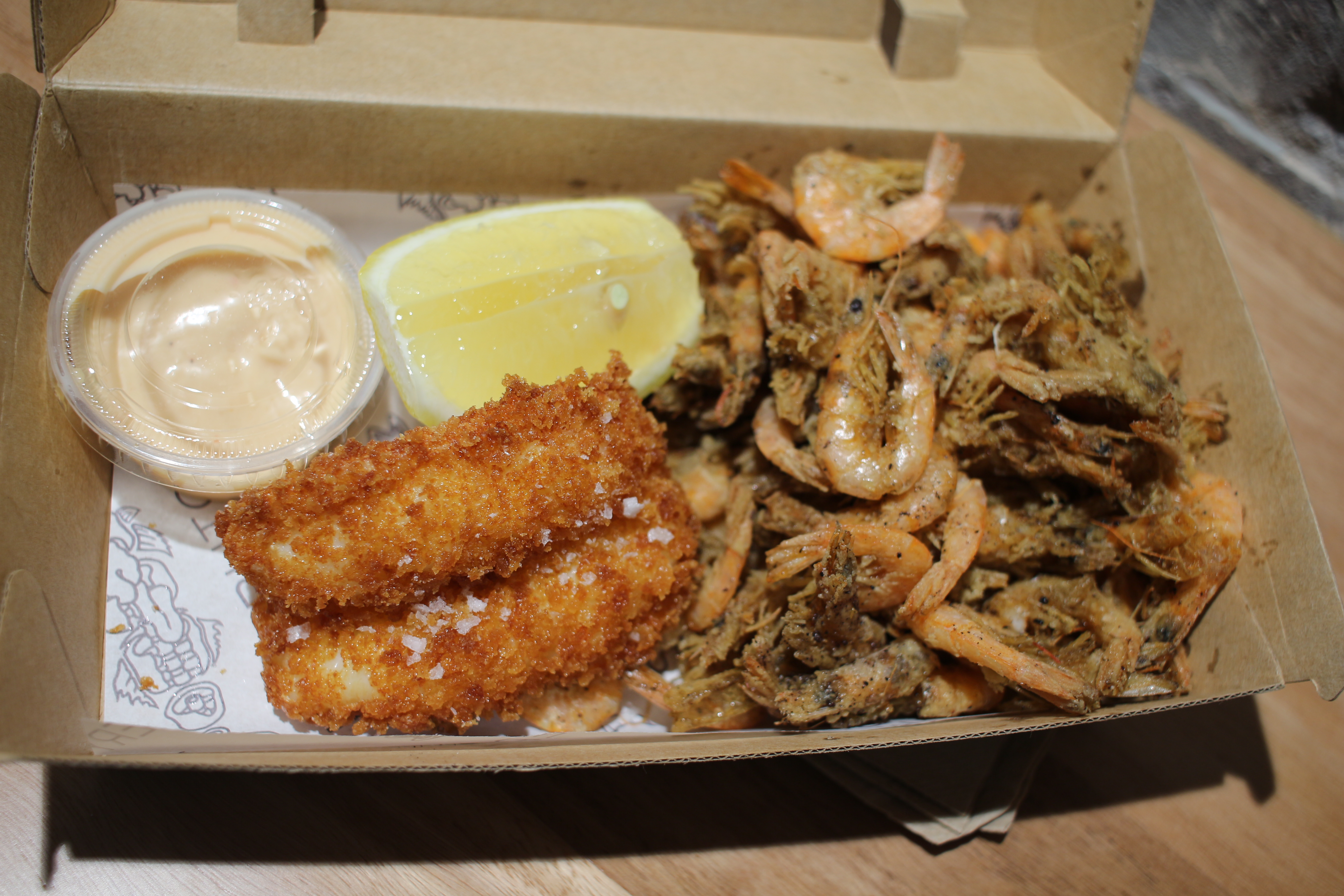